Only half of the nation’s aged care residents have been vaccinated in the past six weeks, falling well short of the government’s original plan to have all residents and workers vaccinated within that time.

The only aged care workers to have been vaccinated were a small number who happened to get doses left over from when residents had their appointments. In a departure from the original plan, the remainder must go to GP clinics or pop-up clinics to receive their vaccines. 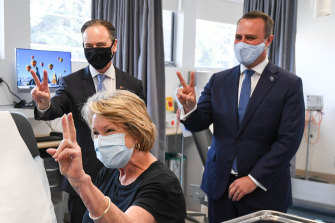 By Tuesday evening, early in week six of the rollout plan, more than 99,000 residents across 848 facilities have been vaccinated. There are about 190,000 aged care residents living in aged care homes across the country.

“That takes the national total to 670,369 vaccinations and so what we are seeing is very significant progress,” he said.

But it remains unclear exactly how many aged care staff have received their first doses at any facility across the country.

In a statement, a health department spokeswoman said current best medical advice was to not vaccinate residents and large numbers of staff at the same time, to avoid staffing shortfalls from mild side effects after vaccination.

“The Australian government continues to work with the aged care sector to roll out COVID-19 vaccines to aged care residents and staff safely and carefully,” she said.

Two aged care providers said the rollout had been mixed, with some facilities receiving doses on time while other facilities had their vaccination bookings cancelled at short notice. The only staff at both providers who have been vaccinated so far had received leftover doses from the resident rollout.

Annie Butler, federal secretary of the Australian Nursing & Midwifery Federation, said there were ongoing worries with the pace of the aged care rollout.

“We are getting concerned for our members that the rollout is just not getting to the facilities fast enough,” she said. “If the virus gets into aged care, the consequences will be devastating … so we need to make sure that they’re protected.”

The spokesperson for one large provider, which didn’t want to be named because it was generally supportive of the rollout and being included in phase 1a, said the vaccination teams had treated residents well and communicated with staff.

The real problem was getting the vaccines on the ground, with some facilities having bookings cancelled at short notice with no new dates confirmed. “When the teams roll up on time it’s great,” the spokesperson said. “It’s been a shame when it hasn’t happened.”

The large provider, which has facilities in more than one state, said so far the only vaccinations staff had received were ones left over after all residents had been vaccinated.

“There’s no denying we’re behind,” the spokesperson said.

The spokesperson from another aged care provider, who also spoke on the condition of anonymity because they did not want to be publicly critical of the government, said their staff were meant to start receiving vaccines in early April.

“But we’re not confident, there have been delays all over the place,” the spokesperson said.

Staff for that provider have also received some leftover doses, but most would be getting their vaccines through a mix of GP clinics or pop-up vaccination hubs. So far, the spokesperson said there has been no information about how that will work.

The Health Department spokeswoman said aged care staff had several options for vaccination. They could access vaccinations through GP clinics or Commonwealth respiratory clinics, she said, and some would be able to get vaccinated at their facilities.

“From mid-April, aged care workers will be able to access a COVID-19 vaccination through dedicated worker vaccination clinics,” she said.

Ms Butler said the initial plan to vaccinate residents and workers at the same time was changed because of supply issues with the international AstraZeneca doses.