The virtual gathering blows up over a tweet calling Rinna a racist.

Denise Richards was once again on the defensive as “The Real Housewives of Beverly Hills” convened over Zoom for one feisty reunion special for the latest season.

While the women were all in the comfort of their own homes, the drama spilled over between them all — with Richards right in the middle.

The first half of the hour covered Kyle Richards and Garcelle Beauvais’ beef — which we’ll break down in-depth tomorrow — and how some of Sutton Stracke’s comments rubbed the women the wrong way. But, after that, it was all about Denise. 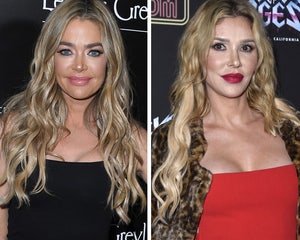 The question asked by Andy Cohen: Who is the real Denise Richards? Is it the woman who appeared on her first season talking about happy endings and her husband’s big penis … or the one viewers got this time around, who was uncomfortable with conversations about threesomes?

Richards has maintained her big issue was the subject of threeways coming up at a pizza party she threw where her kids were also within earshot, though the other women felt like she was just saying that to make them look bad and change her own image.

As the topic came up during the reunion, Richards asked “when was the last time we’ve ever talked about sex” with their husband’s around. The ladies — Erika Jayne and Teddi Mellencamp-Arroyave in particular — were the first to point out it was Denise who actually brought up Aaron’s manhood at the pizza party, setting the precedent for the night.

“You bring up your husband’s penis almost every show!” exclaimed Lisa Rinna.

Teddi and Erika explained they believed Denise was trying to make them look “like assholes” by complaining about them talking about sex around her kids.

“I think she was trying to make us as a group look bad. We had our table, their table, we always have adult conversations, that’s what we do as a group, and then all of a sudden we’re penalized for that?” said Erika.

Despite it turning into a multi-episode thing, Denise said she was never upset — causing Erika to exclaim, “Am I on another f–king planet?”

The frustrations intensified when talk then turned to a tweet Richards liked amid the feud saying Rinna was a racist who should be fired. 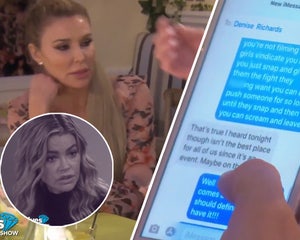 The tweet said: “Absolutely fire @LisaRinna. She’s not only a bully but she claims she’s not racist. There’s proof in photos and this says otherwise. Go pat your puss somewhere else and take Erika Jayne with you. Has @ErikaJayne apologized to Sami and Lola yet??? Or to @Denise_Richards?”

Bravo didn’t show the photos, though Denise claimed she “accidentally” liked the tweet without reading the whole thing.

“I only saw the comment about Erika and I didn’t know there was a picture underneath it,” said Denise, who added she “deleted it right away.”

“Denise, you liked the tweet and in liking the tweet, it says everything,” an angry Rinna hit back. “You did it in a public forum! You liked a tweet like that, that was so vile and so nasty, you knew exactly what you were doing. Don’t you f–k around a lie to me about it.”

When Richards asked why she revoked her like then, Rinna told her, “because you got called out!” She added, “Because Bravo f–king called you and said take it down. F–king shut up. Denise, you lie, lie, lie, lie, lie.”

Rinna continued to rail against Richards when Denise claimed her daughters do not watch the show and have only heard things about it from their friends.

“Bullshit! Your kids watch the show, bullshit!” she shouted. “Then their friends watch it and tell them!”

“Did they hear about the happy endings?” Erika chimed in. “Or do they just hear the bad things about us?”

The hour ended with Andy asking Richards whether she was “consciously trying” to change her image this season after her more explicit debut.

“No, I felt really uncomfortable early on in this season with the women, where I felt like I was on the receiving end of being a target,” replied Richards. “Here’s the thing that I am confused by, agree to disagree and move on from it. I wasn’t the one who kept bringing it up every single dinner.”

Again, Richards did her best impression of The Chicks.

“Yes you were! Gaslighting, gaslighting, let’s have some gaslighting!” she exclaimed. “That’s what I have to say about all this bullshit. All gaslighting.”

The feuding continues next Wednesday on Bravo.