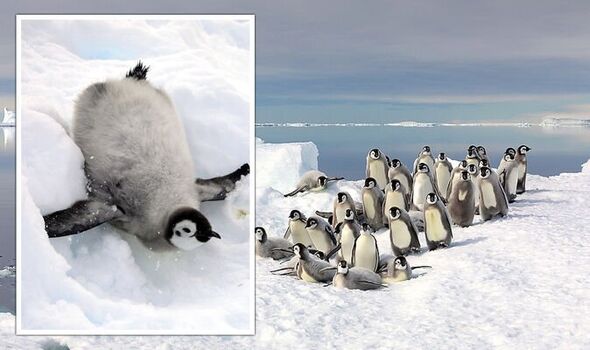 The chilling warning comes from a producer behind tonight’s heartbreaking first episode of the BBC’s Frozen Planet II. The show, narrated by Sir David Attenborough, looks at the challenges penguin chicks face when they are abandoned at just 12 days old.

The flightless birds breed on sea ice, but chicks cannot survive in the Antarctic waters until they shed their down feathers.

Global warming puts them in danger of being wiped out, as ice floes break up, sending the youngsters plunging into the freezing depths.

Alex said: “If the ice breaks up earlier, whole colonies, thousands of chicks, could be wiped out in an instant. If we don’t slow down climate change, emperor penguins [are] looking at extinction by the turn of the century.”

He admitted he was tempted to save stricken chicks while filming, adding: “You feel like you want to intervene, to pick that penguin up, put it back the other side of the crack [in the ice]. But you have to remain objective.”