Three of the women sexually harassed by former High Court judge Dyson Heydon have reached a financial settlement with the Commonwealth government.

Rachael Patterson Collins, Chelsea Tabart and Alex Eggerking made the claim under the Sex Discrimination Act, commencing their action after the High Court publicly apologised in June 2020 to six women whose claims of sexual harassment against Justice Heydon were upheld by an independent investigation. 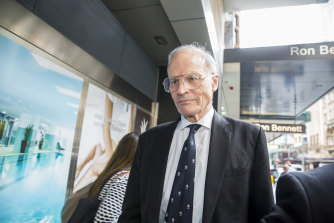 In 2020 The Sydney Morning Herald and The Age published an extensive investigation into allegations against Justice Heydon, including reports he sexually harassed women in the High Court, at the University of Oxford, at a Canberra University event and at the private club he stayed at while court was sitting in Canberra.

Justice Heydon issued a statement through his lawyers denying “emphatically any allegation of sexual harassment or any offence”.

“In respect of the confidential inquiry and its subsequent confidential report, any allegation of predatory behaviour or breaches of the law is categorically denied by our client,” the statement said.

“Our client says that if any conduct of his has caused offence, that result was inadvertent and unintended, and he apologises for any offence caused.

“The inquiry was an internal administrative inquiry and was conducted by a public servant and not by a lawyer, judge or a tribunal member. It was conducted without having statutory powers of investigation and of administering affirmations or oaths.”

The settlement amount took into account actuarial material designed to model the loss of the kind of career a former High Court associate would normally have. High Court associateships are highly sought after and only awarded to the brightest legal graduates. None of the three women claimaints still work in the law.

Attorney-General Michaelia Cash said in a statement that “the Commonwealth has taken these claims very seriously”. “The settlements we have reached are consistent with that,” she said.

“We recognise Ms Tabart’s, Ms Eggerking’s and Ms Collins’ bravery at coming forward and telling their stories to Dr Thom, the High Court and other Australians. These women have told us about what they have been through during, and since, their times as Associates of the High Court and the serious impacts on their lives.

“We have listened to them and we apologise.”

The women were represented by Josh Bornstein of Maurice Blackburn.

Mr Bornstein said the women would not comment, but said “they have asked me to convey their strong conviction that women should not feel ashamed to pursue financial settlements in sexual harassment cases”.

“Sexual harassment will only start to recede when there is a clear recognition that it has a substantial cost to organisations and individuals who are implicated.”