Something blue! Duchess of Cornwall recycles favourite Bruce Oldfield outfit as she joins Kate Middleton and her children in their carriage at Trooping The Colour

The Duchess of Cornwall looked elegant in blue as she joined the Duchess of Cambridge at the start of the Trooping the Colour, for the weekend of Platinum Jubilee celebrations.

As Camilla, 74, was driven down the Mall in her carriage, sitting alongside Duchess of Cambridge and children Prince George, Prince Louis and Princess Charlotte, she smiled and waved to the crowds, enjoying the expected excitement of the day. 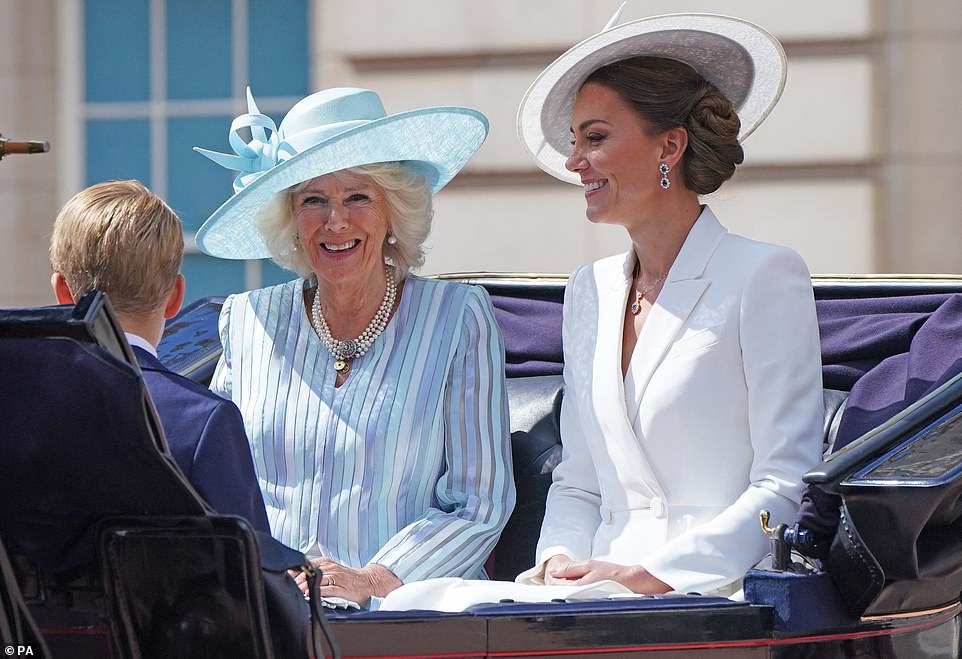 In her favourite Bruce Oldfield striped outfit, pearl necklace and earrings and a blue hat, the Duchess looked graceful and relaxed 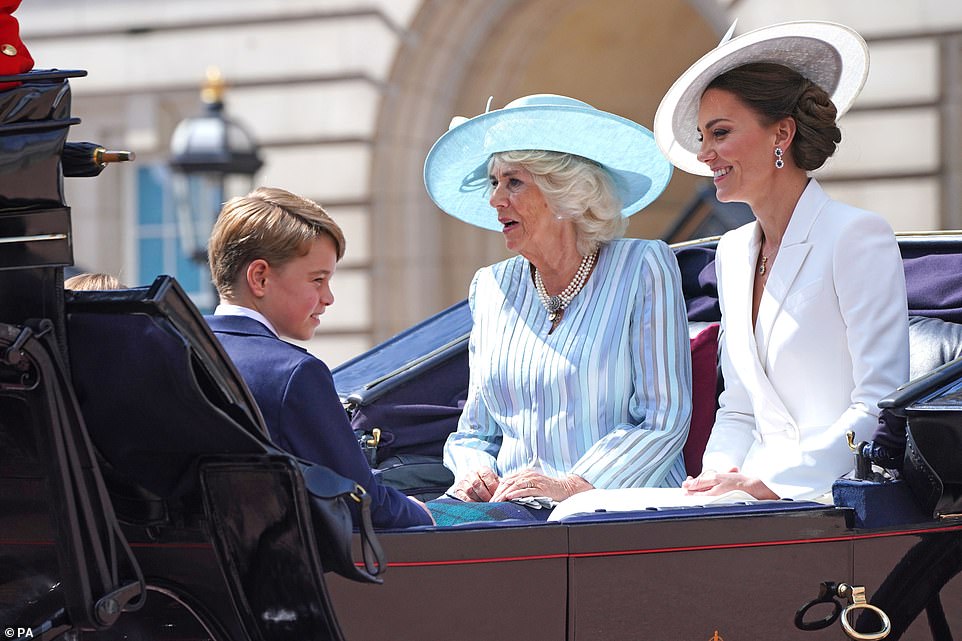 The official programme for the Queen’s Platinum Jubilee begins with the popular Trooping the Colour military spectacle.

The Royal Family travelled from Buckingham Palace along The Mall to the parade ground in horse led carriages, with the Prince of Wales, the Duke of Cambridge and the Princess Royal on horseback.

More than 1,500 officers and soldiers and 350 horses from the Household Division will stage the display on Horse Guards Parade in London, with the colour trooped by the 1st Battalion, Irish Guards.

Some 400 musicians from 10 military bands and corps of drums will march amid pomp and pageantry.

Trooping the Colour is a ceremony performed by regiments of the British Army, a tradition of British infantry regiments since the 17th century, and has marked the official birthday of the British sovereign since 1748. 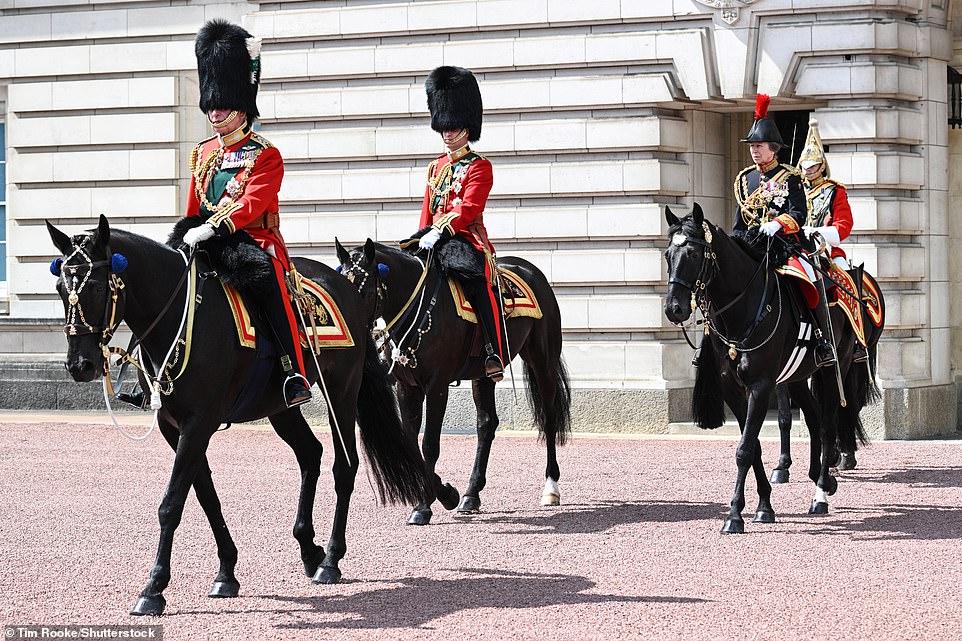 Prince Charles, Prince William and Princess Anne on horseback for Trooping The Colour in London this morning

Charles, the Duchess of Cornwall, William and the Duchess of Cambridge, the Earl and Countess of Wessex, Anne, the Duke and Duchess of Gloucester, the Duke of Kent, Princess Alexandra and Vice Admiral Sir Tim Laurence will be on the balcony for the flypast which is due to take place at about 1pm.

The Queen limited the numbers to working royals, meaning the Duke of York and the Duke and Duchess of Sussex will not be there.

But her Cambridge great-grandchildren, Prince George, Princess Charlotte and Prince Louis, and her two youngest grandchildren, the Wessex’s children Lady Louise Windsor and James, Viscount Severn, will be present.

The flypast will take six minutes to fly over the crowds and is expected to include more than three times the number of aircraft which took part in the Queen’s last birthday parade flypast in central London in 2019. 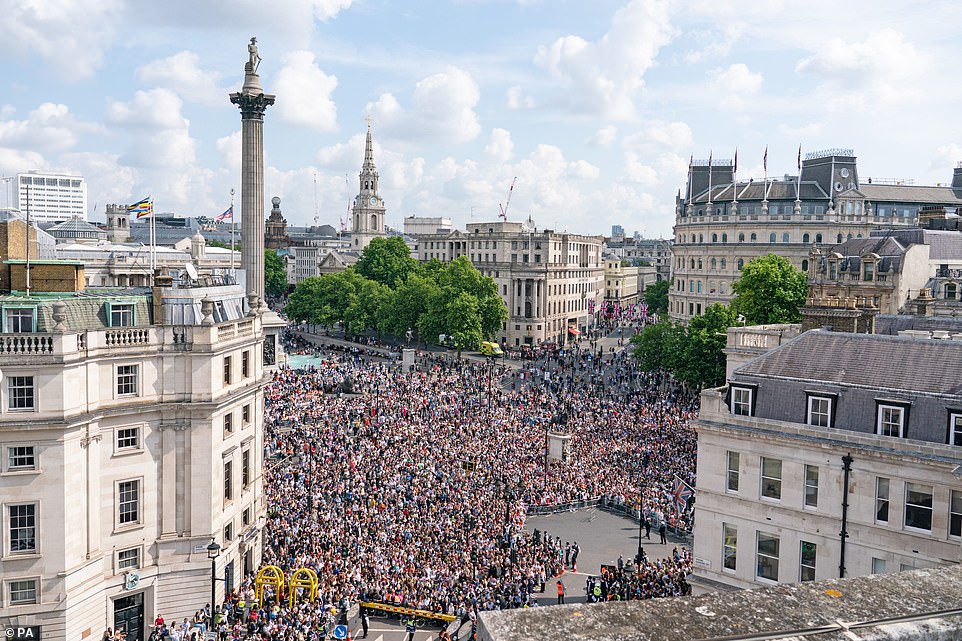 The display will include helicopters from the Royal Navy and the Army and RAF aircraft recently seen responding to events in Kabul and Ukraine and the coronavirus pandemic.

The flypast will also include highlights from the history of the RAF, with Puma and Chinook helicopters flying over the palace followed by the Lancaster, three Spitfires and two Hurricanes, all operated by the RAF’s Battle of Britain Memorial Flight.

This evening more than 3,000 beacons will be set ablaze across the UK and the Commonwealth in tribute to the Queen.

The network of flaming tributes will stretch throughout the country, with beacons at sites including the Tower of London, Windsor Great Park, Hillsborough Castle and the Queen’s estates of Sandringham and Balmoral, and on top of the UK’s four highest peaks. 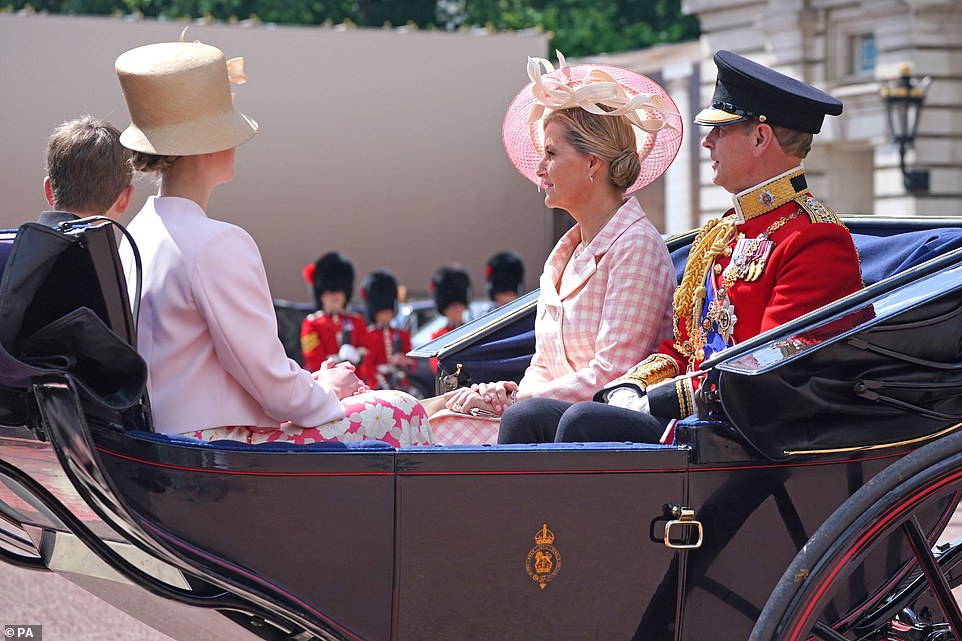 The Earl and Countess of Wessex with their children Lady Louise Windsor and James, Viscount Severn in London this morning

The first beacons will be lit in Tonga and Samoa in the South Pacific, and the final one in the central American country of Belize.

At 9.25pm, the royals will gather outside the Palace for the principal beacon – a 21-metre tall Tree of Trees sculpture for the Queen’s Green Canopy initiative – and it will be illuminated by a senior member of the royal family, and images will be projected on to the Palace.

The Duchess of Cornwall will be joining the Prince of Wales at Jubilee-themed tea parties this weekend, and they will attend a lunch at The Oval cricket ground in south London.

The couple will see a 6m (19ft 8in) felt piece of art featuring the Platinum Pudding, scotch eggs and fruit platters at The Oval.

It has been made by artist Lucy Sparrow, who recreated the Crown Jewels in felt to celebrate the Queen’s official 90th birthday, and will be displayed in the entrance to Buckingham Palace later this year.

More than 600 international Big Jubilee Lunches are being planned across the world – including in Canada, Brazil and New Zealand. 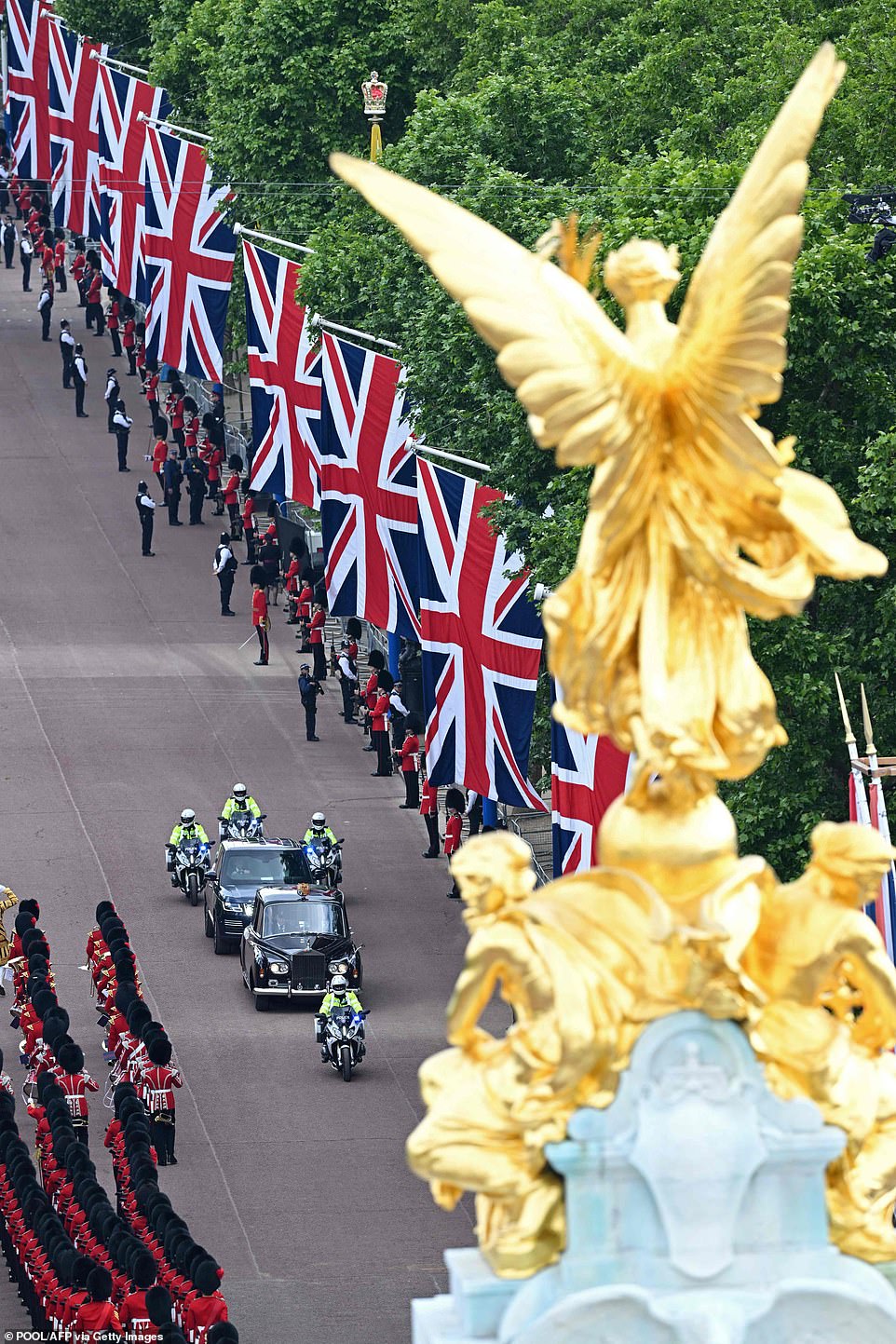 Prince Charles and Camilla are driven along the Mall towards Buckingham Palace this morning, ahead of the Trooping the Colour, for the start of the Platinum Jubilee celebrations

The Queen left Windsor Castle this morning as she headed to Buckingham Palace to take part in her Platinum Jubilee celebrations with other Royal Family members as tens of thousands of people packed London’s streets.

The Duchess of Cambridge and her three children Prince George, Princess Charlotte and Prince Louis waved for cheering crowds at Trooping the Colour today before the Queen’s arrival, as they began the celebrations in style.

Three carriages left the forecourt of Buckingham Palace carrying members of the Royal Family down The Mall this morning, with the Duchess of Cornwall riding alongside Kate Middleton and her children in the first carriage.

They were followed in the glorious sunshine by the Earl and Countess of Wessex with their son James, Viscount Severn, and finally the Duke and Duchess of Gloucester and Vice Admiral Sir Tim Laurence in the third carriage.

Louis sat between his older siblings George and Charlotte in a carriage, with Kate and Camilla sat opposite. The children, who were dressed in a light blue, navy and white colour scheme, waved to the crowds – and at one point Charlotte appeared to push Louis’s hand down, while the Princess squinted in the sunshine as the carriage left.

Prince Charles, Prince William and Princess Anne rode on horses during the traditional carriage procession which left Buckingham Palace ahead of Trooping the Colour, also known as the Birthday Parade, at the start of festivities.

As Kate, Camilla and the children left in their carriage, a riding groom had an issue with her horse which refused to move. The carriage had to swerve to avoid the animal which was eventually persuaded to join the procession.

The Cambridge children bowed their heads when the national anthem was played on their arrival into Horse Guards Parade. George was dressed in a navy suit, white shirt and blue tie for the occasion, while Louis was wearing a sailor-style white and navy top echoing an outfit worn by his father at the 1985 Trooping event.

Charlotte’s hair was down, dressed up with two fine plaits fastened with a blue ribbon, and she wore a cornflower dress. She peered out of the central window at Horse Guards Parade as Louis pointed out towards the ceremony. 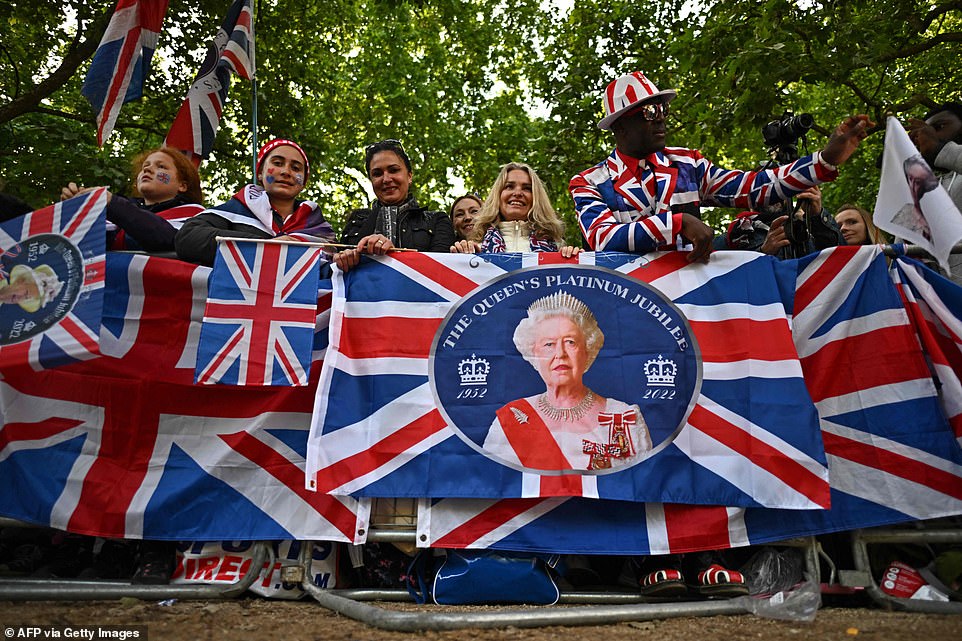 They arrived at Horse Guards Parade alongside their mother and grandmother in a carriage. The Duchess of Cambridge was wearing a white coat dress by Alexander McQueen and a hat by Philip Treacy. Riding horses were the Prince of Wales on George, the Duke of Cambridge on Derby and the Princess Royal on Sir John.

The Prince of Wales went ahead of the Duke of Cambridge and the Princess Royal as they rode diagonally across the forecourt and under the arches of Horse Guards. Charles wore his scarlet Colonel of the Welsh Guards uniform and green thistle sash riding a horse named George. William rode on Derby in his Irish Guards uniform and Anne on a horse named Sir John in her Colonel of the Blues and Royals uniform as part of the colourful parade.

It comes as Prince Harry and Meghan are set to join senior royals at an official engagement for the first time in more than two years. The Sussexes are also set to bring along three-year-old Archie and Lilibet, nearly one, for the public family reunion – and the children are likely to meet their cousins George, Charlotte and Louis at last.

Lilibet has never been introduced to her royal relatives, while Archie has not been in the UK since he was six months old. But there is no invitation for shamed Prince Andrew even in a private capacity after his fall from grace.

The Queen’s Birthday Parade at Horse Guards in London is the first official Platinum Jubilee event of the bank holiday weekend, with Her Majesty set to appear on the Buckingham Palace balcony for the RAF flypast at 1pm.

Thousands of people draped in Union Jack flags, party hats and plastic tiaras lined The Mall in the warm sunshine today. Some of those at the front brought camping chairs, having arrived over the past few days to get the best spot, and spirits were high as members of the public chatted and joked with police maintaining the perimeter.

However, police then swooped on four intruders tried to smash through security on The Mall. Two of the protesters – who were from Animal Rebellion – were able to sit in the middle of the road as the marching band approached. Officers hauled them out of the way as the musicians walked by them, avoiding them completely. 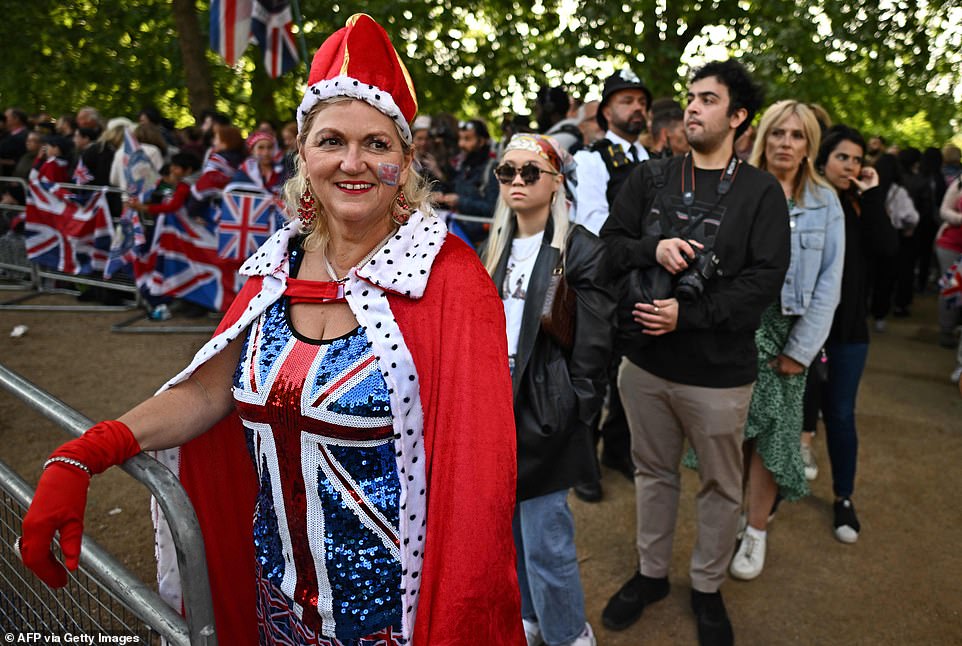 Royal fans line the Mall early this morning as they wait for the Trooping the Colour, as part of Queen’s platinum jubilee celebrations

The Irish Guards were among the first to arrive at a march at Horse Guards Parade this morning in front of the sitting crowds in the bright sunshine, led by their mascot, an Irish Wolfhound called Seamus. And as huge crowds descended on the capital to witness the historic weekend, police and park authorities said the areas were full.

The Metropolitan Police said: ‘The viewing areas in central London for the Queen’s Platinum Jubilee celebrations are now full. To avoid the disappointment of not being able to enter the viewing areas please avoid the area.’

Meanwhile the Duke and Duchess of Cambridge said in a tweet on their official account this morning: ‘We’re looking forward to celebrating and seeing how you’re joining us in marking this #PlatinumJubilee weekend.’

For the 2012 Diamond Jubilee Camilla was outfitted by Philip Treacy. Camilla wore a cream dress and coat by Anna Valentine and a straw topper by Treacy. She wore the exact same combination for her own wedding to Prince Charles and for William and Kate’s wedding too.

Prince Charles and Camilla, alongside other senior members of the royal family, have been on numerous tours during the countdown to this Platinum Jubilee celebration weekend, visiting Ireland and Canada just recently.