Throw your old ideas of portraiture out the window. That’s the message from the artwork that will welcome visitors to a new exhibition at NGV Australia opening in March. 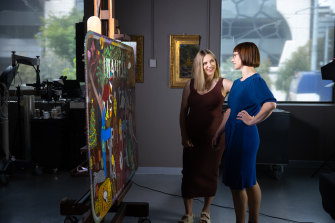 They’re surrounded by native plants and wildlife; they’re collecting bush tucker, cultivating a native tobacco plant. And it’s all painted over an old tourism road sign, the brown background on a headlight-catching reflective layer that sparkles back at the viewer.

There are layers here: worlds meet, Western superheroes embody an ancient Indigenous story about stars that came down to Earth, Country is literally signposted.

And yet, it’s a portrait. A portrait isn’t about capturing a mere likeness. It can be the place where art meets identity.

“This exhibition is trying to expand people’s perceptions and understandings and expectations of portraiture,” says NGV curator Beckett Rozentals. 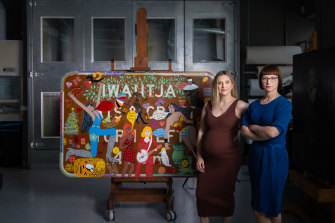 Adds her colleague, assistant curator Sophie Gerhard: “We’re really trying to branch out from what people would expect to see in exhibitions like the Archibalds, for example.”

That’s why they chose the work by Whiskey (“she really is a bit of a superstar,” says Gerhard), a recent acquisition by the NGV, to have its first outing at the entrance to Who Are You: Australian Portraiture, a co-production with the National Portrait Gallery in Canberra.

Teams of curators from both institutions pored over each other’s collections, putting together what they hope will be a comprehensive exploration of portraiture in this country, showing how it shapes and reflects our national identity.

Curators discovered a difference between the two galleries, Gerhard says: the NGV buys works based on the significance of the artist, while the NPG has the importance of the sitter in mind: “that’s a broad generalisation, but it really is the crux of it, and we would chat about the works in our collections and how we could meet in the middle, and challenge both of our ways of doing things”.

“Portraiture is one of the oldest genres of art, and it really was trying to emulate a likeness, back in the day. Throughout the show we’ve tried to mostly step away from the idea of likeness towards the broadened notion of identity, and how identity is captured in a work.”

There will be plenty of recognisable faces, but there will also be a Maree Clarke possum skin cloak that wraps a figure rather than represents it, and which talks about her ancestors: in a way, it’s autobiographical. There will be mourning jewellery from the 19th century when people would put hair from their departed loved ones in a brooch, or necklace, or ring.

One section of the show is dedicated to self-portraits: it explores that delicate dance of art versus ego when artists represent themselves.

“They’re very often highly staged,” says Rozentals. One of her favourites is by artist Napier Waller, who lost his right arm on the Western Front in 1917, taught himself to paint with his left hand, and in 1925 created a debonair self-portrait of himself for a State Library mural with both arms proudly present.

“That’s a nice part of the exhibition, looking at how we as viewers look at those depictions and challenge what’s being told to us.”

Other highlights include Boris Cipusev’s typographic portrait of Jeff from The Wiggles, and an abstract self-portrait by John Nixon.

Karen Quinlan, director of the National Portrait Gallery, said they had been thrilled to work with the NGV.

“The exhibition comes at a time when, in the current global COVID environment, stories from home, about home, and the artists and identities who have shaped and continue to shape our nation are more compelling and important than ever.”

Who Are You: Australian Portraiture runs March 25 to August 21 at NGV Australia next year, and in Canberra from October 1.