All week, to dodge the Apocalypse’s three horses – Pandemic, Floods and Ukraine – I turned to three champions of Australian language: Les Murray, Judith Wright and Don Watson. Thoroughbreds all, the first two fallen, but their words still pulse on the page.

Five years back, I visited Les Murray on Bunyah, his farm watermarking his poetry. Walking the paddocks, I felt to be inside the man’s barbed-wire stanzas, from the mayonnaise trunks to the “musket-hammer necks” of cormorants.

Les died two years later, his farm off-limits to wayfarers beyond its mid-coast LGA. Valerie, his gracious wife, his sounding-board and amanuensis, was likewise exiled, moved to a nursing home, abandoning the sanctuary for good: the books and goshawk feathers, the Solidarnosk medal, leaning on the weatherboard. 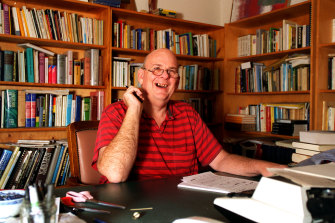 New poems too, allegedly. A boxful stowed in the scriptorium. When Jamie Grant, a long-time friend, and wife Margaret Connolly, Murray’s agent, finally made the trip, inland from Forster, they weren’t convinced.

But then, as Grant recalls, “In the centre of the desk lay a black spring-backed folder…and about three-quarters of a book of poems, all typed out by Valerie.” Indeed, the discovery fed the final collection, Continuous Creation (Black Inc, 2022). One poem, On Bushfire Warning Day, captures the curse of displacement: “If we stayed gone/we’d be pestilent lore./present in our past/ crowding the new people.”

Judith Wright, another giant of letters, knew displacement well. Within and beyond her verse, Wright advocated for indigenous rights and Mother Earth. For language too. In a new compendium, Judith Wright Selected Writings (edited by Georgina Arnott, Black Inc, 2022), the poet laments “the ageing process” of abstract nouns.

“Words and phrases that were once luminous discoveries, tremendous additions to human experience, have faded into cliches under the stress of constant use…” Liberty is one, lists Wright, along with art and truth. Repeated at length, the ideals lapse into “meaningless jargon” – another kind of displacement.

Don Watson, for his part, traces the scourge to a fear of verbs, a hallmark of cant. “Verbs are the key,” he writes in Watsonia – A Writing Life (Black Inc, 2020). “I want a National Verb Retrieval Day. I want a moratorium on ‘enhance’, ‘commitment’, ‘in terms of’ and ‘impacted’.”

Terrified of action in general, politicians are haunted by verbs in particular. Listen next time a minister takes the stump, promoting a multi-parameter approach of resource allocation, no clear verb in sight. Like a wedding minus a vow, as vows embody verbs, and verbs equate to fulfilment, or not.

Watson quotes Toni Morrison, the Nobel novelist the opposite of her namesake PM: “Official language…is a suit of armour polished to shocking glitter, a husk from which the knight departed long ago.” There it is again: displacement. The farm lights are on, but nobody’s home.

Even a single noun can be so hollow. For Watson, that noun is icon. In ancient times, the word denoted representation, deriving from Greek’s eikon – or likeness. An emblem to substitute for the real, yet lately, we attach the label to the doer in question, the protagonist, as if the hero only exists as a notion, a projection.

I’m reminded of Ukraine’s president, Volodymyr Zelensky, who urged his lawmakers “The President is not an icon, an idol or a portrait. Hang your kids’ photos instead, and look at them each time you are making a decision.” Hang. Make. Is. Verbs all three. Plus a healthy contempt for icon, the empty noun. Clearly, not just the writers can summon active language in the spectre of displacement.