Scott Morrison was confident from the moment he ascended to the leadership that he could make Bill Shorten his John Hewson. Morrison figured he could reprise Paul Keating’s success in 1993, despite the upheaval in the wake of the coup against Malcolm Turnbull, by focusing on Shorten’s personal and policy shortcomings.

And so it came to pass. Thinking about this after the most shocking few weeks for Morrison, one former Liberal cabinet minister mused that if the 2019 election was Morrison’s 1993, then 2022 could well be his 1996, where a long-term, decaying, fraying government with a domineering leader was beaten by a bespectacled man with thinning hair and a nondescript personality who curled up into a small ball then rolled himself to the centre. 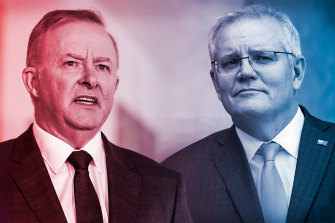 Will 2022 be the government’s 1996, where a fraying encumbent is beaten by a nondescript personality?

It is possible but by no means certain. There are so many known unknowns, including where, when or who COVID will strike, and now more than ever what the impact will be of the votes of the disaffected from the Coalition’s left and right to independents, Clive Palmer and Pauline Hanson.

Highlighting the realignment, Labor’s internal polling shows Victoria – thanks to longer lockdowns and vaccine mandates – is today Palmer’s strongest state and also Labor’s strongest state on a two party preferred basis. He has ripped away votes from everyone, but more from the Coalition than Labor.

Labor has suffered electorally from its base shifting left to the Greens or right to become Howard’s battlers or Morrison’s quiet Australians. Previously the Coalition profited by tacking further right, picking up One Nation or Palmer preferences. Now, the further right the Liberals go, the greater the erosion of support in once blue ribbon inner urban seats. 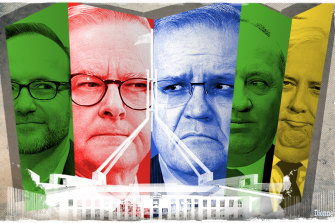 The impact of votes of the disaffected from the Coalition’s left and right is yet to be seen.Credit:Dionne Gain

The Liberals could lose some of their best and brightest male MPs, if not at the next election then probably the one after, to female candidates who, once upon a time, they would have killed to recruit and now deride as stooges.

Morrison’s task will be infinitely more complicated in 2022 than it was in 2019. His record is mixed at best, and he needs an agenda or narrative which appeases or appeals to widely disparate groups. He had hoped inner urban Liberals would be mollified by the net zero emissions target by 2050 and receptive to his painting of independents as Labor/Green stooges.

“You might as well vote Labor,” he told them on Wednesday. That strategy hasn’t worked so far with signs the disaffection is running deep and very personal.

In Wentworth, where Allegra Spender is challenging Dave Sharma, polling conducted by the Climate 200 group in early December showed climate was the top issue, economic management second and integrity in government third. It also revealed Morrison’s emergence as a serious electoral liability, with 56.8 per cent of voters dissatisfied with his performance and 37.6 per cent satisfied, leaving a net satisfaction rating of minus 19.2. With a margin of error of plus or minus five per cent, that’s a big number. 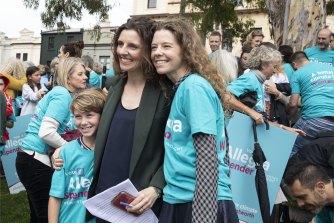 Allegra Spender with her sister, Bianca, at her campaign launch.Credit:Jessica Hromas

No wonder Morrison has shifted his attention back to the Palmerites and Hansonites, empathising with them, echoing their anti-government sentiments while glossing over obvious contradictions.

He trumpets spending an additional $33 billion in health, saying: “We’ve prevented the deaths in this country of around 40,000 Australians”. Then warns about “busy-body interventions” by a Labor government.

It is a tricky exercise for Morrison in the middle of a pandemic to boast about his measures (interventions) minimising deaths and business failures, to carry around a trillion dollar debt, then to cast himself as a champion of small government.

Morrison, with his own research showing he has to increase his primary vote, has been doing his best to frame Albanese as weak, inexperienced and risky, pointing out he has never delivered a budget, never sat on cabinet’s national security committee, that even after all these years few people know who he is or what he stands for and if he won he would be held hostage by the Greens. That’s a work in progress.

Another unknown which could work to his advantage is how Albanese copes during the campaign. He might revel in the high-pressure environment, get pumped up by the adrenalin and breeze through. Or he could freeze or snap under the strain.

Albanese paints Morrison as a flawed leader who can’t be relied on in a crisis, can’t be trusted to tell the truth, bungled the vaccine rollout, failed to establish dedicated quarantine centres and is held hostage by the wildly unpopular Barnaby Joyce, who might be more helpful to the Coalition if he stayed in Washington to lobby the US to lay off Julian Assange. Only half-joking here.

No surprise it features Morrison’s immortal quote from 2GB, on 20 December 2018: “I don’t hold a hose mate.”

It’s a reminder of the importance of the ground battle in individual seats. The Coalition’s campaign, involving around 120 people including guru Isaac Levido, a key player in the 2019 victory and an even bigger player later that year in Boris Johnson’s win in the UK, will be driven out of Brisbane by Federal Director Andrew Hirst.

Labor will headquarter in Surry Hills in Sydney, with Paul Erickson running his first national election.

Despite Morrison’s problems, there is no confidence in Labor that victory is assured and zero expectation that if they do win it would be as handsome as John Howard’s 45-seat majority in 1996. It is shaping as a narrow win at best, given the number of seats held by the Coalition on high margins which would require massive swings to fall.

As one Labor MP put it, if Labor wins “it will be a squeaker”.

The Opinion newsletter is a weekly wrap of views that will challenge, champion and inform. Sign up here.