A disabled man in an interable couple has joked about the proportion of his private parts while opening up about intimacy with his loving abled-bodied girlfriend.

Shane Burcaw, 27, from Pennsylvania, was born with Spinal Muscular Atrophy, a neuromuscular disease that causes muscles to deteriorate over time. He has been in an electric wheelchair since he was two years old and can barely move his legs, arms, and hands.

Him and his fiancée Hannah Aylward, 23, answered fans’ questions about how they manage intimacy in their interabled relationship in their latest video shared on their popular ‘Squirmy and Grubs’ YouTube channel.

In the Q&A, Shane quipped his private parts were not proportionate to his small body, and made his beloved burst with laughed as he assured viewers ‘everything down there’ works ‘wonderfully.’ 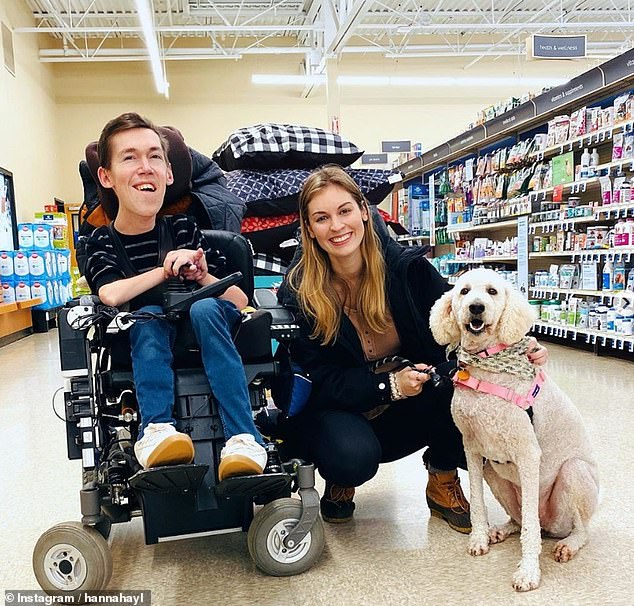 Shane Burcaw, 27, from Pennsylvania, who was born with Spinal Muscular Atrophy, a genetic condition which weakens motor muscles, discussed his ‘manhood’ during a Q&A with his able-bodies girlfriend Hannah Aylward

The couple’s relationship started when Hannah reached out to the writer and public speaker after watching a documentary that ‘The Office’ actor Rainn Wilson produced about his life.

In the email, she complimented Shane on his sense of humor and his writing before admitting that she thought he was very cute. They got to know each other through FaceTime calls and text messages and eventually fell in love.

Shane and Hannah launched their YouTube channel to better educate people about interabled relationships. They filmed their latest video specifically to address the many questions they get about the sexual aspects of their relationship.

When one of their followers asked whether his ‘private parts’ were normal and could function, the couple made sure to clear any doubt about Shane’s performance. 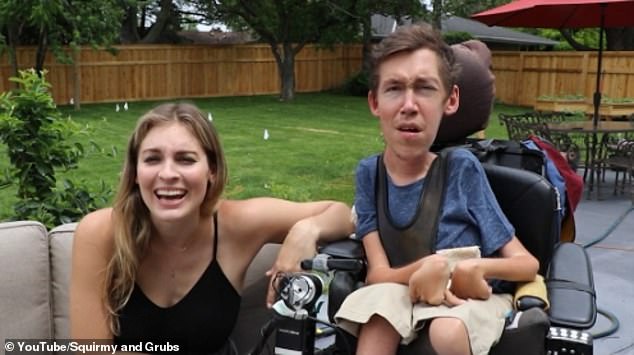 In their latest video in a series about intimacy in their relationship, Shane joked everything ‘works, feels and is wonderful,’ as Hannah laughed

‘Yes to both of those questions,’ Hannah replied.

‘A lot of people think that because you have a muscle wasting disease, that it’s different, but it is not,’ she added.

Shane was quick to joke about the subject, stating his manhood was more than adequate.

‘I don’t know how to phrase this,’ he said, ‘but my head is not proportional to the size of my body and one other part of me is not quite proportional.

What is Spinal Muscular Atrophy?

Spinal muscular atrophy (SMA) is a genetic condition that makes the muscles weaker and causes problems with movement.

It’s a serious condition that gets worse over time, but there are treatments to help manage the symptoms.

Floppy or weak arms and legs movement problems – such as difficulty sitting up, crawling or walking twitching or shaking muscles (tremors). B

Bone and joint problems – such as an unusually curved spine (scoliosis)

SMA does not affect intelligence or cause.

It’s not currently possible to cure SMA, but research is ongoing to find possible new treatments.

Hannah scoffed and laughed as he added:  ‘I’ll let you assume what it is, it’s not my toes.’

He went on to say he made it clear to Hannah when they started dating that she had nothing to ‘worry’ about.

‘I told you: Everything down there works and looks and is wonderful,’ he quipped.

Hannah was quick to reply he had in fact not used the word ‘wonderful,’ before admitting he had used ‘fantastic’ instead. 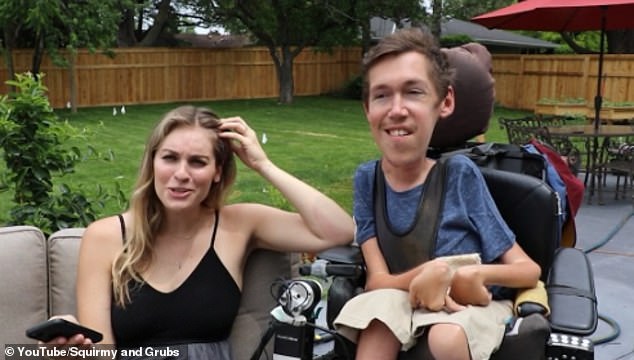 Hannah said she could confirm everything ‘worked,’ before Shane added that one particular part of his body was not proportionate to his frame

The couple have decided to share information about their sex life to educate other on what physical love was like for interable couples.

When launching the series of videos, they gave a swift disclaimer to their family and friends ‘not to watch’ or not to discuss its contents with them.

The couple have dedicated two videos to discussing their ‘intimacy’ to open people’s eyes to the reality of sex and disability.

Shane explained that while they have made it a point to keep their private life private, there is a lot of misinformation and stigma surrounding disability and intimacy that they wanted to dispel. 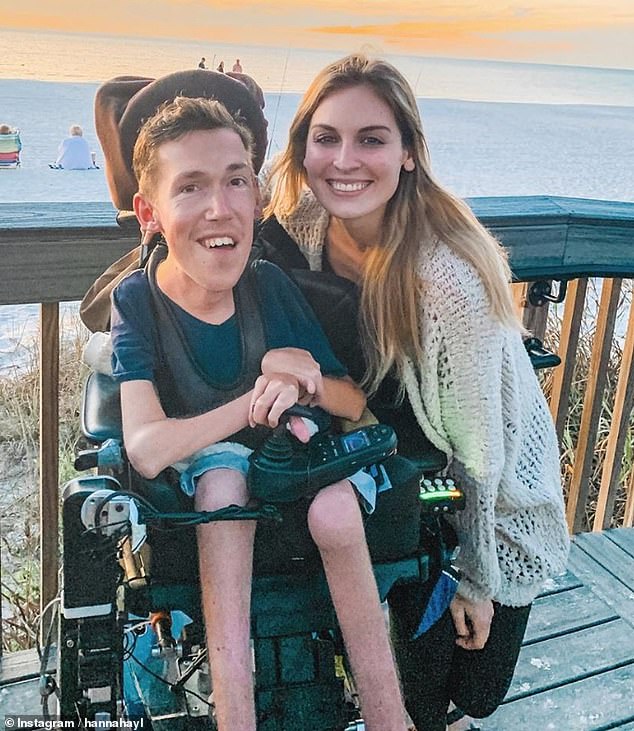 The couple met three years ago over email and are now happily engaged. They wanted to shed light on their relationship by creating their Youtube channel Squirmy and Grub

In the first part of the series, they used the word ‘intimacy’ as an umbrella term to ‘refer to any number of sexual acts’ to keep from divulging too much.

‘When we say intimacy, we mean sex. We mean other sexual acts,’ Shane noted.

The couple has previously spoken about their desire to have children together, with Shane explaining in an old post on his blog that he is ‘perfectly capable of having sex.’

‘A lot of people assume it doesn’t exist,’ Hannah said of the physical side of their relationship. ‘That’s a really damaging stereotype for all disabled people when you assume that disabled people aren’t sexually active.’ 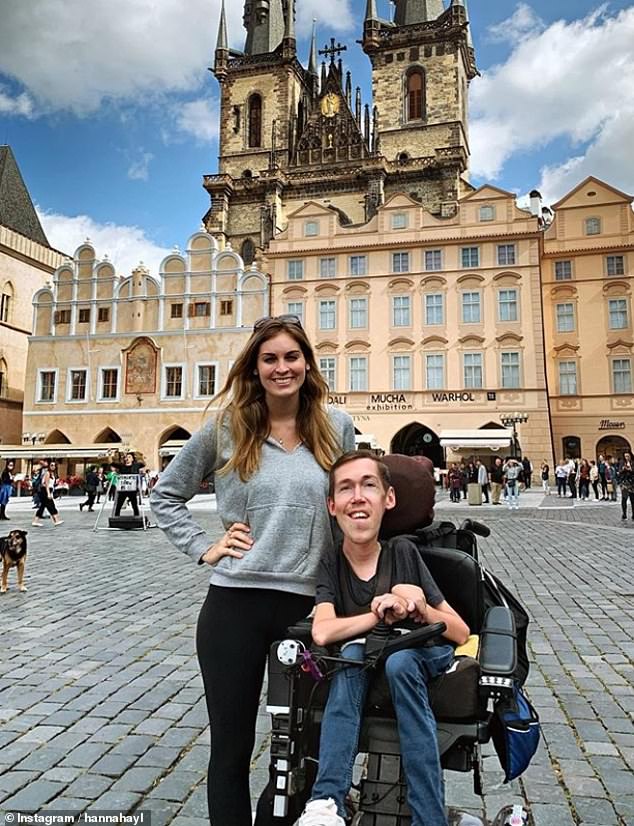 Hannah, pictured in Prague with Shane, said she wanted to bust the myth that disabled people and able people could not share fulfilling sex lives

The senior at Carleton College in Northfield, Minnesota, never mentioned Shane’s disability when she first emailed him three years ago while he was living in Pennsylvania.

In the email, she complimented Shane, who writes books and attends talks about his disability, on his sense of humor and his writing before admitting she thought he was very cute.

‘I knew right away that I needed to know this person,’ Shane said.

‘I’ll never forget the way my heart felt so light and beat so rapidly as I willed my atrophied fingers to type out a response as quickly as they could manage.’ 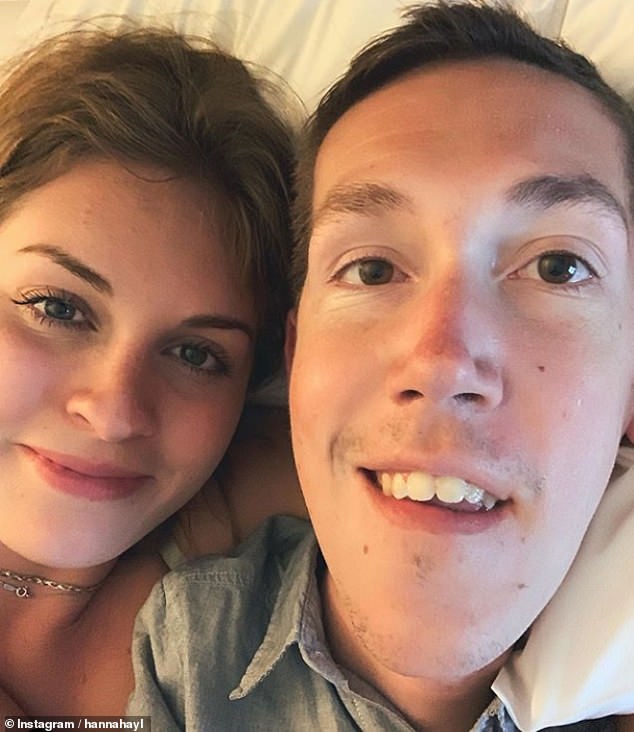 The relationship blossomed to include long FaceTime calls and text messages until both realized they were very much in love with each other.

Hannah visited Shane first in Pennsylvania where they spent four days getting to know one another. Both then realized they wanted to make a long distance relationship work.

In 2018, the couple moved in together in an apartment in Minneapolis, Minnesota, so Hannah could finish up her final years at her university.