Casinos are everywhere in the movies, from James Bond’s white-tie visits to the high-roller rooms in Monaco down to the endless popcorn movies in which characters gravitate to Las Vegas.

“There’s a lot of false glamour,” says director Paul Schrader. “People go to casino movies for the same reason they go to casinos: they think it’s going to be exciting. But you know, it really isn’t. All those commercials for casinos showing people laughing and drinking: I don’t know when you were last in one, but I didn’t see anyone laughing.” 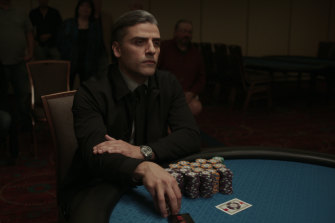 The casino poker rooms and the prison look pretty much the same in The Card Counter.Credit:Focus

Schrader’s latest film, The Card Counter, stars Oscar Isaac as a professional poker player who travels constantly, playing in the kinds of casinos and competitions where the stakes are worth winning, but not so enormous as to attract unwanted attention. Will Tell – not exactly his real name – spent 10 years in jail. With time on his hands, he learned to count cards. Now he plays seven days a week. It’s striking that, once you get past the blinking slot machines, the casino poker rooms and the prison look pretty much the same.

Jobs have always interested Schrader, especially the kinds of jobs that belong to some kind of nether world. The film that put him on the map was Taxi Driver (1976), which Martin Scorsese directed from a script he had written – as therapy, he once said – in the early ’70s. “When I thought about driving taxis I saw this bleak existentialism,” he says. “I didn’t see this funny guy who cracked jokes from the front seat.

“And the same way with card players. I saw this non-life, this quasi-life and I wondered what kind of person plays cards 10, 12 hours a day?” Someone, he reasoned, who felt he didn’t deserve to live. “They don’t have the courage to die and they don’t have a reason to live, so they live in this shadow world.” In other words, someone living with guilt.

Sin, guilt and the hope of redemption are longstanding staples in Schrader’s work. He was raised in a Calvinist household so strict he wasn’t allowed to go to the cinema until he was 18, after which he made up for it, but without losing his sense of sin. “That Calvinist upbringing. You know, ‘our righteous acts are filthy rags in the sight of the Lord’,” he grunts. The quote, a bit muddled, is from Isaiah. “Once you’ve been raised to believe that, no matter how untrue it is and how far you go in the opposite direction, you never quite escape it.”

His last film, First Reformed (2017), directly confronted that ingrained sense of unworthiness; Ethan Hawke played a minister tortured by his own inadequacies. With The Card Counter, Schrader wanted to reflect on responsibility. “We live in a world where people don’t take responsibility. ‘I didn’t lie to you, I misspoke.’ ‘I didn’t touch you inappropriately, I made a bad choice.’ But I come from a background where you’re born guilty and keep getting guiltier. What could make someone from my background feel he could never be forgiven?”

He found that sin: Abu Ghraib. In Schrader’s story, William Tell was one of the people in the photographs leaked to the press. They were under orders; they were part of a regime, but they were the only ones charged and punished. Tell’s superior officer Gordo (Willem Dafoe), who once told him he had the right stuff to be a torturer, left the services to become a military “consultant”, meaning a mercenary. He grew rich. Tell spent 10 years in a cell.

Anyone who didn’t understand just how guilt has worked on Tell might think he would want revenge. Of course, he doesn’t; he knows that, in the end, he did those terrible things and believes he can never be punished enough. But then along comes young Cirk (Ty Sheridan), whose own father came out of Abu Ghraib and eventually killed himself. Cirk thinks Tell will help him find Gordo and kill him. He is full of youthful derring-do; Tell knows where that can lead. If he can divert Cirk before he takes justice into his own hands – if he can save him from himself – perhaps he, too, will be saved. So he takes him travelling around the casinos, creating oddest of odd couples.

Paul Schrader’s directing career has waxed – with Blue Collar, Cat People and American Gigolo in the late ’70s and early ’80s – waned and pleasingly waxed again with the success of First Reformed. His next film is Master Gardener, starring Joel Edgerton in service to Sigourney Weaver in what Schrader says will be the third film in a loose trilogy dealing with his core themes. It was supposed to be shot in Melbourne, using the Botanic Gardens as a location, but lockdown forced a relocation to Louisiana.

At 75, he has a full slate. “What I think happened was I got more freedom in a complicated set of circumstances, because the budgets kept dropping,” he says. “And I realised that at a certain level I could do what I wanted if I could get a sufficient number of actors together.” Because he never saw Saturday morning B-movies, he cut his cinematic teeth on European arthouse films by Godard, Truffaut, Bergman and Bresson. First Reformed was his version of Bresson. “I realised that if I could do it at a certain budget and get in some interesting people, I could assure the investors they would come out of it clean,” he says. “And then I had freedom.” Long may it last.

The Card Counter opens on December 2

TV, movies, Find out the next TV, streaming series and movies to add to your must-sees. Get The Watchlist delivered every Thursday.