From Demonised to Glorified: Dolce & Gabbana fell out with Elton John, insulted Selena Gomez and were accused of racism so what is it about their stunning designs that has made the stars so forgiving?

Their banishment to fashion Siberia could not have been more complete and final.

And it was superstar Elton John delivering the killer blow: ‘Your archaic thinking is out of step with the times, just like your fashions. I shall never wear Dolce & Gabbana ever again. #BoycottDolceGabbana,’ he wrote.

The reason for his outrage?

Elton has two children via a surrogate with his husband David Furnish, and in 2015 designer Domenico Dolce described children born through IVF as ‘synthetic’, adding that they ‘oppose gay adoption’ and that IVF pregnancies were ‘chemical offsprings and rented uterus’.

Madonna and Victoria Beckham were among other celebrities to condemn the comments.

Surely, it was all over for the fashion brand? It was impossible to think back then that just six, short years later, it would be as if those poisonous, destructive words had never been uttered.

From the acres of coverage given to Kitty Spencer’s Dolce & Gabbana wedding wardrobe, when she wore five of their gowns, to the Venetian fashion show extravaganza this week featuring an array of A-Listers including Jennifer Lopez and Helen Mirren, you could be forgiven for thinking there’s only one fashion house in business at the moment.

Certainly, D&G seem to be beating the opposition hands down when it comes to attracting star power to promote their brand, as well as creating that all important social media buzz — they have 26.5 million Instagram followers. 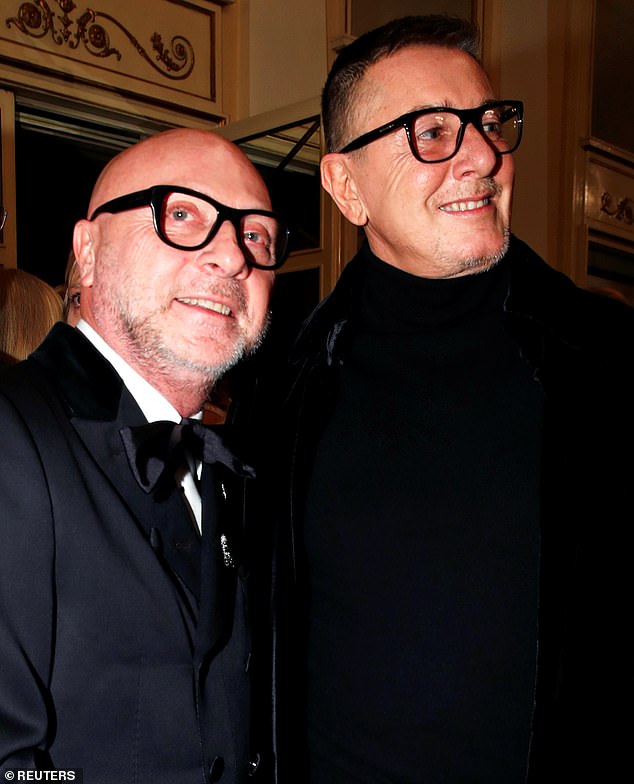 Certainly, D&G seem to be beating the opposition hands down when it comes to attracting star power to promote their brand. Pictured: Domenico Dolce and Stefano Gabbana in 2019

Which is staggering considering the ‘IVF’ slur was only one in a series of PR disasters that nowadays would see anyone banished from public acceptance for life.

In 2018, it really looked like they’d burned their bridges – again.

Their ironically titled D&G Loves China campaign backfired so spectacularly, perhaps the one consolation was that things couldn’t get worse.

The mis-step was the culmination of a string of PR disasters by the Italian fashion house created in 1985 by designers Domenico Dolce and Stefano Gabbana.

Their back catalogue of blunders had begun with an advert in which models attacked each other with knives and escalated to Dolce’s slur on IVF children and reached fever pitch when he called actress Selena Gomez ‘ugly’.

So who knows what they’d been hoping to achieve when they released a video with Chinese folk music playing in the background as Chinese model Zuo Ye tried to eat Italian food with chopsticks and a Mandarin-accented voice said: ‘Welcome to the first episode of “Eating with Chopsticks” by Dolce & Gabbana.’

Needless to say, it didn’t go down well.

Chinese celebrities called for a boycott of the brand, its products were pulled from some Chinese online stores and once-proud D&G clothes owners filmed themselves burning their outfits.

As the campaign video was swiftly deleted, it looked like the China ‘campaign’ would kill off the apparently floundering company for good, not least after subsequent racist remarks allegedly sent by Gabbana on Instagram went viral (he claims his account was hacked).

After all, who else was there left to offend? 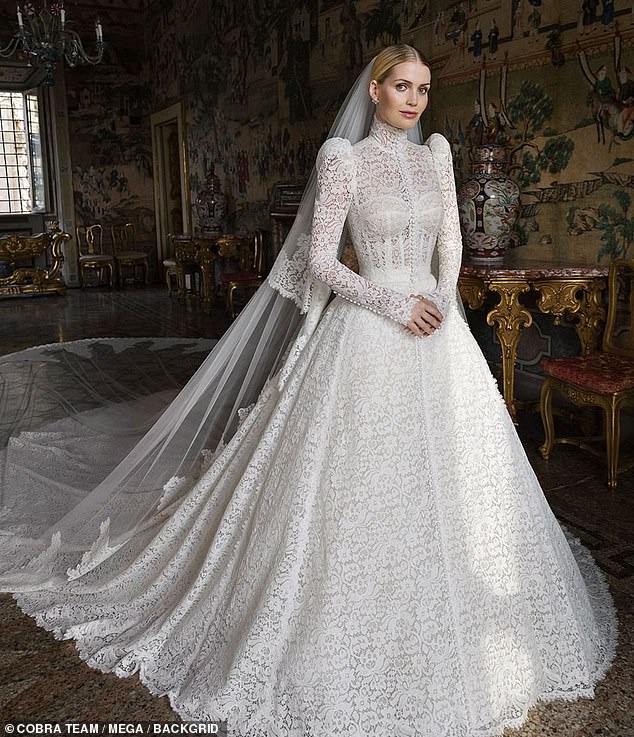 Not the Japanese, given Gabbana had already announced he wouldn’t want a Japanese designer, and certainly not social media, whose outrage the pair ruthlessly mocked after creating a £178 #BoycottDolce&Gabbana T-shirt.

Ironic given the size of their Insta following now.

By 2019 stars had largely stopped wearing their outfits on the red carpet. Stylists said they’d no longer be dressing clients in D&G clothes and at the Oscar ceremony that year D&G dresses were conspicuous only in their absence.

However, after a spell in sartorial Siberia, something curious happened to the duo — suddenly it’s OK to wear D&G again.

How did they manage such a masterstroke? The answer lies in a mixture of key business appointments and possibly a change of outlook after a quiet period of reflection over the pandemic.

And, of course, there’s the ever-present lure of being seen in a beautiful Dolce & Gabbana dress.

Actresses Blake Lively and Lupita Nyong’o have appeared in the label, and even the Duchess of Cambridge wore one of their dresses last year.

Further proof, if it were needed, that D&G is once again a firm favourite of the famous came at its lavish show for Alta Moda in Venice, at which stars including actress Jennifer Hudson and model Heidi Klum were happy to grace with their presence.

D&G has long been synonymous with celebrity bling, in the 1980s and 1990s the couple invented the corset dress and courted Madonna as a friend and muse.

By the Noughties, Dolce, 62, the son of a tailor, and Gabbana, 59, a former graphic designer, were dressing the likes of Kylie Minogue and Gisele.

In 2007 the Advertising Standards Authority banned a campaign showing male models waving knives and one man lying on the ground with a gunshot wound to the head, after 160 complaints.

In 2012, D&G was strongly criticised for the ‘offensive’ earrings with colonial-style imagery of black women it featured on models for a catwalk show.

After Elton John’s outrage, Dolce apologised, blaming his strict Catholic upbringing for his ‘inappropriate’ words, prompting Elton to accept the apology and announce he looked ‘forward to wearing their designs once again’.

Nonetheless, the label – 40 per cent is thought to be owned by Gabbana and the rest by Dolce and his family – blundered again by marketing £1,740 ‘slave sandals’ in 2016, causing an outcry.

With a once adoring A-List set anxious as to what the duo might do or say next, and a cancellation culture on the ascendence, by 2017 it was left to the likes of the deeply unfashionable Melania Trump to sing the label’s praises — she was seen wearing the label that year.

Then in 2018, in response to an Instagram post inviting people to rate various outfits worn by actress Selena Gomez, Gabbana wrote ‘è proprio brutta!!!’ — which translates to ‘she’s so ugly’.

Allegations of misogyny were added to the charge sheet, and by the time the brand deleted the #DGLovesChina campaign two months later, its subsequent apology to the Chinese did little to dent the damage.

Celebrity stylist Jason Bolden, meanwhile, had said: ‘Not since the beginning of time have you seen Dolce on my rack.’

Gabbana deleted his personal Instagram account and the pair stayed uncharacteristically silent for most of 2019 — perhaps plotting operation fight-back. 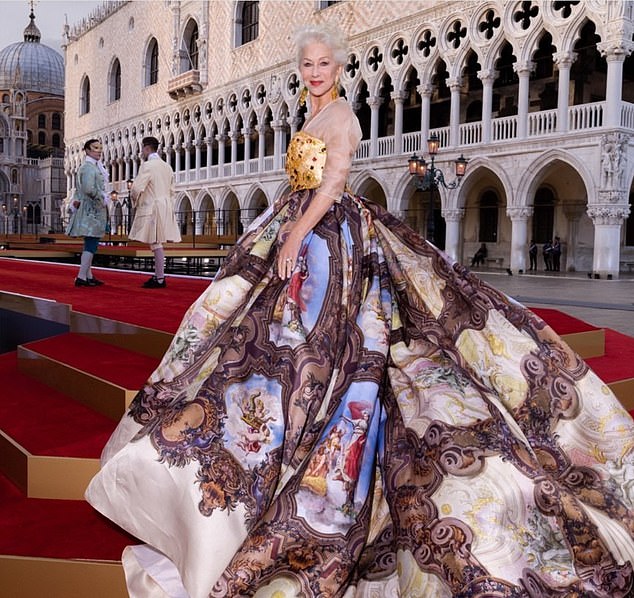 That October, businessman Carlo Gariglio was hired as the new Asia Pacific CEO, describing himself on LinkedIn as a ‘turnaround professional with measurable track record of success’, while in January 2020 Lucio Di Rosa was appointed ‘head of celebrity and VIP relations.’

Having served a similar function at Versace and Giorgio Armani, he came with impeccable connections to Hollywood’s A-List and none of the radioactive baggage of his bosses.

His popularity and Instagram account, filled with photos of stars such as Sharon Stone and Jennifer Hudson resplendent in D&G frocks, has done much to detoxify the brand.

The pandemic, too, appears to have helped refine its founders’ reputations. ‘We learned the importance of stopping and reflecting.

The importance of thinking about life’s most important things, the values that we always should keep in mind: family, care for loved ones, humanity and mutual support,’ they said.

They donated money to Italy’s Humanitas University to research Covid-19, describing their support as a ‘moral duty.’

After the murder of George Floyd, they donated to U.S. civil rights organisation The National Association for the Advancement of Colored People (NAACP).

They pledged support for The Trevor Project — an organisation for suicide prevention among the LGBT community, launched a campaign for gay fathers and, this Valentine’s Day, created another campaign to ‘celebrate love in all forms’.

Placing more emphasis on the artisans who make their designs – a recent issue of Elle magazine recounted how they had collaborated with 38 Florentine workshops, prompting praise from the city’s mayor – also helped to shift attention from their problematic personalities, while a newly created and immediately popular plus-size range increased sales.

Although D&G doesn’t disclose accounts, it is thought that while revenue from the Asia-Pacific market decreased, revenue in the U.S. increased. 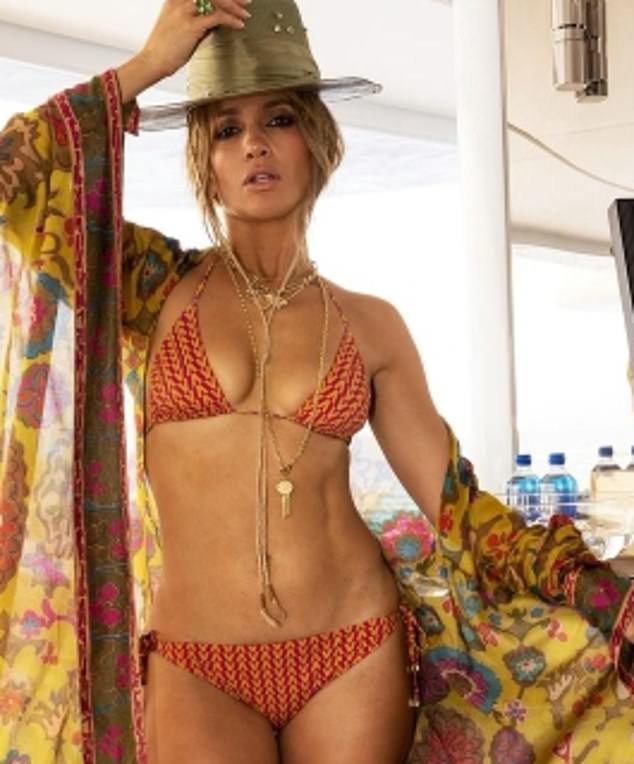 Celebrity stylist Thomas George Wulbern believes stars such as J.Lo (above) would have been paid to attend this week’s show in Venice 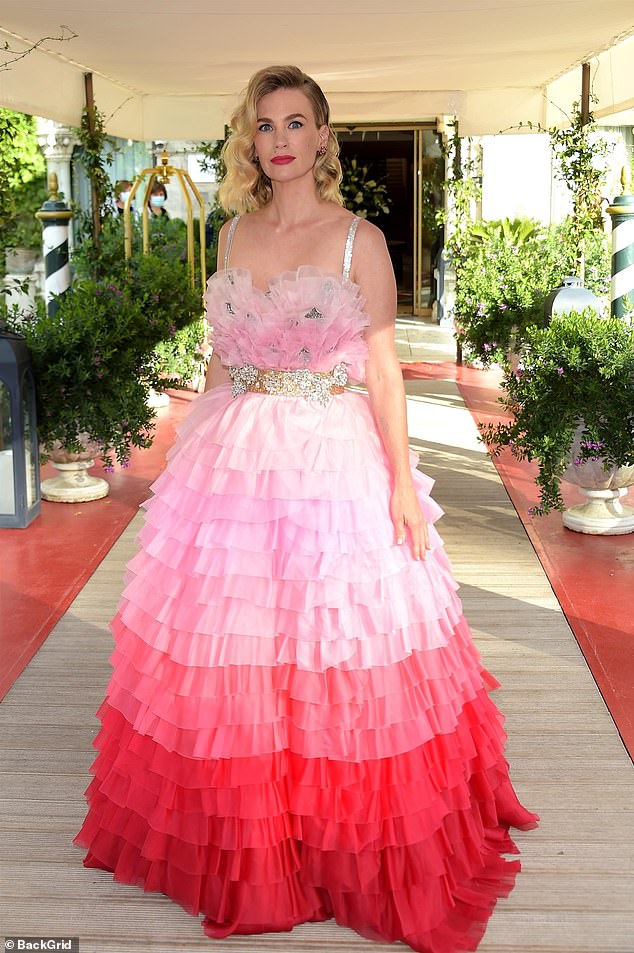 Slowly, more celebrities started to wear D&G, and by January 2020, a month in which singer Gwen Stefani wore D&G to the Grammys and the Duchess of Cambridge a tweed suit to the National Portrait Gallery — the label’s metamorphosis was in full swing. Above: January Jones

Slowly, more celebrities started to wear D&G, and by January 2020, a month in which singer Gwen Stefani wore D&G to the Grammys and the Duchess of Cambridge a tweed suit to the National Portrait Gallery — the label’s metamorphosis was in full swing.

D&G dressed Reese Witherspoon for an Oscar’s after party the following month and the brand is once again a feature on the Chinese red carpet.

So is it the image rebranding that has swayed celebrities? Or is something else at play?

Whether celebrities are paid by D&G — or, indeed, any other designer to wear a specific label — is unknown, although a source told website Fashionista that the brand doesn’t pay for red-carpet placement.

Celebrity stylist Thomas George Wulbern believes stars such as J.Lo would have been paid to attend this week’s show in Venice.

‘I can’t imagine why someone like J.Lo — heavily affiliated with brands like Versace — would be there otherwise,’ says Wulbern.

‘As well as flying in stars they’ve flown in stylists. The amount of money they’ve spent is wild.’

But while he concedes the spectacle of this week’s fashion show is ‘amazing’ he is sceptical it will increase sales. ‘You can’t forget all the issues that have happened in the past. I’m not sure if these grand shows will make people buy into the brand, but we’ll see.’

Whether D&G have truly learned from their mistakes, or have been reborn courtesy of a savvy PR team, is a matter of opinion. Only time will tell if they can steer clear of controversy long-term.

Also unclear is whether the celebrity world has truly forgiven and forgotten — or taken a calculated look at D&G’s £50,000 couture frocks and the lavish lifestyle they represent and turned a blind eye.

Decades of D&G gaffes and disasters they survived

Cancelled by Elton over IVF outrage

Elton John swore never to wear the brand again after Domenico Dolce sparked a furore in 2015 following an interview with an Italian magazine in which the designer said he disagreed with gay parenting.

‘We oppose gay adoptions — the only family is the traditional one,’ he said. 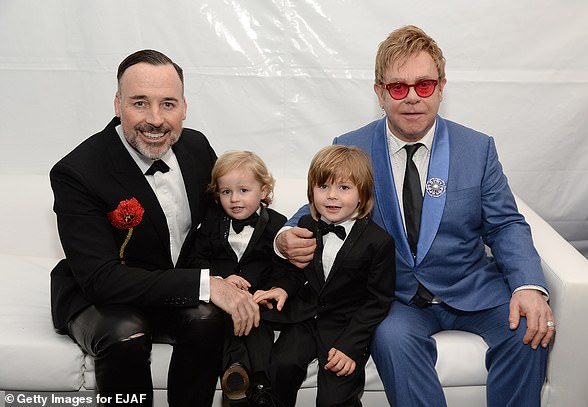 Racist slur that shocked the world

In a 2018 campaign, the company released video clips of a Chinese model being taught to eat spaghetti, pizza and cannoli with chopsticks, in a planned extravaganza in advance of a show in Shanghai.

It was branded racist and pandering to old stereotypes, and was quickly deleted. 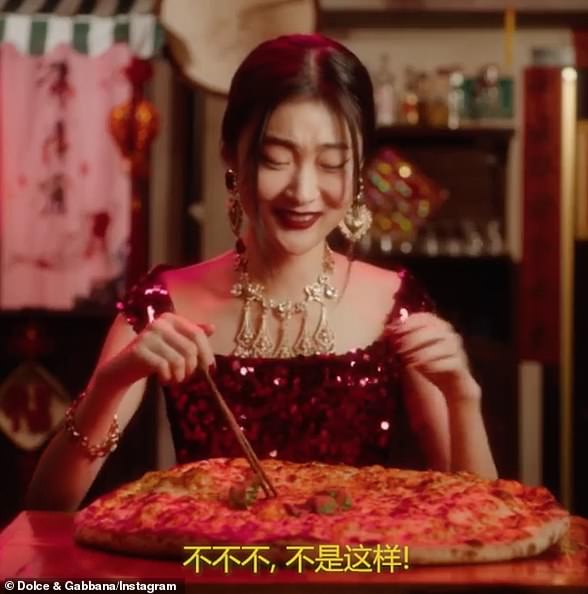 In response to an Instagram post inviting people to rate various outfits worn by actress Selena Gomez in 2018, Gabbana wrote ‘è proprio brutta!!!’ — which translates as ‘she’s so ugly’, and added allegations of misogyny to those of homophobia and racism. 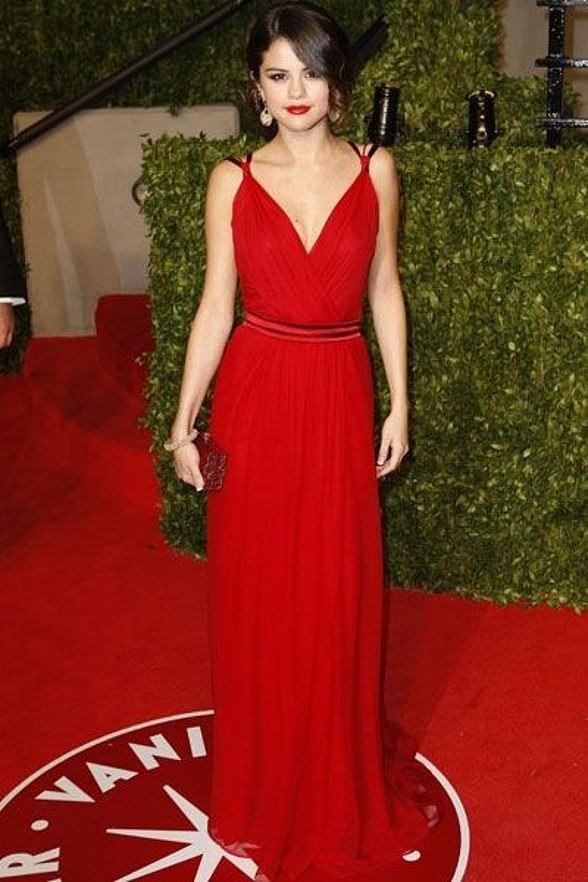