The Australian Border Force is approving travel requests at a much higher rate now than earlier in the pandemic and making decisions within hours that previously took weeks.

A third of Australians seeking permission to travel overseas have now been granted an exemption from the travel ban implemented to halt the spread of coronavirus, up from 25 per cent earlier in the pandemic.

Since March, Australian citizens and permanent residents have been banned from leaving the country without approval from the federal government on the basis that they could spread COVID-19 when they return. 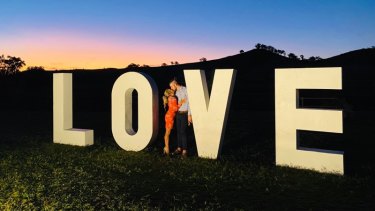 Brooke Carman received permission to travel to Germany to be with her partner Kevin Jaeger the same day she applied.

An ABF spokeswoman said the higher approval rate was the result of a new application portal and additional staff, which had helped clear a backlog of requests.

This is backed up by the fact that the rejection rate has also increased, indicating fewer people are left waiting for a decision or having to make multiple applications.

But Adam Byrnes, the principal lawyer at Visa & Citizenship Lawyers in Sydney, confirmed the decisions were much faster since the introduction of the application portal but believed there had been a "definite shift in policy" within the past week.

"We're seeing a lot more approvals come through with the criteria being a lot lower bar than it was before … such as relationships where they've only spent two weeks physically together," Mr Byrnes said.

"We've had 10 or 15 [approvals] come through in the past three or four days where they were nowhere close to meeting the requirements that we've had before."

Liberal MP Dave Sharma criticised the policy as a "pretty extraordinary restriction on people's liberty" in an interview with The Sun-Herald two weeks ago and was among Coalition MPs who spoke about it in the party room in Canberra last week.

The ABF approved 22,640 individuals to leave the country out of 91,950 requests overall, between March 25 to July 31. A request can cover more than one person.

By August 16 that climbed to approval for 34,379 Australians to travel overseas out of 104,785 requests. That means the approval rate rose from 25 per cent to 33 per cent as a result of 11,739 additional exemptions but only 12,835 additional requests.

Meanwhile, the ABF had also declined 7120 requests by the end of July, 7.7 per cent of applications received to that date. By August 16, it had declined 10,942 requests, a rejection rate of 10.4 per cent.

The ABF introduced the new application portal on July 17. The spokeswoman said it allowed users to register for an account and organise documents and correspondence in one place. The system provided immediate acknowledgement of the application, the linkage of group and family members and the ability for users to update the existing application and update supporting documents rather than making a new request.

Brooke Carman is excited to be going to Germany but daunted by the difficulty she would face in returning to Australia.

Brooke Carman, 35, from the Southern Highlands, said she applied last week to depart Australia to join her partner Kevin Jaeger in Germany and received approval the same day.

"At 8.30am I sent it off and I heard back by 4 o'clock,” she said. "My personal experience was I had all the right paperwork and it was processed very quickly."

Mr Jaeger was in Australia on a bridging visa when he had to fly back to Germany because his grandfather died. As a temporary visa holder, he would be unable to return without permission.

Ms Carman said she supported Australia's public health measures but it was daunting to be going overseas knowing if something happened to a loved one, she would be unable to return immediately because of flight cancellations and quarantine requirements. 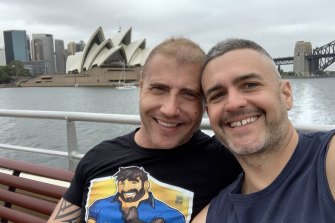 Shawn Rawleigh (left) finally has a travel exemption, allowing him to be reunited with his partner Ben Scrivener.

Last week US citizen Shawn Rawleigh finally received his travel exemption to move to Sydney to be with his partner Ben Scrivener, an Australian citizen. The response came within 24 hours.

Mr Rawleigh, who was originally due to move to Australia in March, said it was his eighth application and his third using the new portal.