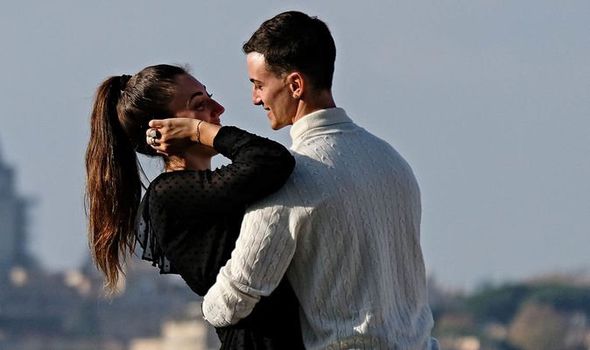 The most common causes of awkwardness were found to be nervousness (32 percent), lack of confidence (20 percent) and drinking too much (17 percent). Falling over, fluffing a joke, mistiming a hug or kiss and having food stuck in their teeth also made the list along with spilling a drink and bumping into an ex.

Others have been known to use an ex-lover’s name by accident, laugh at the wrong moment or sit in silence with nothing to say.

But the research, commissioned by Extra Chewing Gum, found 44 percent preferred to laugh off any embarrassing moments.

And while three quarters felt it wasn’t funny at the time, they admitted they can look back and have a laugh about it now.

Sasha Storey, the head of minty fresh breath at Extra Chewing Gum, said: “We know that everyone has had a tough year, whether that be a virtual dating disaster or tech faux pas.

“We now know dating disasters have happened to almost half of the nation… is it even a real date if we don’t have an interesting story to tell afterwards?”

The study also found a fifth of adults have left a date early because they felt so mortified over something that happened, while 13 percent cancelled the next meeting.

With face-to-face dating taking a backseat during the pandemic, more than a tenth of adults have experienced a humiliating moment on a virtual date.

This includes a housemate interrupting (21 percent), awkward silences (21 percent), a frozen screen (22 percent) and talking for a long time while on mute (19 percent).

As a result, more than one in 10 plan to get their “dating mojo” back in 2021 after it was so out of sync due to the pandemic, with a quarter admitting they have “let themselves go” over the last 12 months.

It also emerged that of those polled via OnePoll who are in a relationship, one in six have moved in together specifically as a result of lockdown.

For more than a third this has led to romance being lost, while 30 percent have experienced an embarrassing moment in front of their partner since moving in.

The research was carried out by Extra Chewing Gum as part of its mission to help the public get their “ding” back and identify areas people need a little help in their dating endeavours.

Sasha added: “The past year has been different for dating, speeding up lots of relationships and moving first dates to virtual settings.

“But all still allowing for awkward moments – spilling drinks swapped for screens freezing and outfit disasters being hidden by camera positioning.

5.     Spilling drink on your clothes