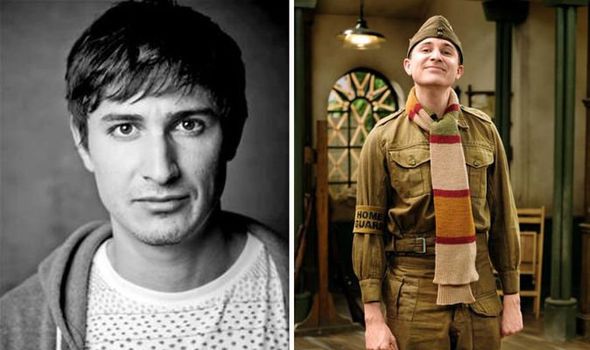 “I used to watch re-runs of Dad’s Army and if I did something stupid, my dad would call me ‘Stupid boy, Pike’. So the show was a big part of my upbringing in every way,” grins the 31-year-old actor, who wasn’t even alive when the original series aired. “The weird thing is – and this has never happened before or since – I received an email asking if I would like to play Pike. “I have never been offered a part without auditioning, and I immediately replied with a resounding ‘Yes.’ But as the filming dates got closer, I suddenly realised, ‘Bloody hell, I am actually going to have to do my best to recreate this much-loved character!’”

In the original Dad’s Army, Private Frank Pike – mummy’s boy, junior bank clerk and incompetent part-time soldier – was the part that gave a young Ian Lavender his big break, and the character played a key role in some of the show’s most iconic scenes, including the famous stand-off with a German officer demanding the platoon’s names, resulting in the classic order: “Don’t tell him, Pike!”

Tom says the scripts for the re-made Lost Episodes didn’t have many lines for Pike, but he got to claim his fair share of laughs in other ways.

“I didn’t have the most lines out of the cast but the pressure was on to perfect the different Pike faces, of which he has a lot of brilliant ones,” admits Tom.

“I also had the pleasure of watching some amazing actors giving Dad’s Army a new lease of life.” 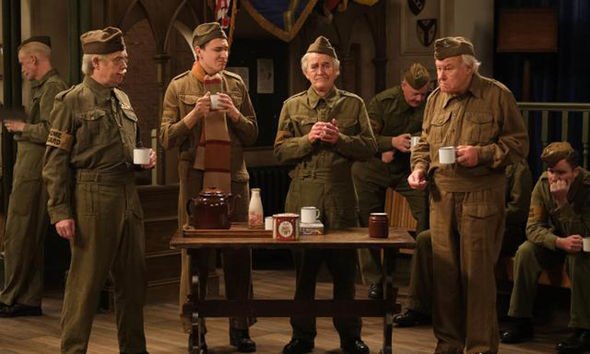 Nine series of the BBC sitcom ran between 1968 and 1977. The new cast has re-made three episodes that originally aired in 1969 but were lost when the BBC accidentally wiped the tapes.

One person who isn’t a fan of the remake is Stuart McGugan, who starred in It Ain’t Half Hot Mum as Gunner “Atlas” Mackintosh, and appeared in an episode of the original Dad’s Army.

In a recent interview, he slammed UKTV channel Gold’s decision to remake the three lost episodes, ­branding it “­cultural vandalism”.

Tom is keen to defend the new show.

“We are not remaking something that exists because they are three lost episodes,” he says. “All we have done is try to piece them together as accurately as possible
with modern actors.

“If we were trying to piece together a mosaic from Ancient Rome, is that ‘cultural vandalism’ just because you want to see what people saw 2,000 years ago? It’s a ­historical record. I think that guy just wanted publicity!”

Co-star David Hayman has revealed audiences invited to watch the recording had to be warned not to stand up and cheer at the famous line: “They don’t like it up’em!”

Tom reveals how the actors won over ­die-hard fans and that filming in a lovingly recreated St Aldhelm’s Church Hall at Pinewood studios proved a real hoot. He recalls: “Hard-core fans came to see the live recording and they were doing Dad’s Army quizzes in between us recording the scenes. Their knowledge was off the scale.

“It was super nice to win them over because Dad’s Army fans are the hardest people to convince.

“I’m sure some of them were desperate to hate it, which is completely understandable. But they really warmed to it. By the end, you saw these people who seemed so giddy at the fact that they had actually been able to see it live.”

While most of the original Dad’s Army cast are no longer alive, Ian Lavender is still around. The 73-year-old star went on to star in BBC soap EastEnders. 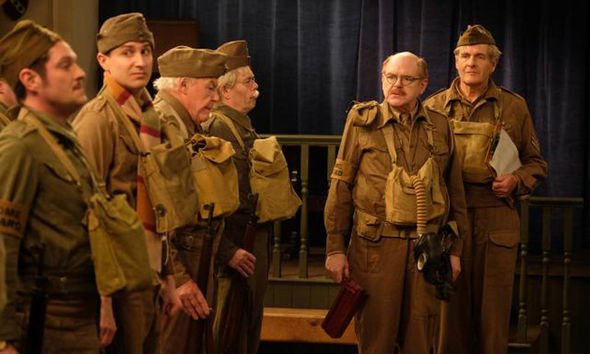 In the original series, Lavender’s Pike was naive and childish. Frequently found with confectionery, he was petulant to superiors which annoyed Captain Mainwaring – inspiring the phrase “stupid boy”. But did Tom feel a certain pressure to recreate the original Pike?

“Well, I think we all took the attitude that you can’t really do a faultless impression because it’s only ever going to be an inferior copy,” he admits.

“But all of the actors really studied the original performances because our job is to be understudies and essentially recreate the role.

“What we wanted to do is actually bring the heart and spirit of Dad’s Army to the screen and we were all cast because we have innate qualities of our individual characters.

“I suppose we were all thinking that we have to be different from the original performance otherwise.

“The point was to try to make these episodes as good as the original Dad’s Army’s episodes – which meant that we had to bring a bit of ourselves to it.”

Tom and Gavin & Stacey star Mathew Horne, 40, playing spivvy Private Walker in the remake, originally made famous by James Beck, were the only actors under 50 on set.

He says: “It was really a remarkable ­experience to work with this array of great actors and it’s not often that you are in such an ensemble piece.

“As soon as the audience came on, it just got better and it was like a masterclass ­seeing the different techniques of what these successful actors brought to a live record.
I definitely learned a lot.

“It was my first ever live record studio ­sitcom and I tried to take in as much as I could from actors who have been working for a lot of years.”

He adds: “Matt was probably the most professional. He listens not only to his notes for his character but also to everyone else’s.

“He was so on top of everything and I thought that was quite remarkable because I switched off sometimes and started looking at the ceiling. 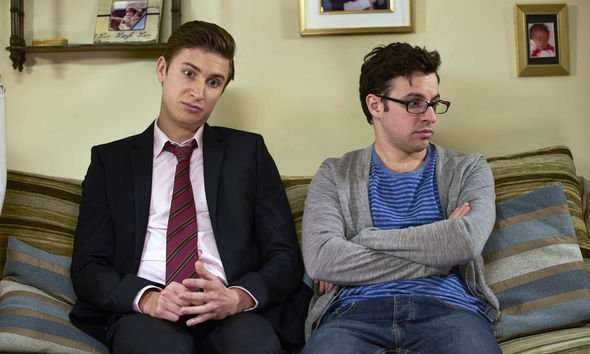 “Timothy West (the oldest cast member at 84) carries this playfulness and he is an old boy and his eyes are still so alive. He has a real magic behind them.”

After the show aired for the first time, its creators David Croft and Jimmy Perry confirmed what many fans suspected, that Sergeant Wilson (originally played by John Le Mesurier and portrayed by Cold Feet star Robert Bathurst in this remake) was Pike’s father.

Tom admits he was in awe of his on-screen dad. “Robert Bathurst would glide around the stage like a ghost and always seemed really relaxed, very centred and measured.

“He gave the recording this level of precision, whereas I often find myself getting quite nervous and that sometimes manifests itself in unwanted ticks and stuff.

“But Robert has this real calmness about him which I am going to try and take with me. Every time I perform, I get nervous and scared and I don’t think that necessarily helps.”

Currently performing his one-man show Manhood to rave reviews at the Edinburgh Fringe Festival, Tom has audiences in stitches about the thorny subject of circumcision! 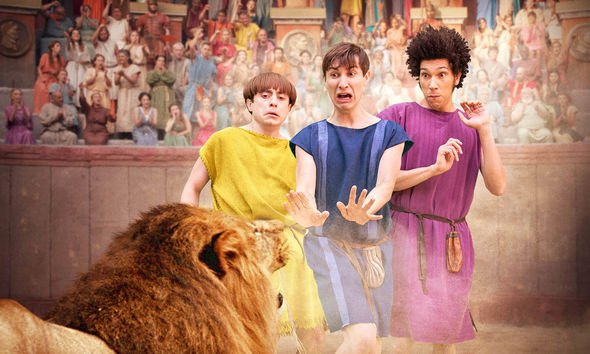 Fans can next see him in the new series of ITV2’s Plebs and later in the year he starts work on the sixth series of the hugely successful Friday Night Dinner with Tamsin Greig and Inbetweeners star Simon Bird.

The C4 sitcom focuses on the regular ­dinner experience of the British Jewish Goodman family every Friday night.

In real life, Tom was born in Hammersmith and raised in Berkshire. He is no relation to the late playwright Jack Rosenthal, though coincidentally, Jack was married to Maureen Lipman, Tom’s co-star in the new series of Plebs.

He laughs: “Maureen is back again for this series of Plebs and there is this whole running joke where people think I am her son.

“She is always forced to take credit for her actual child who is a talented playwright and sounds much cleverer than me.

“It’s only when people are very erudite that they think that Jack Rosenthal is my father. Generally if they are sports fans then they go for Jim, so you can always tell what kind of person they are.