Beverly Hills mother Christine Wong Wan Po tries to avoid looking at the ceiling of her four-bedroom home. Over the past three years, cracks in walls have spread through every room.

She worries that if she looks up, she will find more. 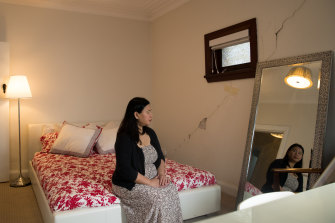 Beverly Hills resident Christine Wong Wan Po says the cracking throughout her house has had a ‘domino effect’ on her family’s life. Credit:Janie Barrett

She and her neighbours, who also have extensive cracking to their home, blame construction of the King Georges road interchange and the new M5, both part of the $16.8 billion WestConnex motorway project, for damage expected to run into the hundreds of thousands of dollars. They argue excavation disrupted the underground water table, causing their homes to lean and crack.

Ms Wong Wan Po said the growing damage to their home on Elouera Street South had a "domino effect" on her family. Her 15–year-old daughter was diagnosed with an auto-immune disease last year and hospitalised to protect her organs. She has since undergone chemotherapy.

"On her bed we found dust, which had fallen from the architraves in her bedroom. It is wrong on so many levels," Ms Wong Wan Po said, struggling for words.

"It is so upsetting. All we said from the very beginning is, 'fix the damage'. It is inexcusable that the government can let citizens live in conditions which are not their fault."

She and neighbour Kathryn Calman lodged claims in December 2018 for a government panel to review their claims for compensation, after engineers hired by contractor Fulton Hogan could not determine that the damage was due to the construction.

Their situation is different to homeowners at North Strathfield, where properties above tunnels for the new M4 East, the first stage of WestConnex, have been severely cracked.

Ms Calman said cracks in the walls of her home had worsened significantly since they began to appear in late 2016, which she blames on excavation for the King Georges interchange altering ground water beneath her property.

"The water that would usually flow under our home is now diverted because of the road," she said. "Older homes are particularly at risk because they are more rigid. It’s hard to watch the home that you invested so much time, money and love to be crumbling around you."

She is critical of the way the government has dealt with homeowners and questions the independence of the panel reviewing their claims because it was set up by the state's transport agency, which has partial involvement with WestConnex.

"I was diagnosed with cancer in May 2017, and went back to work during chemotherapy because I was fearful of the cost of taking the government to court," she said.

She also warned that home insurance did not cover property damage caused by nearby construction, which meant homeowners along the route of WestConnex were exposed to the cost of repairing their own houses if they could not easily establish that construction was to blame.

"In our case, it's a 10-year mortgage. The cost of repairs are at least $250,000," she said, adding that repairs include stabilising the foundations of her 90-year-old Californian bungalow.

Transport for NSW said the panel set up to review claims comprised independent experts in fields including structural engineering, mine subsidence and geotechnical investigation techniques, and was working through the claims and reviewing a wide range of information.

"We recognise the concern and stress this process has caused home owners and we reassure the community any damage caused by the project will be fixed as soon as possible," it said.

Transport for NSW said the panel had sought extra independent specialist contractors, as well as information from WestConnex and its contractors, which "are independent" of the agency.

But Inner West councillor Pauline Lockie, a critic of the WestConnex project, said the reviews of residents' claims were being delayed despite the fact that the panel was set up to instil confidence in the process, leaving them in limbo as the damage to their homes worsened.

"People need to be compensated; they need their houses fixed. They can't sell them, they can't afford to fix them and are just stuck," she said.