The Danish royals turned out for a traditional hunting parade at Fredensborg Palace, hosted by Queen Margrethe.

The couple, along with Margrethe, 78, and other guests were seen inspecting the slaughtered deer laid out on the lawn in front of the Palace.

The deer were brought from the nearby Gribskov Forest, where the hunt – hosted by Frederik – took place during the day. 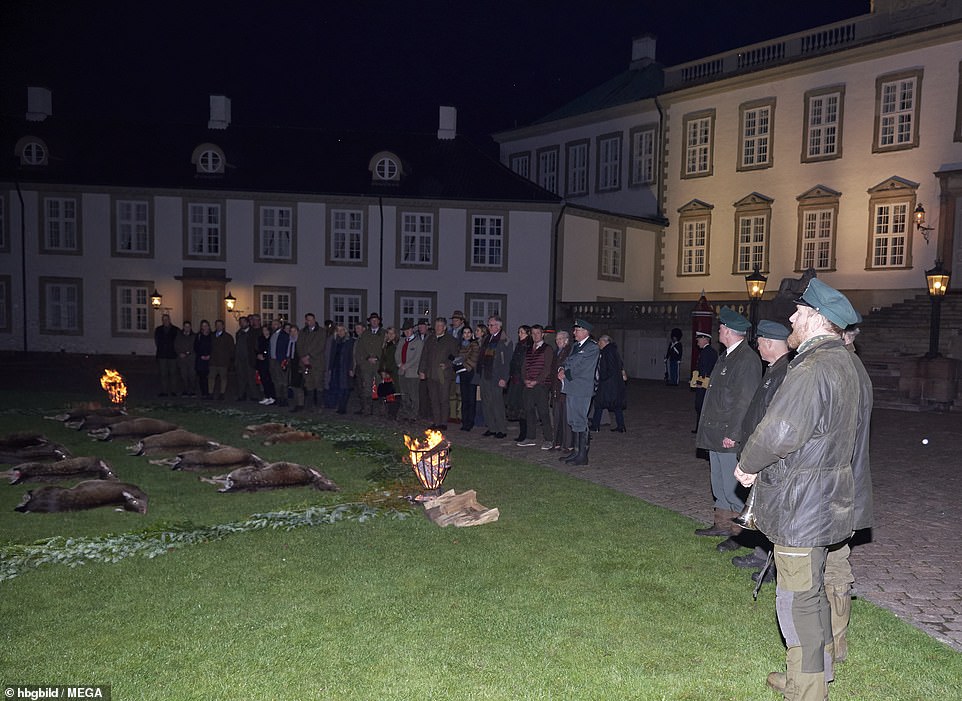 The Danish royals turned out to attend a traditional hunting parade at Fredensborg Palace, hosted by Queen Margrethe. The deer 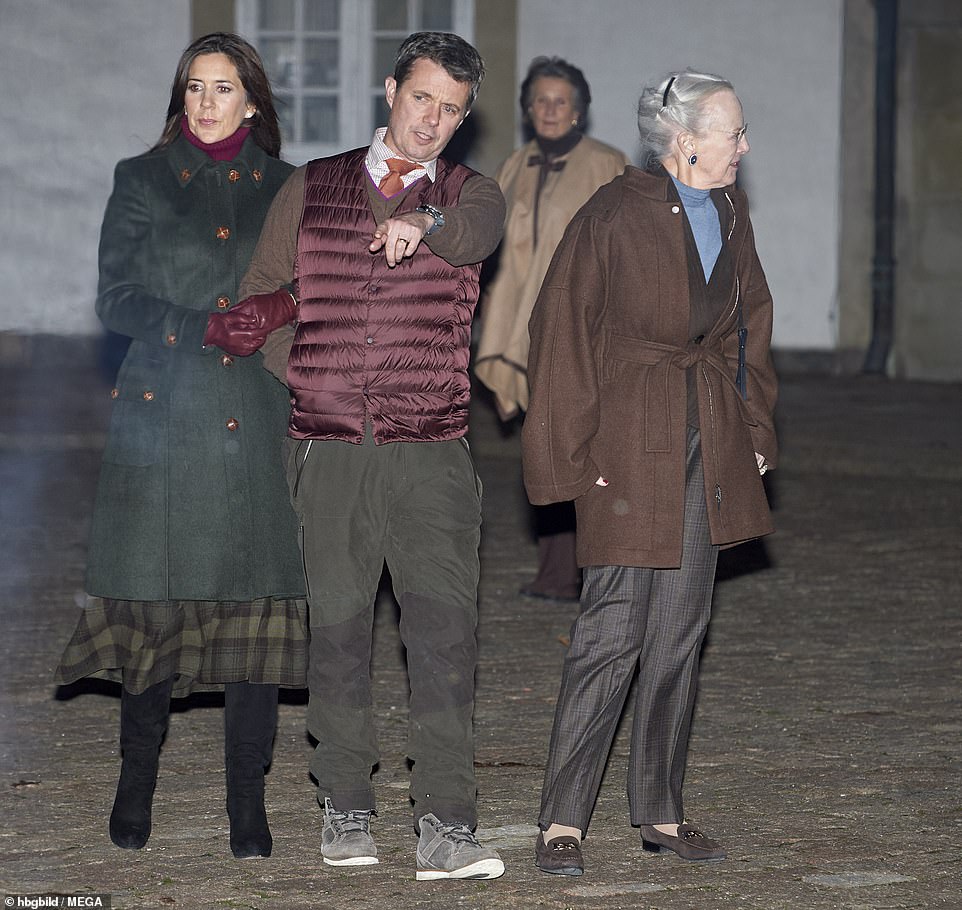 Following the hunt, Margrethe hosted a game parade in front of Fredensborg Palace this afternoon. Photographs show the Danish royals and guests gathered around to inspect the slain deer in front of the Palace.

During the ceremony, it is traditional for the yield from the hunt to be read aloud, followed by a toast to the hunters.

A total of 20 deer and two foxes were killed at the Gribskov Forest, one of the largest forests in Denmark .

Official royal hunts in the Danish state forests take place every year during the hunting season, which from the start of October  to mid January. 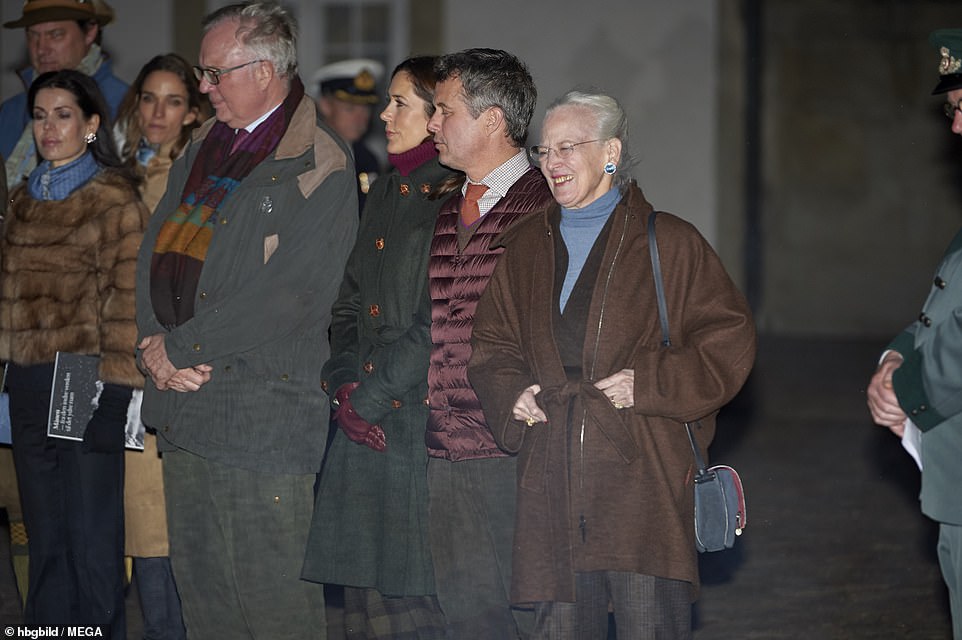 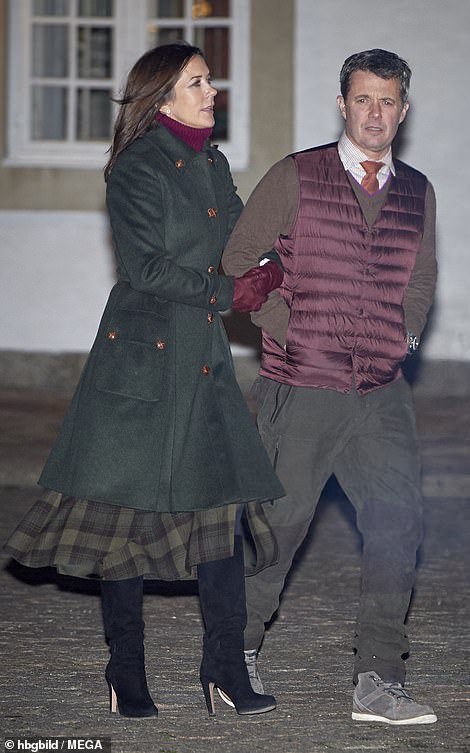 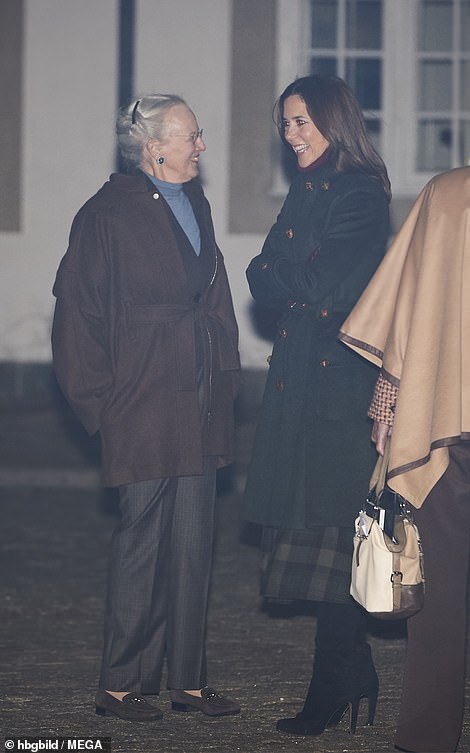 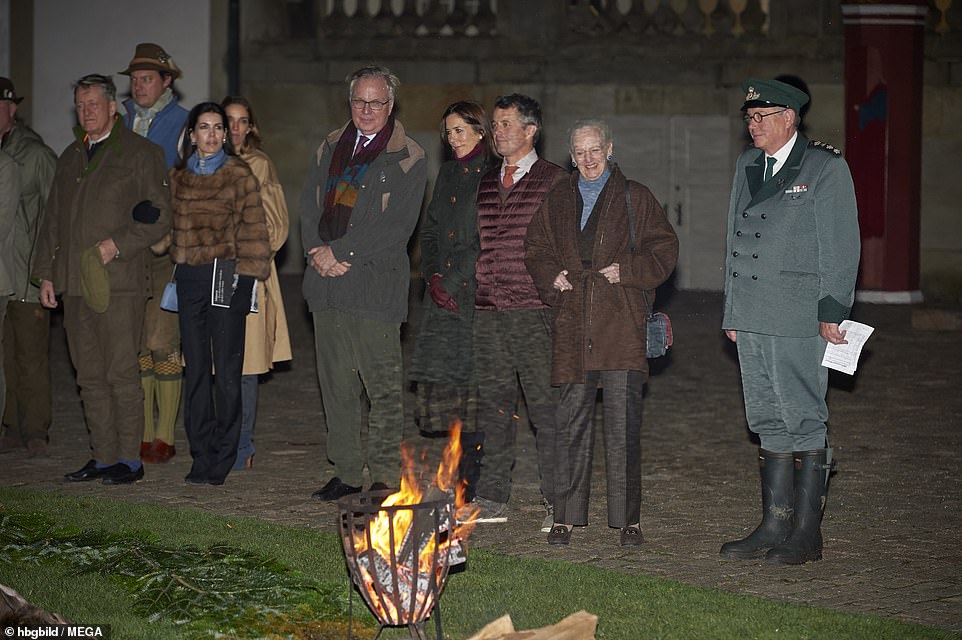 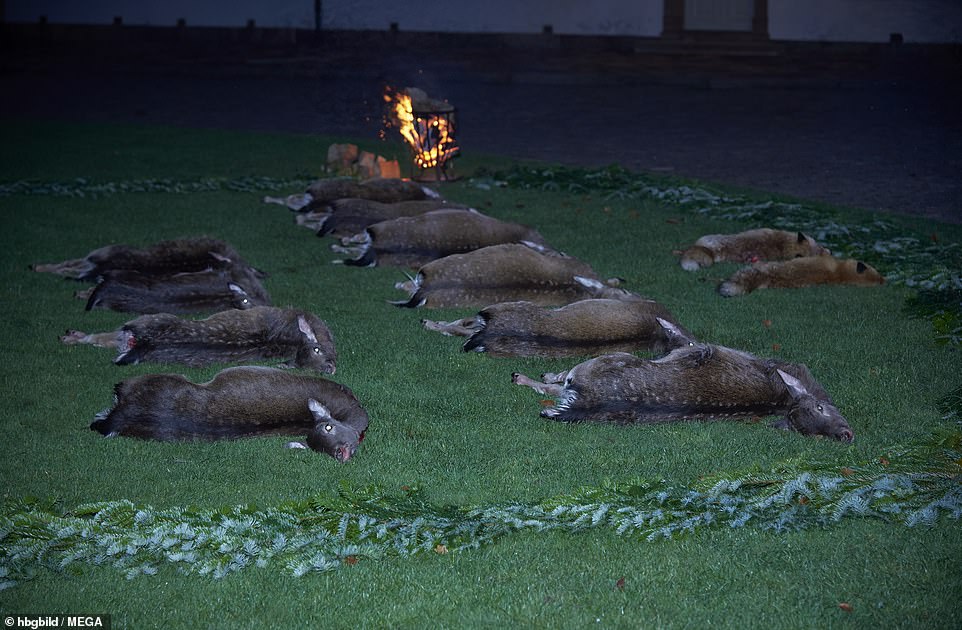 The slain deer were laid out on the grass during the game parade held at Fredensborg Palace, northern Denmark

WHAT IS THE ANNUAL KING’S HUNT IN DENMARK?

The traditional Kongejagt, or King’s Hunt, takes place in the Gribskov Forest, northern Denmark, in November every year.

This is followed by a taffle, or a party, hosted by Queen Magrethe.

A game parade is held at Fredensborg Palace, where the yield is inspected, followed by a toast.

The Gribskov Forest is one of the largest in the country, and has belonged to the Crown since the 16th century.

Due to the hunting interests of the court, the forest was laid out with  hunting purposes in mind.

Mary, 46, looked chic in a forest green coat and checked midi skirt, which she paired with knee-high boots for the event.

She and husband Frederik, 50, regularly attend the traditional game parade following the King’s Hunt, which takes place in November every year.

The couple have previously attended the game parade with twins, Prince Vincent and Princess Josephine, who were five at the time.

The decision to take their children to the hunt, which involve inspecting slain deer, was criticised at the time by animal rights activists.

Ashley Fruno, the associate director of campaigns from animal right’s group PETA Australia, previously said:  ‘Given the now well-established link between cruelty to animals in childhood and violent behaviour in adulthood, not only is it insensitive for Prince Frederik and Princess Mary to teach their children that killing animals is acceptable, it’s also a poor parenting decision.

‘Few people today view hunting as anything other than a violent blood sport, a cheap thrill at taking a life and a display of wanton power over the powerless.

‘It is surely the parents’ responsibility to help children grow into compassionate leaders for their country, with respect for all living beings.’ 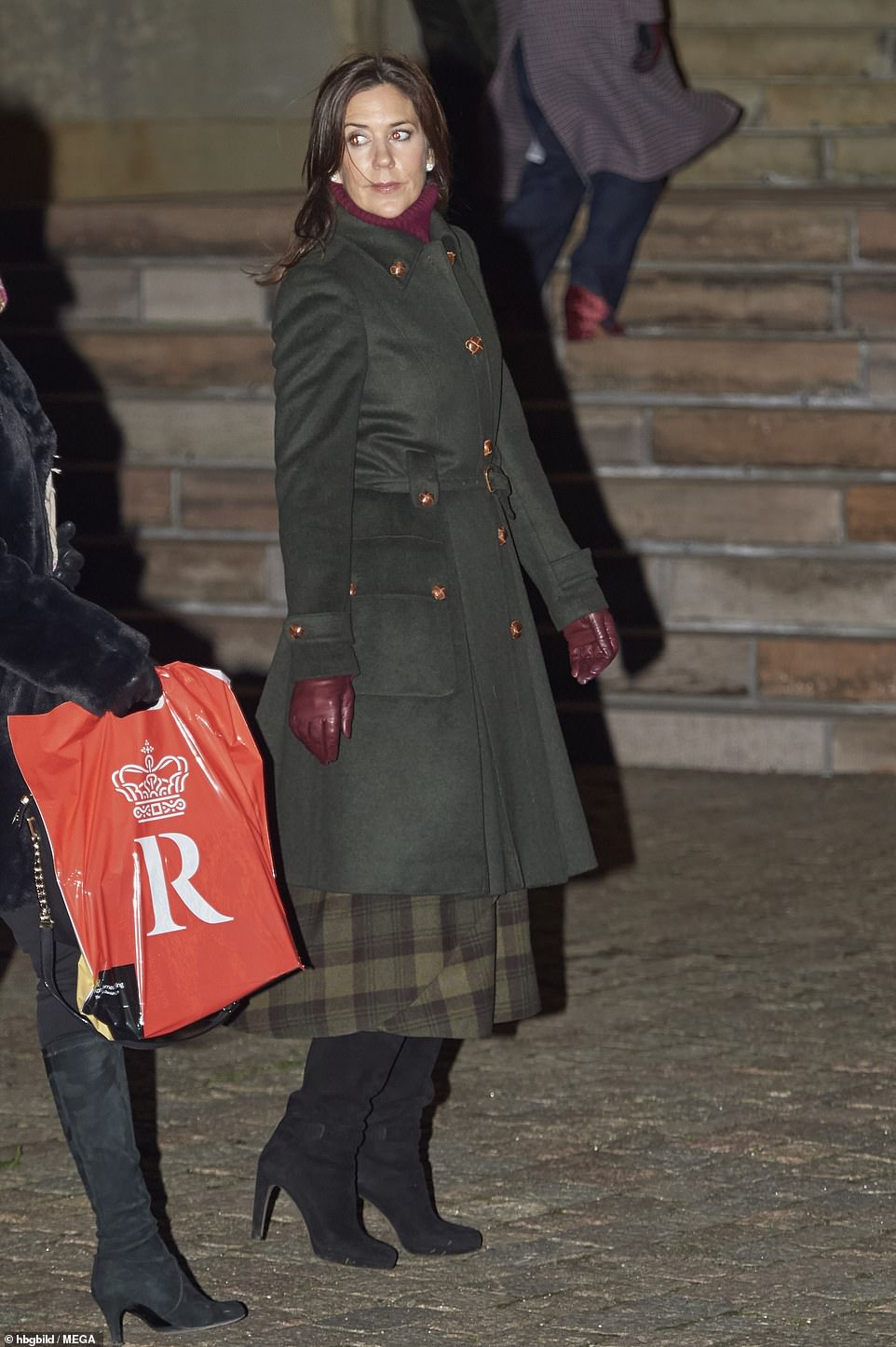 Crown Princess Mary opted for a green coat and burgundy jumper for the hunt, finishing off her look with leather gloves 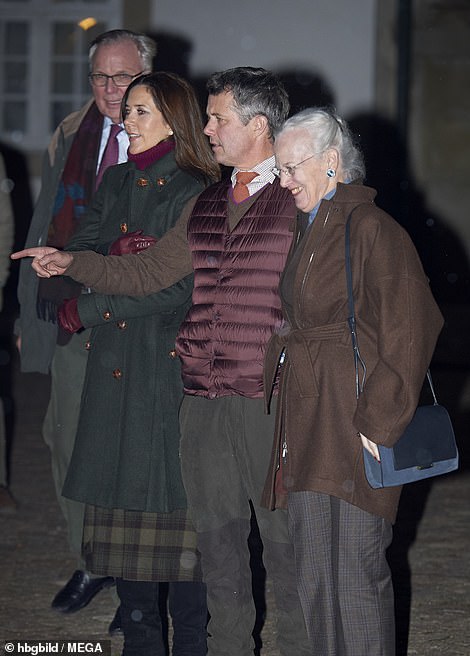 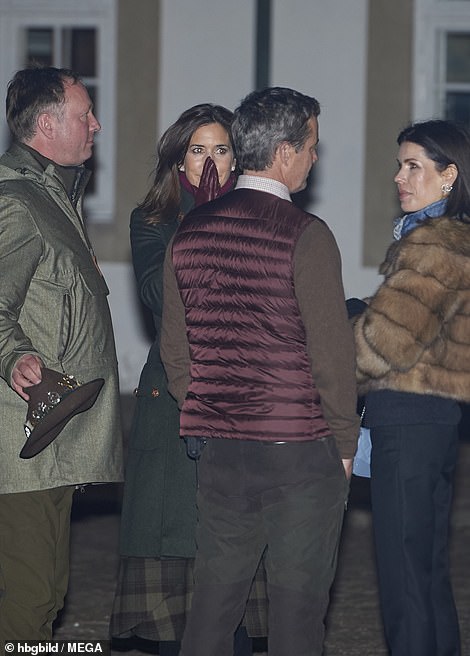 Mary and Frederik were joined by Queen Margrethe and other guests at the traditional Kongejagt – or King’s Hunt – at Fredensborg Palace, northern Denmark 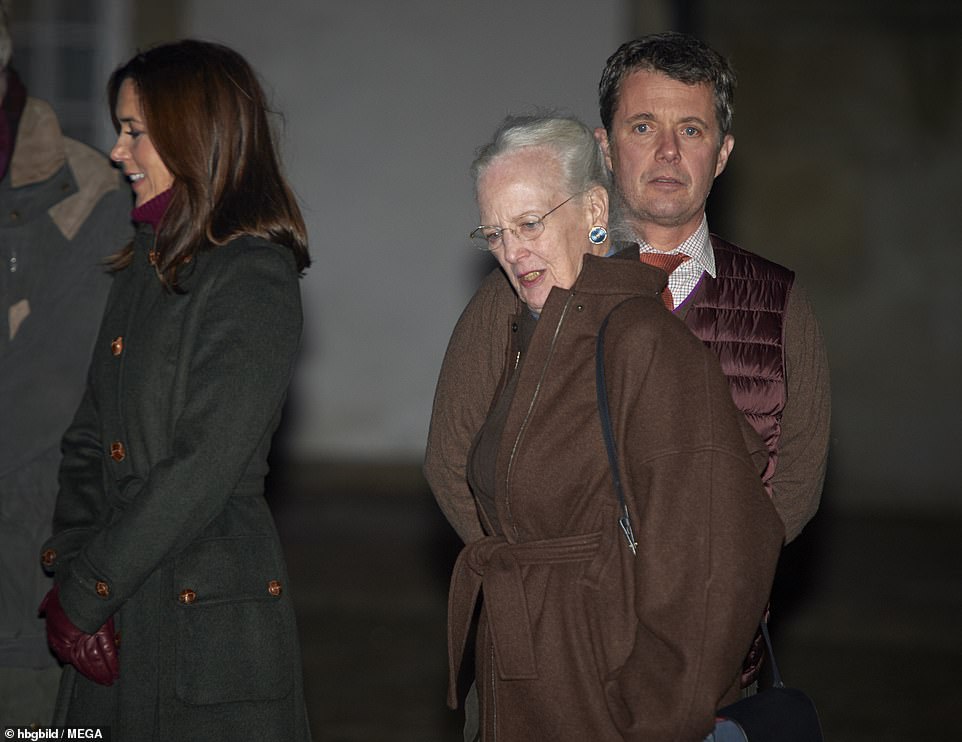 Mary and Frederik’s appearance at this year’s hunt comes after they met the Pope at the Vatican last week.

The couple were visiting Rome in a bid to strengthen ties between Denmark and Italy.

Meanwhile, the pair are likely to have a busy week ahead, as they will attend a banquet at Buckingham Palace to mark Prince Charles’ 70th birthday on Wednesday.

Queen Sonja and King Harald of Norway are also expected to travel the UK for the glitzy dinner.