Doctors and government insiders have raised concerns about what they say is a secretive culture at the top of Victoria's rebooted hotel quarantine system after a man flew in from the US then slipped through Melbourne Airport and avoided quarantine.

The traveller arrived from the US via Sydney on September 24, about three months after flights from overseas were cancelled and the hotel scheme was shut down for international travellers. He then travelled in a car to a house in Toorak and later to Cabrini Hospital to see a sick relative. 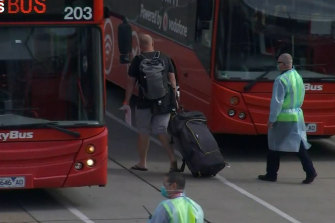 Details of the incident, which the government admits can be attributed to an error in the Victorian department, are included in internal state government correspondence seen by The Age. The documents also show a senior hotel quarantine official directed subordinates not to file an incident report.

The failure to direct the traveller to quarantine, the third such incident revealed since July, and the request to not formally log the error was revealed to The Age by two senior officials familiar with the incident. They claimed that a "toxic" workplace culture had developed in the scheme at the time which bred secrecy around decision-making and retribution against staff who rocked the boat.

"They crush dissent," one of the sources said. "The fear of things being leaked impacted operations and the ability to provide a safe service to the public. If there is poor management and culture in emergency management, it leads to bad outcomes."

The insiders who worked on the second iteration of the hotels program, when it was run by the Department of Justice and Community Safety, spoke on condition of anonymity in order to discuss sensitive events that could lead to disciplinary action being taken against them. 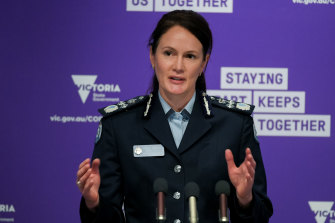 Australian Medical Association Victorian president Julian Rait said the incident was "very disappointing" and groups such as his had called repeatedly for increased disclosure of failings by health authorities.

"If you have open disclosure of errors, you can learn from them," he said.

"It's not only the right thing to do, it also enables you to acknowledge mistakes and learn … Can they really be trusted to fix themselves?"

"It emphasises again the need for greater transparency concerning quarantine and how it's been administered." 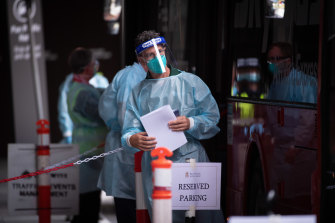 The justice department took control of the hotel quarantine scheme, led by Corrections Commissioner Emma Cassar, in July after well-documented problems under the Department of Health and Human Services.

Since November 30, a new agency called COVID-19 Quarantine Victoria, overseen by Police and Emergency Services Minister Lisa Neville, has run it. Ms Cassar is the head of that agency.

A spokeswoman for the Andrews government said the hotel program had now been "completely overhauled – with strengthened oversight, management and professional standards and embedded infection prevention and control".

"These new structures, standards and measures encourage a culture of transparency and openness. All staff are highly trained and are encouraged and supported to raise any issues or risks, so they can be acted on quickly," the spokeswoman said.

The man who arrived from America had permission to travel to Melbourne under the exemption scheme to see a family member in palliative care. He had received a negative test at Sydney airport before flying to Tullamarine, but still should have gone directly into hotel quarantine, which was at the time taking travellers with exemptions and Melbourne people unable to quarantine at home.

However, he was not greeted at the airport by a government official and taken to a hotel. A state government spokeswoman has confirmed that officials did not have his flight details, so they were unaware of his arrival.

The man travelled first to a relative's home in Toorak. A government authorised officer, empowered to enforce public health rules, did not serve the man with a detention notice until three days after his flight arrived, and only after the man himself had contacted health authorities to inform them he had not quarantined.

Internal documents show the man then drove himself to the Park Royal hotel to serve his quarantine, but stopped off to see a relative at Cabrini hospital in Prahran on the way to the hotel.

The man did not contract COVID-19 at any point.

Two concerned insiders say the incident was one of a number of slip-ups in the second iteration of the program, and that a top-down management style had risked creating poor practices that even in the revamped scheme could allow the virus to spread from an infected guest to a worker.

There are seven active cases inside Victoria's "hot" hotel. On Wednesday, a man who works as a van driver shuttling airline crew between Sydney Airport and their accommodation tested positive to coronavirus.

Staff turnover since Justice took control of the program in July illustrated what the workers called the poor workplace culture. A commander, one of the most senior roles in the program, left their role, along with at least half of the site and group managers, according to the two senior sources. Some staff returned to previous government roles they were seconded from.

The departure of experienced officials, the insiders said, meant senior roles were often filled by people with insufficient expertise. Officials who had been involved in the scheme since its inception in March had been ignored as the department attempted to reform the program, the sources said, meaning lessons learnt during the first iteration of the program had been lost.

The insiders say one official was removed from her position after allegedly directing a COVID-positive resident in the locked-down Flemington and North Melbourne public housing tower to travel to a quarantine hotel in an Uber. The official has denied giving the instruction.

An official who was suspected of selling alcohol to guests at the Brady Hotel was stood down following media attention in August. The allegations against the man were unable to be substantiated in an internal investigation.

In another alleged incident, dozens of backpackers from Base Backpackers hostel in St Kilda were transported to quarantine hotels in early August, including some who were driven in taxis.

Three of the 40 backpackers had tested positive to coronavirus and the remainder were close contacts. A significant proportion of the group eventually tested positive after they entered hotels including the Grand Chancellor and Brady.

The government denies COVID-positive people were taken to hotel quarantine in taxis, with a spokeswoman saying only close contacts who were not displaying symptoms were transported that way.

The hotel program sources said senior officials deemed the less-than-30-minute trip to be of low risk and a decision had been made to not inform taxi drivers the passengers were close contacts.

A spokesman for the Community and Public Sector Union confirmed the union had been involved in a number of workplace matters where employees claim to have been dismissed in reaction to alleged mistakes.

Do you know more? Send an encrypted email to [email protected]