The property industry has ramped up its political donations to a fresh peak that takes its total funding to $54.2 million over the past two decades, finds new analysis that calls for curbs on the way big companies buy influence.

The donations rose to $5.7 million in 2019 in a long-term trend towards greater spending on the major political parties, handing federal Liberals about twice as much as Labor. 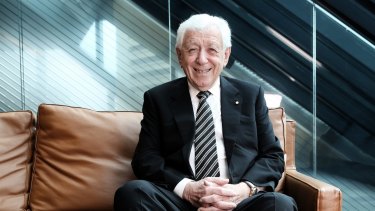 Westfield co-founder Frank Lowy is among the property developers leading the list of donors over two decades.Credit:Louise Kennerley

Billionaire property developers including Westfield co-founder Frank Lowy, Harry Triguboff of Meriton, John Gandel of the Gandel Group and Lang Walker of the Walker Group are among the top 10 donors over two decades.

Another property magnate, Chau Chak Wing, is the industry’s second-biggest donor after the Lowy family, amid years of controversy over his alleged links to groups connected to the Chinese government.

The findings, from the Centre for Public Integrity, follow the group’s analysis of resource industry donations earlier this month, which showed that sector gave $136.8 million to parties and campaign groups over two decades.

“Property developers are the second-largest donating industry behind resources,” said Geoffrey Watson, SC, a barrister and director of the Centre for Public Integrity.

“Property developers rely on permits and licences to do business. This means that those companies with greater access and political favour are more likely to gain competitive advantage.”

The centre, a non-profit group led by corruption investigators and former judges, is seeking law reform including caps on donations and real-time disclosure to curb the purchase of influence, as well as the creation of a national integrity commission to watch over politicians and public servants.

The analysis comes ahead of the Australian Electoral Commission’s release of 2020 financial year donations data this Monday, revealing how funding changed after the last federal election and during the early months of the coronavirus pandemic.

As well as considering direct payments to parties, the centre’s report reveals $3.5 million in payments to groups that engage in public campaigns including the Construction, Forestry, Maritime, Mining and Energy Union and the Business Council of Australia.

But the analysis is limited by challenges with the AEC disclosure regime, which does not reveal all payments and has been dogged by years of ambiguity about “other receipts” such as payments to attend political events, which companies deny are donations.

“The Liberal Party’s federal secretariat has been the recipient of more than double the funds received by the ALP’s federal branch,” the report says.

While companies regularly deny using donations to seek favours, many have been exposed for seeking deals with political leaders at the same time they donate to federal or state campaigns.

The Age and The Sydney Morning Herald have revealed ties between governments and property developers dating back decades, including donations from Mirvac and Walker.

At a state level, the Casey land scandal in Victoria highlighted ties between developers and the Andrews state government before the 2018 state election.

The Centre for Public Integrity cites NSW ministerial diaries, which are disclosed under state rules, to argue that donations can help secure access to ministers for companies seeking favourable decisions.

The Meriton Group met NSW ministers on at least 18 occasions between January and September last year, the analysis says, including talks on housing supply, the construction industry, tenancy relief, planning policy and the COVID-19 pandemic. 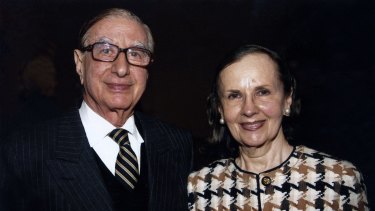 The single biggest property donor last year was Sugolena, a private company set up by Isaac and Susan Wakil.

While donations from property developers have been banned under state law in NSW and Queensland, they are legal in Victoria and remain a significant part of federal political funding.

Yet the long period covered by the report meant payments to the two major parties were worth $13.6 million in NSW over two decades, more than triple the $4.9 million paid to the same parties in Victoria despite the recent ban.

When developer and former Newcastle mayor Jeff McCloy challenged the NSW donation ban, the High Court ruled against him in a judgment that said politicians may be “tempted to bargain” with wealthy donors over decisions.

In a joint judgment by Chief Justice Robert French and Justices Susan Kiefel, Virginia Bell and Patrick Keane, the court also warned of the long-term threat from “clientelism”, in which politicians depend on donors.

“This particular concern is that reliance by political candidates on private patronage may, over time, become so necessary as to sap the vitality, as well as the integrity, of the political branches of government,” the court said.

Westfield made $3.7 million in donations over two decades, eclipsing others even though the Lowy family sold the company in 2017 and appeared to make its last donation in 2016.

One of Mr Lowy’s private companies, Croissy, was ranked as the fourth-biggest donor with $2.6 million in payments over the period even though it was deregistered in 2010.

′ … those companies with greater access and political favour are more likely to gain competitive advantage.′

That took the Lowy family’s interests to $6.3 million in donations when Croissy and Westfield were combined, making this group the biggest source of funds in the property business.

Mr Chau is suing the ABC, Nine, owner of this masthead, and investigative journalist Nick McKenzie over news reports in 2017.

In a statement of claim, Mr Chau’s lawyers said the reports defamed their client in six ways, including by suggesting he was a spy who “betrayed his country, Australia” in order to serve China’s interests, and paid large sums to Australian political parties that were intended as bribes. The ABC and Nine deny the publications convey those meanings.

The single biggest property donor last year was Sugolena, a private company set up by Isaac and Susan Wakil, who came to Sydney after World War II and assembled a portfolio of empty buildings across the city.

The couple sold their properties in 2014 to raise $200 million for a charitable foundation. While Sugolena had no history of substantial donations, the company, led by Mr Wakil after the death of his wife three years ago, gave $4.1 million to the Liberal Party in the weeks before and after the May 2019 federal election.