It turns out Christian Bale, a very famous actor, is rather partial to telling self-deprecating stories that mock his status as a very famous actor. Here he is talking about the first time he collaborated with Hollywood filmmaker James Mangold – who directs Bale in his impressive new feature Ford v Ferrari – on the 2007 western remake 3:10 to Yuma.

“He would be pained at me because I would be saying to him, ‘Well, I have this revolver and it has six bullets, so when I run onto the street shooting I'll have to reload’, and he’d be like, ‘For f—’s sake Christian, there’s a thing called the edit room and, if I want to, I’ll make you shoot 32 bullets in a row and piss off every gun expert watching’,” says Bale, supplying an exasperated voice for Mangold. 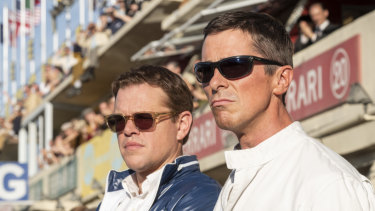 The connection between the 45-year-old actor and Mangold – who Bale describes as “a shape-shifter” due to a body of work that includes Copland, Walk the Line, and Logan – was stronger than any method cowboy concerns. An attempted collaboration on a detective noir in 2015 foundered when Bale tore his anterior cruciate ligament just before shooting was scheduled to begin, but he was Mangold’s first choice to play the real life 1960s race car driver Ken Miles in Ford v Ferrari.

The story of how in the mid-1960s Detroit powerhouse the Ford Motor Company decided to commission a race team to tackle Europe’s leading manufacturers at France’s prestigious and unforgiving 24 Hours of Le Mans race, the film is told through the fractious friendship between Matt Damon’s former champion racer turned team boss, Texan Carroll Shelby, and Bale’s gifted but uncompromising English lead driver.

Whip thin after losing the more than 30 kilograms he put on to play former U.S. vice-president Dick Cheney in 2018’s vituperative black comedy Dick, Bale pitches his shoulders forward as Miles, with his head tilted so that he leads with his chin. The expressive body language is both inquisitive and pugnacious, which Bale attributes to his extensive research for the role as opposed to the summary decisions of a very famous actor.

I may soon be in a moment in time that I’ll look back on very fondly.

“It gives you evidence when the director goes, ‘What the hell are you doing?’ You can show them video clips or references from a friend and say, ‘That’s what I’m doing, because the guy actually did it,' ” Bale says. “There are great eccentricities that are factual and not just from the potential worrisome ego of an actor. That’s actually quite liberating.”

Miles’ nickname was ‘Bulldog’ and, as a World War II veteran who commanded a tank in the liberation of Europe, he was subsequently unwilling to cut corners or tolerate fools. But as played by Bale, he’s alert to compromise but not aggressive. Instead of being an obsessive loner off the track, Miles takes sustenance from his wife Mollie (Caitriona Balfe) and son Peter (Noah Jupe). Racing, like his family, is a transcendent experience.

Bale is renowned for the intensity of his performances: there’s his tormented Batman in Christopher Nolan’s The Dark Knight trilogy and numerous more going back two decades to his toned monster in American Psycho. But in recent years Bale has found cracks of vulnerability in his portrayals, notably a melancholic conman in American Hustle and his walled-off, contrarian investor in The Big Short. Ken Miles is an extension of how he’s quietly opening up driven men instead of sealing them off. 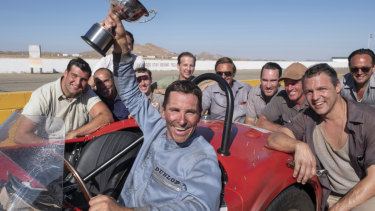 Christian Bale says a knowledge of car racing is not necessary to enjoy Ford v Ferrari.Credit:

“When I finish a film I know that however happy I might be it’s always a surprise. I view films as a temporary art form – it’s just a moment when a director had to say stop, and then you walk away,” Bale says. “Because of all the hurdles that get thrown at you, they can either be absolutely sublime or frustrate you incredibly. And you never know. That’s the thing that keeps filmmaking endlessly interesting. It’s a new team, a new job, every single time.”

While the filmmaking technique in Ford v Ferrari, with its emphasis on shooting races without digital effects and getting as close as possible to Bale while he’s behind the wheel, makes for gripping sequences, there’s also considerable struggle off the track. Ken Miles and Carroll Shelby have to fight against the monolithic, interfering Ford – an analogy for the way directors and actors have to operate within the Hollywood system.

“Lots of correlations between the story in Ford vs Ferrari and the film world,” confirms Bale. “In that respect there has to be a healthy conflict: neither have anything without the other. Films cost a lot. Even the lowest-budget film I’ve ever made required the director to take out a second mortgage on his house. We are obliged to recognise that this mixture of creation and conflict actually results in very good things.”

Bale is intimately familiar with how the movie industry functions – and his place within it. He did his first promotional tour at the age of 14, a bright-faced boy who gave a remarkable lead performance in Steven Spielberg’s 1987 World War II drama Empire of the Sun. Since then the married father of two has worked ceaselessly and navigated some mid-career flare-ups, reaching a rarefied height without revealing a great deal of himself.

“I recognise that I’m in this unfathomable and fortunate place where I get to choose what I do with less and less necessity but more artistic choice. I also recognise that that may not last very long,” Bale says. “I may soon be in a moment in time that I’ll look back on very fondly. Of course the longer you do something there’s the dangers of cynicism, but also the frustration of continued disappointment in yourself – and that very much drives me.”