A Chipotle fan-favorite is back on the menu — but only for a limited time.

The restaurant chain announced Tuesday that it is temporarily bringing back carne asada in the U.S.

The steak option, which is specially seasoned and topped with fresh lime juice and chopped cilantro will be available to Chipotle Rewards members first, starting on Tuesday, according to the announcement.

Rewards members will only be able to order carne asada on Chipotle’s website or its app.

COCA-COLA TO DEBUT HARD SELTZER FROM TOPO CHICO BRAND IN FIRST HALF OF 2021: REPORT

On Thursday, non-rewards members will also be able to order carne asada online, through the Chipotle app or website.

Finally, the steak will be available for in-person ordering at Chipotle restaurants and third-party delivery platforms — as well as the Chipotle website and app — starting on Sept. 28.

Eventually, Chipotle will bring carne asada back to menus in Canada, according to the announcement. Carne asada will also be available in France for the first time.

According to the announcement, Chipotle has partnered with new farmers and ranchers to supply the beef for its carne asada, so that the dish “comes from animals given no antibiotics or added hormones and that are raised responsibly.” 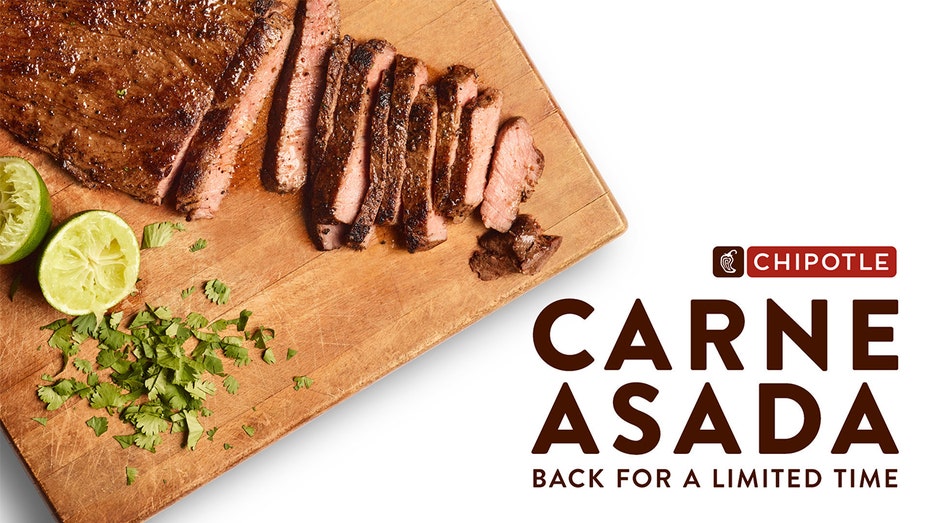 Chipotle is bringing back carne asada for a limited time to U.S. menus. The steak option will be available to rewards members online first, then to everyone online and finally in-restaurants by Sept. 28. (Chipotle)

BEYOND MEAT TO CAPITALIZE ON PLANT-BASED POPULARITY, INTRODUCE BREAKFAST SAUSAGE IN 5,000 LOCATIONS

"To bring back carne asada to our menu, we underwent an extensive vetting process to find more suppliers that meet our stringent Food with Integrity standards," Chris Brandt, Chipotle’s chief marketing officer said in a statement.

"Our fans love our carne asada because they can taste the care and culinary expertise that goes into this recipe from farm to bowl,” Brandt added.

The Mexican grill first released carne asada late last year and the item was a huge hit, the company said.

Carne asada was the “fastest-selling new protein launch in history” and was sold to 10 million people when it rolled out for the first time, according to the company. In fact, Chipotle said that about 5 million of those people were first-time customers at the chain.