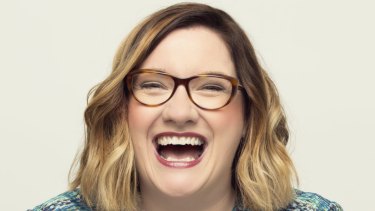 British comedian Sarah Millican has come a long way after just over a decade on the stage. Far from being a career comedian, the northerner didn't start stand-up until hitting her thirties, in the wake of a divorce. Things started well – she won the Edinburgh Fringe award for best newcomer in 2008 – and have only got better since. Today she's one of Britain's most popular comedians, with more than 1 million Twitter followers and enough Australian fans to book two shows at the cavernous Hamer Hall.

Millican took to the stage to rapturous applause on Monday night, if only for a few minutes while introducing support act Sally-Anne Howard – another Englishwoman who warmed up (and occasionally shocked) the crowd with her dark humour.

When it was Millican's turn she immediately launched into her trademark warm and bubbly style, which belies the foul-mouthed vulgarity of much of her material. Body parts and bodily functions featured heavily but it was all done with such charm that only the biggest wowsers could possibly be offended.

She chatted with members of the audience about the humiliation of getting a bra fitted and about how couples keep their sex lives going. I'm sure there were plenty of people knowingly nudging their partners throughout.

Millican's talent lies in taking taboo topics – albeit some of them tried and true comic material already – and making them relatable. Towards the end of the show she told us she knew what we were all thinking: "That's disgusting … I do that, too." It sums up her appeal perfectly.