Could YOU escape the UK’s toughest mazes? Bird’s eye views challenge you to find your way out of tricky labyrinths – including a 2-acre warren at Blenheim Palace

A mind-boggling new type of brain teaser is leaving some puzzle fans feeling a little lost.

QuickQuid tracked down the most impressive mazes in the UK and created bird’s-eye renders to provide puzzle fans with the chance to test out some of the UK’s toughest mazes from the comfort of their own home.

Mazes have fascinated people since the first labyrinths were invented thousands of years ago – and have since had starring roles in films including The Shining, Labyrinth and Harry Potter & the Goblet of Fire.

But will you give up as you fall further down the rabbit hole, or will you uncover the best escape route?

Scroll down for reveal 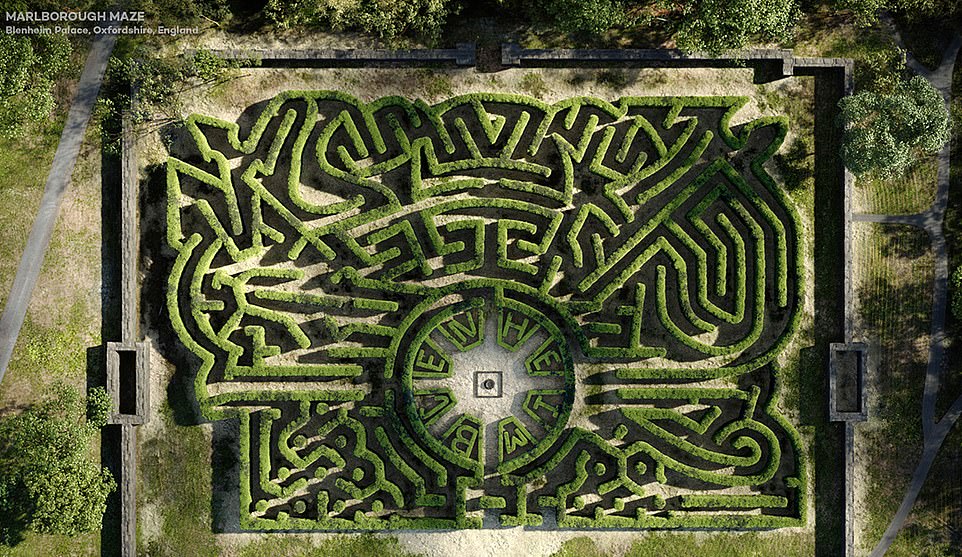 The Marlborough Maze at Blenheim Palace features 3,000 yew trees covering nearly 2 acres, and a hat tip to Winston Churchill, who was born at the palace, in the form of “V”-shaped hedgerows 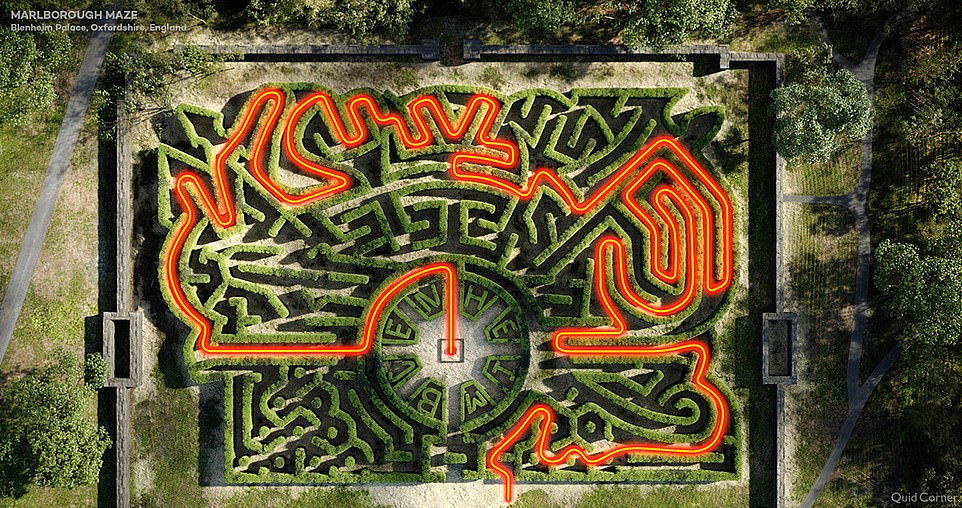 It’s a wiggly route to the centre of the Blenheim Palace maze, although once you’re there there’s only a quick dash to the exit necessary

The design incorporates cannon firing a ball, banners, and trumpets, inspired by Grinling Gibbons’s Panoply of Victory carvings on the roof of the main building.

It also features a hat tip to Winston Churchill, who was born at the palace, in the form of ‘V’-shaped hedgerows.

Meanwhile the Castlewellan Peace Maze, in Castlewellan, Northern Ireland, boasted to be the largest permanent maze in the world until the Pineapple Garden Maze in Hawaii stole the title in 2007. 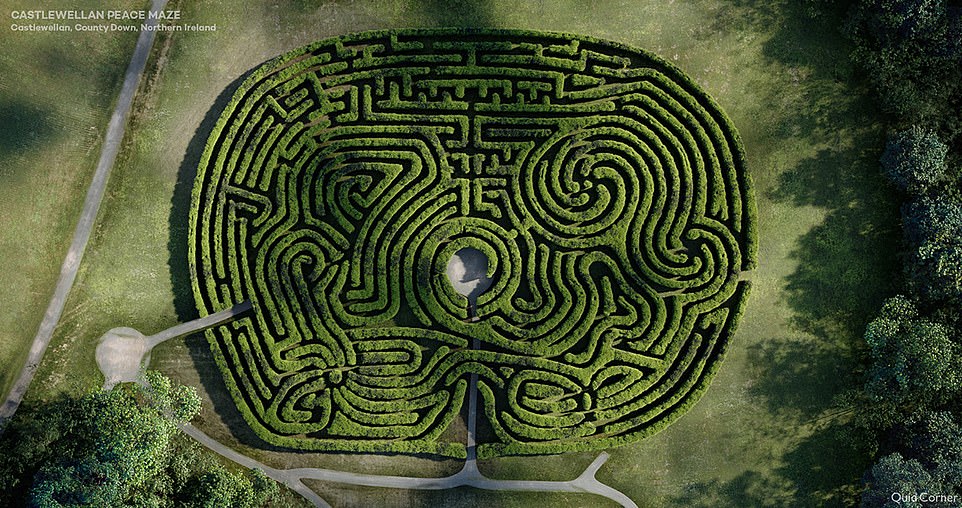 Meanwhile the Castlewellan Peace Maze in Northern Ireland was the largest permanent maze in the world, before it was overtaken by the Pineapple Garden Maze in Hawaii in 2007 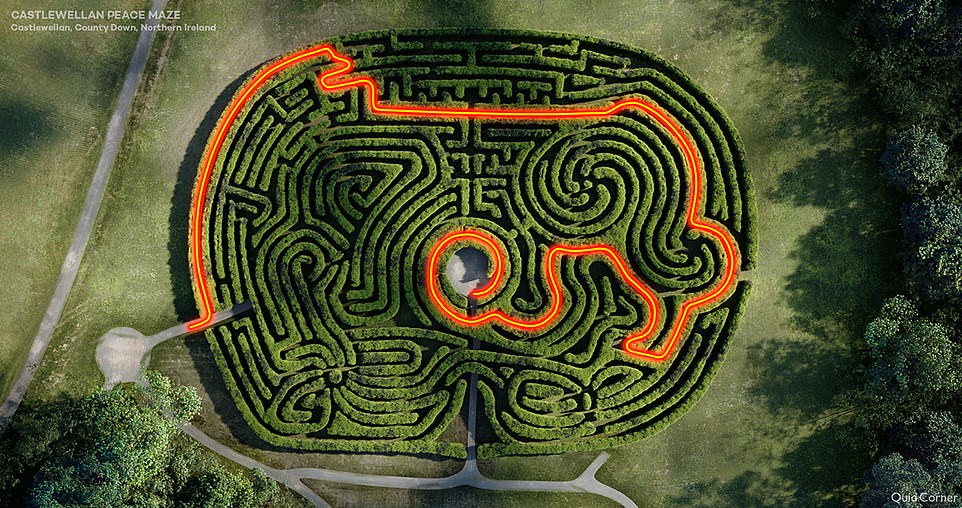 It would be easy to get lost in the dead ends of this labyrinth, though it’s quite a straight forward route to the centre – if you know how

With over 6,000 yew trees the Peace Maze is a symbol of peace and reconciliation in Northern Ireland.

Surrounded by trees, shrubs, mountains, lake, castle, and the sea, the area is more than a day out.

And if you do make it to the centre of the maze, there’s a bell to chime to let everybody know!

Heatherton Hedge Maze is the perfect maze for children to solve. 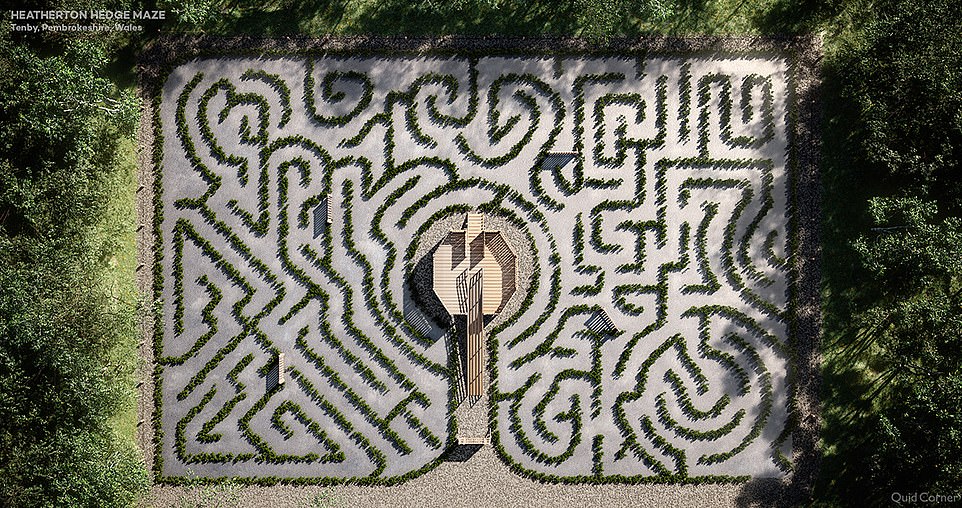 The perfect maze for children: Heatherton Hedge Maze, in Wales, only features small trees that it’s possible for adults to look over. But can you solve it from a bird’s eye view? 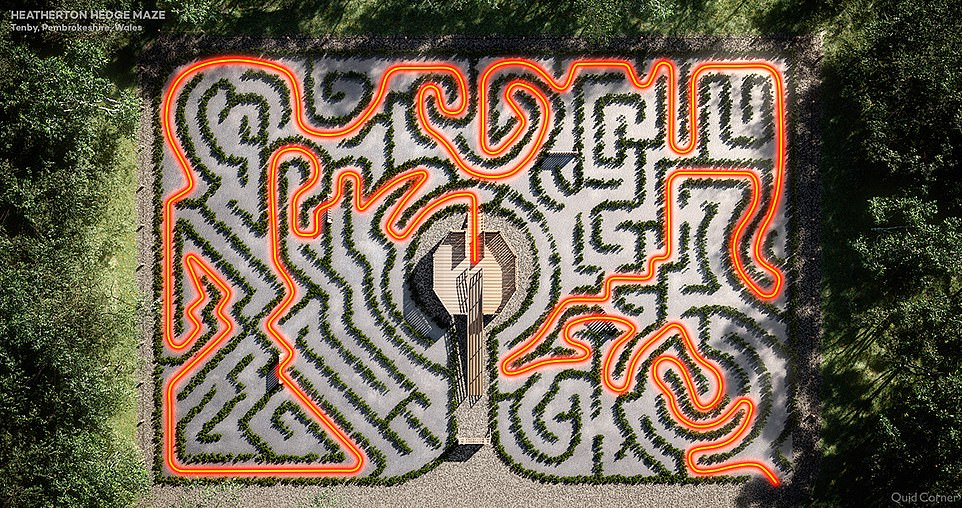 It’s a long walk around the maze in Wales to find the centre, and it doesn’t promise to be any easier from the bird’s eye view

The labyrinth, in Pembrokeshire, Wales, features trees that are still small enough for an adult to see over the top of them.

The maze was created in 2015 as part of Heatherton’s commitment to ecotourism.

Whilst the maze at Traquair House in the Scottish Borders doesn’t feature any dead-ends, it’s still a head scratcher. 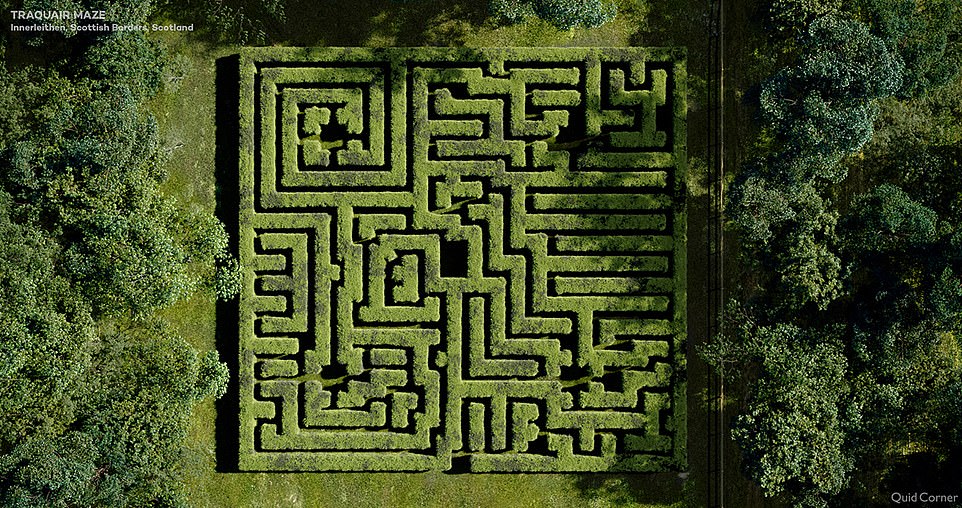 Meanwhile the Traquiar maze at Traquiar House, in the Scottish Borders, is a head scratcher as it doesn’t feature any dead-ends 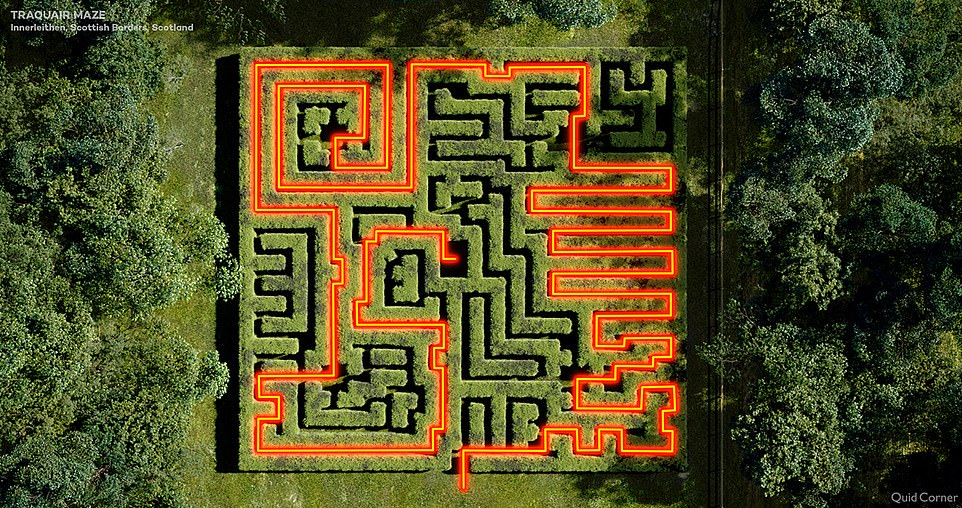 It’ll take time and patience to solve this brainteaser, and those trying to solve it can expect to get lost around the edges of the maze as they try to reach the centre

Visitors have to find four stopping points on the way to the heart.

In the south of the country, the Cornish Maize Maze is changes up its route every agricultural year.

In 2018, they went for a dinosaur-themed ‘Jurassic Jumble.’

Set on a working farm amid the sprawling hills of the Duchy of Cornwall estate, it’s a great place to catch some summer rays and fresh air. 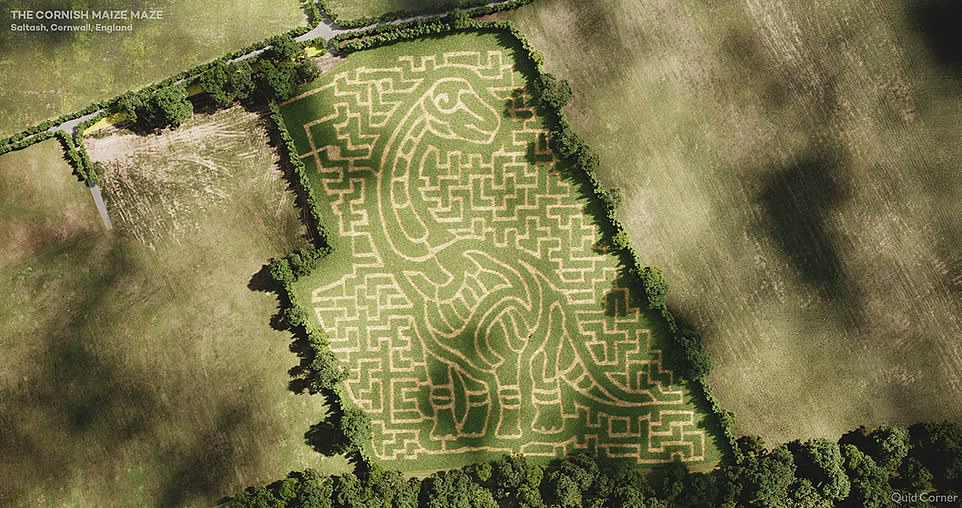 This dippy maze in Cornwall, changes its pattern every year – in 2018, visitors were asked to make their way through an enormous dinosaur 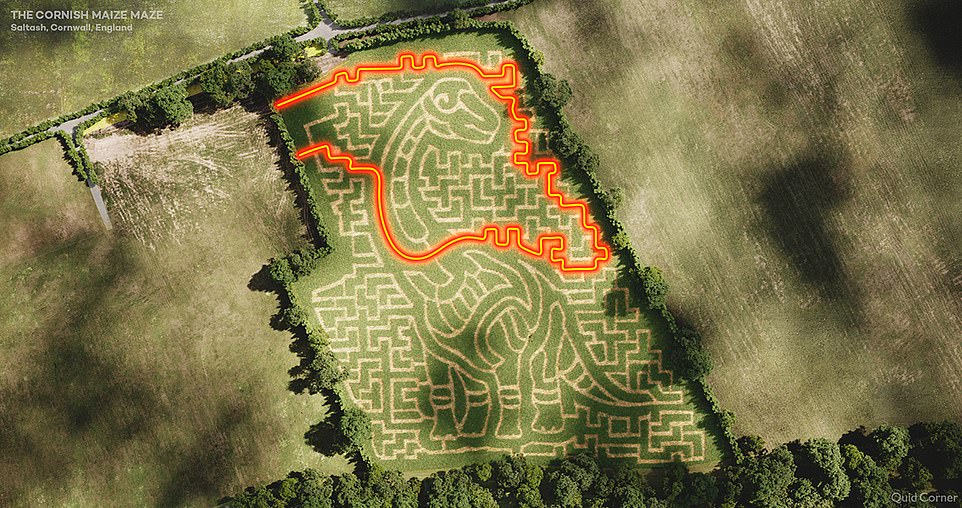 Surprisingly, the route can be solved in only the top half of the maze – meanwhile anyone who ventured down to the dinosaurs feet would be on quite the detour

For those desperate to be challenged, Noah’s Ark Maze in Bristol may be the one.

Rather than just one maze, it features multiple different labyrinths to test out.

The beehive maze, for example, is a 3D structure across four levels – perfect, perhaps, for those charmed by the M.C. Escher puzzle at the end of Labyrinth.

But it’s the outdoor Mega Monster Maze, which is all the trickier for becoming muddy when it rains, we’re putting puzzlers to the test try to solve it. 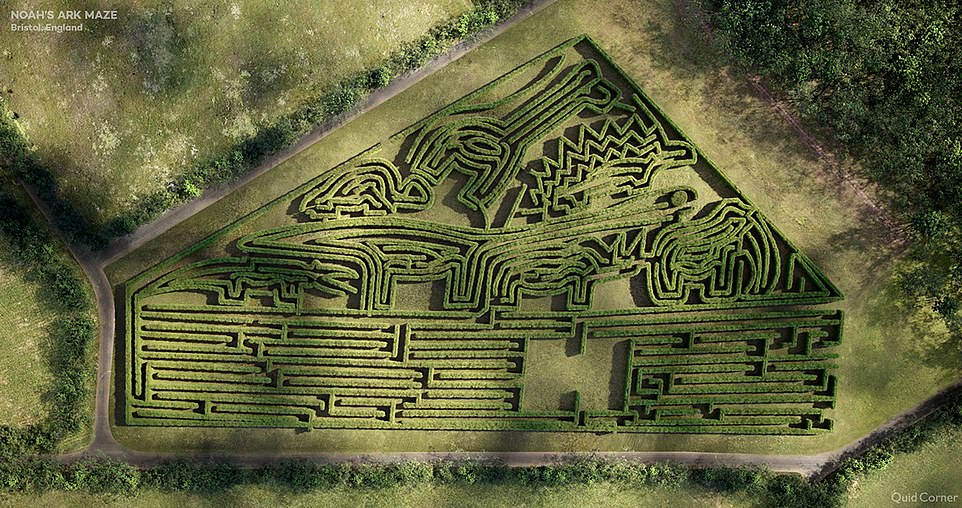 This Mega Monster maze is just one of several in the Noah’s Ark Maze in Bristol, and here’s a hint – it’s a long way around to find the exit! 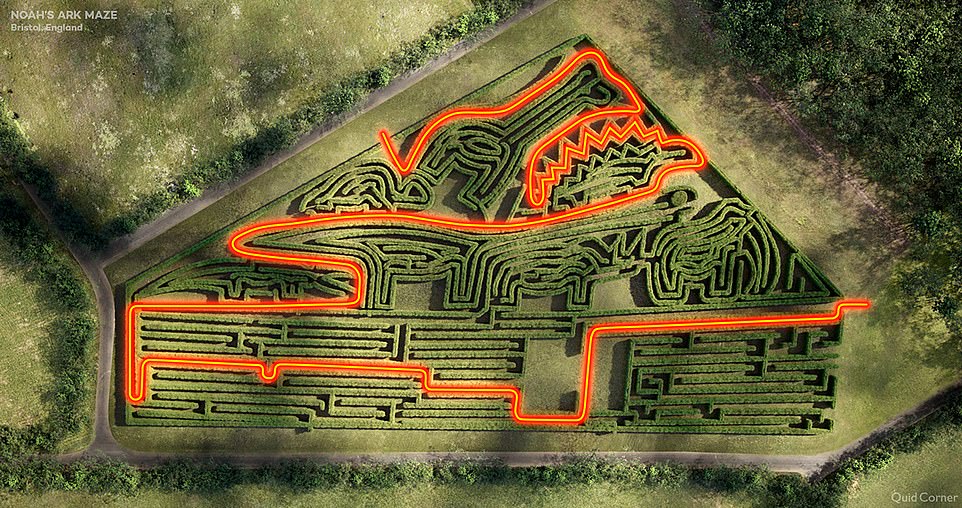 With over 14,000 beech trees lining the way, and seven Noah’s Arc animals to spot on the way, this route in Bristol is a headscratcher

Around 14,000 beech trees line the way, and seven of Noah’s animals can be spotted en route.

Another Jurassic themed maze comes in the form of the York Maze.

It’s Britain’s largest labyrinth, and covers an area greater than the size of eight football pitches.

In case you didn’t think it could get any more amazing – it’s actually made of maize. 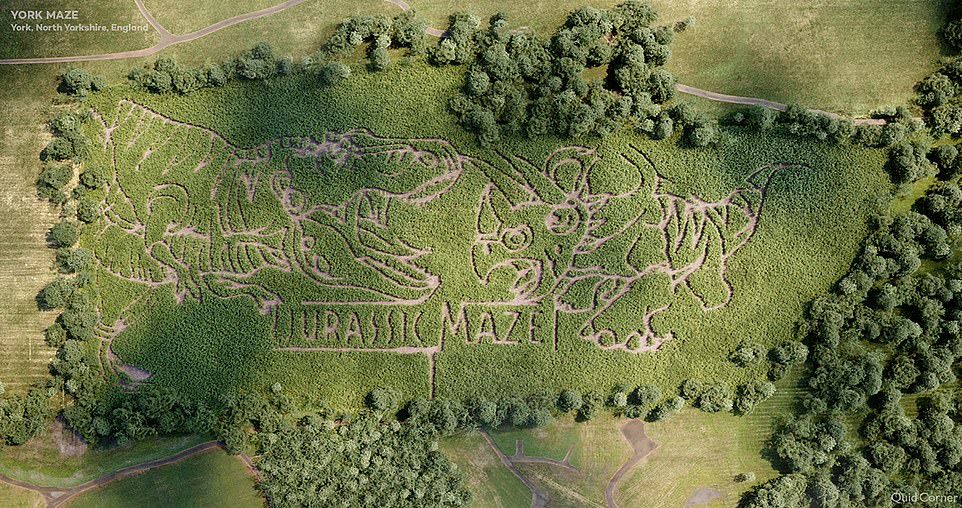 This terrifying maze in York spans two enormous dinosaurs – but can you find the best route to escape the jaws of the beast? 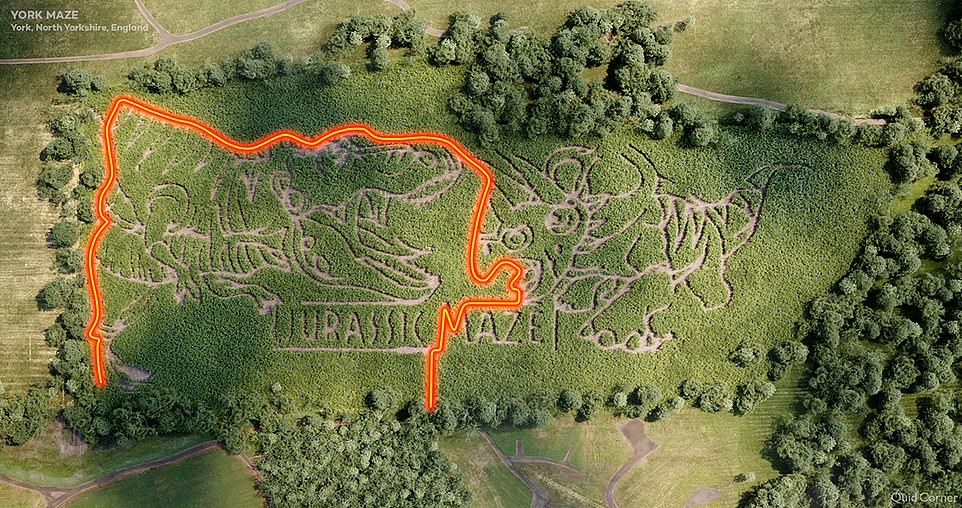 The maze is made completely out of corn, and has previously been shaped into Harry Potter and Doctor Who characters

And if a maze made out of corn-on-the-cob doesn’t already sound fiendish enough, regular visitors will note that the puzzle is completely redesigned every year with the appearance of the new crop.

Previous incarnations have included Harry Potter, Jurassic Park, and a Doctor Who maze in celebration of the show’s 50th anniversary.

For those desperate for more the company have put together a ‘mega maze’ of every labyrinth featured. 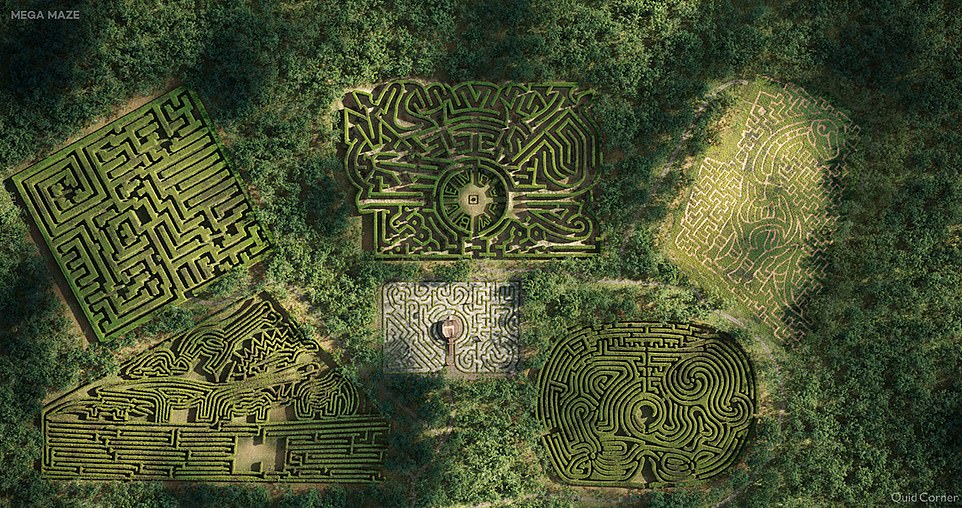 For anyone who still looking for more crazy maze fun, this ‘mega maze’ takes six of the most impressive labyrinths in the UK 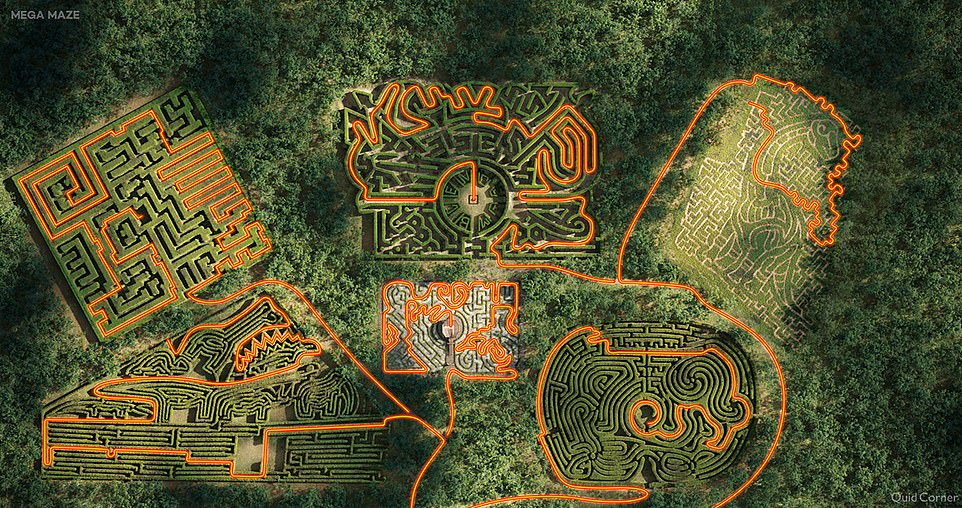 So how many of the mazes did you manage to solve? This megamaze route shows the most efficient way to get around all six one after another