Police investigating the allegation former Liberal staffer Brittany Higgins was raped by a colleague in Parliament House have handed a brief of evidence to prosecutors as the investigation reaches its final stages. 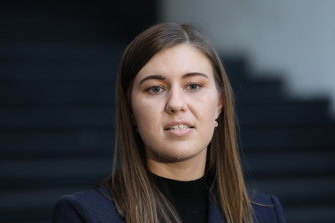 Former political staffer Brittany Higgins. A brief of evidence on her rape case has been handed to prosecutors.Credit:Dominic Lorrimer

The DPP has been asked to provide advice on whether to prosecute the man Ms Higgins alleges raped her inside Parliament House.

Ms Higgins alleges she was raped by a male colleague in the office of their boss, then-defence minister Linda Reynolds.

In a statement, Mr Drumgold said: “I confirm I have today received a partial brief of evidence, and a request to provide advice for consideration of prosecution.”

Australian Federal Police commissioner Reece Kershaw last month told a Senate estimates hearing the criminal investigation into Ms Higgins’ allegations was reaching its final stages and a brief of evidence was to be handed to the DPP in the coming weeks.

The AFP, which oversees ACT Policing, also revealed police have received reports about 19 incidents of possible misconduct involving federal MPs and their staff since Ms Higgins came forward in February with her allegation in February. It has referred 15 of the matters to state and territory police for further investigation.

Senator Reynolds, who is now Government Services Minister, last month confirmed she had given a statement to police about the alleged rape and was prepared to be interviewed if required.

A spokesman for ACT Policing said the investigation is ongoing.

“We don’t have any updates on it at this time.”