A bride-to-be who gave birth to her son ten weeks early and had to abandon her plans for a beachside wedding found a heartwarming way to incorporate her newborn baby into her ceremony.

North Carolina resident Amanda Withrow, 27, said ‘I do’ to Edwin Acevedo while holding their son Oliver Grey, who arrived suddenly when Amanda was just 30 weeks pregnant, and before the couple had time to get hitched as planned.

Seven weeks later, with their baby still being kept in doctor’s care, Amanda was able to walk down the aisle with Oliver after the couple moved their plans and got married at WakeMed Hospital in Raleigh, where their son is currently being cared for. 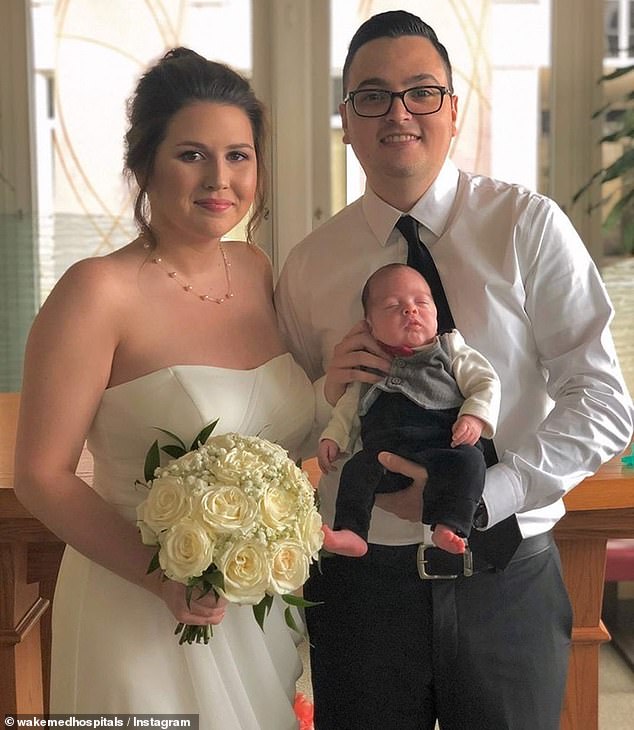 Happy family: Amanda Acevedo wed her husband Edwin canceled their initial wedding plans and said ‘I Do’ at the hospital with their premature baby Oliver in tow 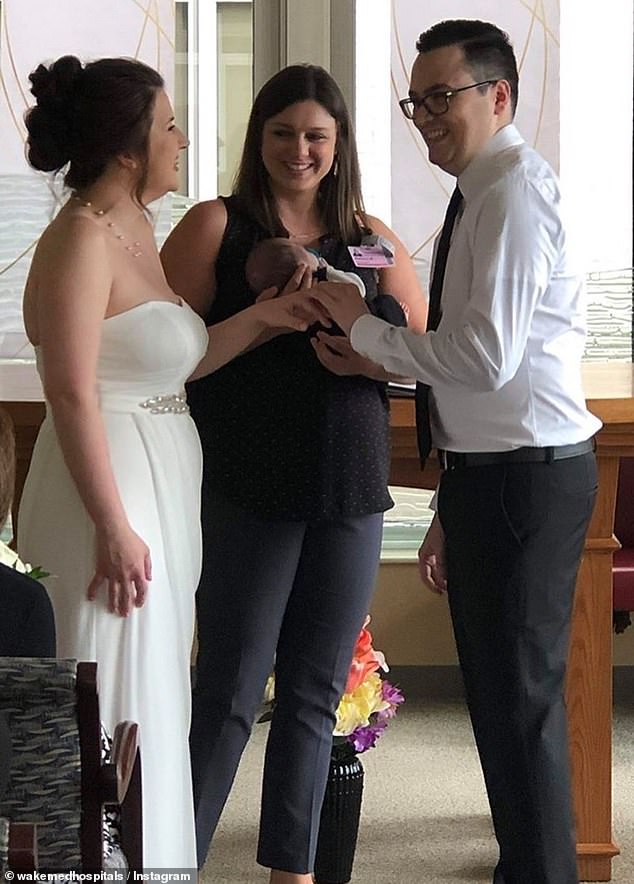 Chaplain: The hospital ceremony was the idea of Family Navigator and chaplain Mallory Magelli McKeown, center, who also officiated the couple’s marriage 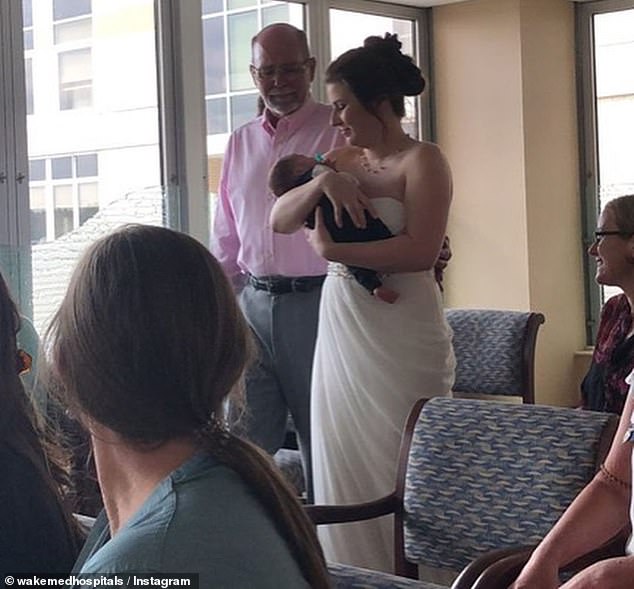 Emotional: There reportedly was ‘not a dry eye in the house’ as bride Amanda, pictured, walked the aisle with baby Oliver

Oliver arrived on June 14th, significantly before his August due date. According to Southern Living, the little one was only three pounds and measured a mere 17 inches.

On the day of the wedding seven weeks later, he weighed a healthy seven lbs and even wore a tiny suit to his parent’s wedding.

After giving birth, Amanda had told the hospital’s Family Navigator Mallory Magelli McKeown that she and Edwin would forgo the beach wedding and get married in a local courthouse. However, Mallory had another idea.

She suggested that the pair host their nuptials in the hospital so that their bundle of joy could be there too. The baby was, and still is, being monitored at the Neonatal Intensive Care Unit (NICU).

Mallory, who is also a chaplain, offered to officiate the ceremony, and nurses set about decorating the hospital chapel for the occasion.

The Wake County-based couple were joined for the wedding by the hospital staff and their families as Amanda carried Oliver down the aisle in lieu of a floral bouquet.

Neonatologist Dr Stephen DeMeo cleared Oliver’s journey from the NICU to the chapel on one condition: that the doctor could be there to witness it himself too.

‘There was not a dry eye in the chapel, and the room was filled with love and celebration for Amanda, Edwin and Oliver,’ a hospital spokesperson told Southern Living.

They added that Oliver is ‘happy and healthy’ and is on track to go home very soon. 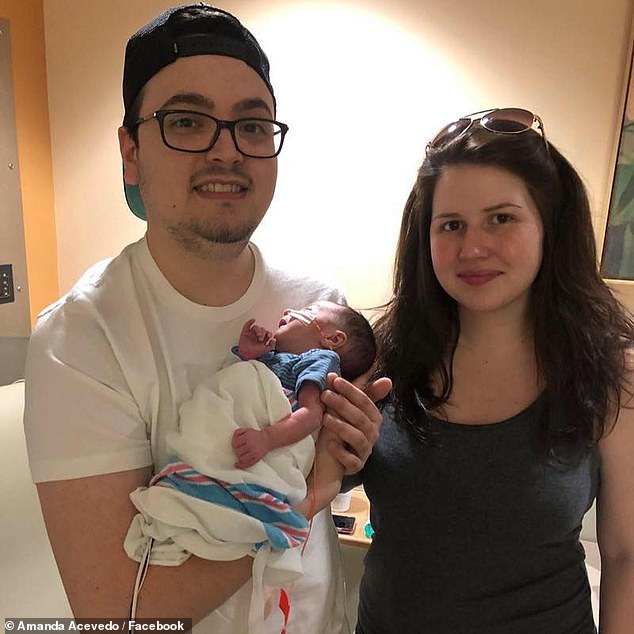 Parents: Edwin and Amanda pictured with Oliver in July when he was steadily getting stronger and healthier 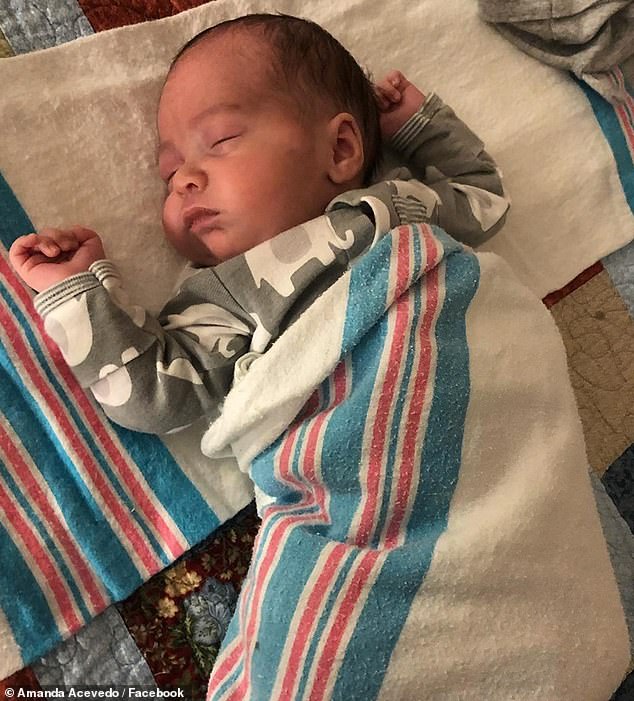 Newborn: Amanda said on Facebook that her precious baby, pictured, will be home soon 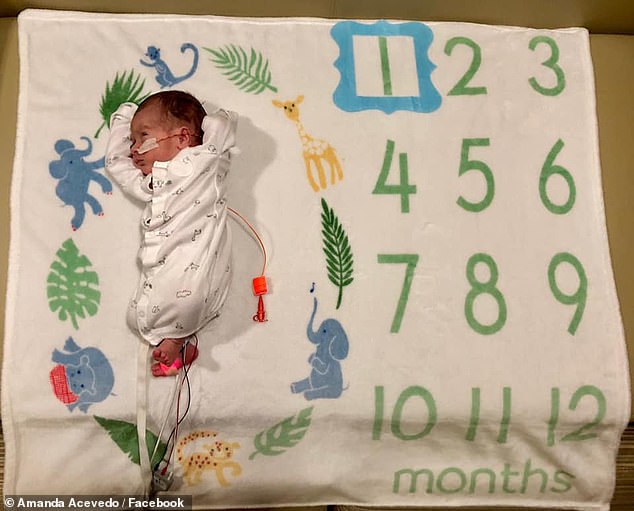 Petite: Oliver, pictured, was only three pounds when he was born at 30 weeks in June

‘Could not have asked for a more special or memorable wedding, surrounded by family and the wonderful people taking care of my baby!’ Amanda wrote on her Facebook page.

‘Thank you WakeMed Children’s for letting Oliver be a part of our day and everything else you do.’

The couple were inundated with well wishers on social media.

WakeMed shared the news and photos to Instagram, where comments flooded in from all over the US.

Several users also praised ‘amazing human’ Mallory for organizing the celebration for the new parents as they congratulated them.

Celebration: After the hospital shared the news of the wedding on Instagram, the post was flooded with comments from well wishers