“You had me at pepperoni!”

The two actors — who played on-screen love interests Cory Matthews and Topanga Lawrence in “Boy Meets World” as well as a spin-off — reunited for a Panera Bread commercial for the chain’s new flatbread pizzas. 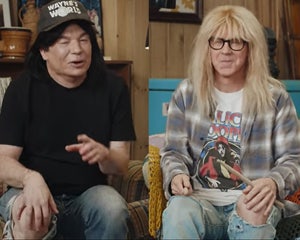 In the ad, which appeared to be in the form of a movie trailer for a film titled, “Forever Flatbreads,”  Savage and Fishel acted out altered versions of some famous moments from rom-coms, including “Sixteen Candles,” “Love Actually,” “When Harry Met Sally” and “Jerry MaGuire.”

The commercial opened to Savage and Fishel running into each other at Panera, with both of them ordering flatbread pizzas. After the two characters recognize one another, the ad cuts to a montage of romantic moments, which were filled with nods to rom-coms.

The clip’s reference to “Love Actually” features Savage holding up a pizza box outside the window of a Panera where Fishel was inside. While showing the box, Savage flashed signs that read: “You’re the Pizza…I never knew… I needed.”

The ad went on to feature more nods to romantic comedies, before concluding with a spin on a classic line from “Jerry MaGuire”. “You had me at pepperoni!” Fishel said to Savage and the two leaned in for a kiss.

Savage and Fishel both posted on Instagram and shared the ad, which was directed by Savage’s brother, Fred.

“@panerabread really knows the way to a girl’s heart! 😍 ,” Fishel wrote. “Had a blast reuniting with @bensavage over flatbread pizza.”

Savage and Fishel starred as Cory and Topanga on all seven seasons of “Boy Meets World,” which ran from 1993 to 2000. The two went on to reprise their characters, who married and became parents, in the Disney Channel spin-off “Girl Meets World” from 2014 to 2017.