This is how we meet bosom buddies Linda and her cousin Fanny in the television series The Pursuit of Love, which begins at nearly the point where the book ends. Then we sweep back to their childhood together, and we’re off on a dizzying and glorious three-part ride through the worlds of eccentric English aristocracy; the bright young things of the Twenties; disastrous marriages; war in Spain and Europe; and a love nest with a rich duke in Paris, all to a rollicking rock soundtrack. The elusive goal for this pair is love: in the world they live in, there’s really no alternative for any woman. 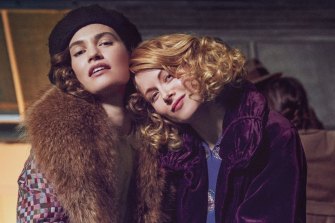 Lily James and Emily Beecham in the adaptation of Nancy Mitford’s The Pursuit of Love.Credit:Amazon Prime

If you’re enjoying the ride, courtesy of Amazon, you’re no doubt wondering whether to tackle the book. Nancy Mitford’s fifth novel The Pursuit of Love was published in 1945 and was an instant success, selling more than 200,000 copies within a year. Her biographer Selina Hastings called it “the perfect antidote to the long war years of hardship and austerity, providing the undernourished public with its favourite ingredients: love, childhood and the English upper classes”.

Seventy-six years later, are these still our favourite ingredients? Love is, for sure. The television series proves that, staying close to the original story and using many of Mitford’s best lines. So yes, you should definitely read The Pursuit of Love: it’s a wonderfully witty classic of romantic comedy. But be prepared for a few changes from what you saw on the screen. 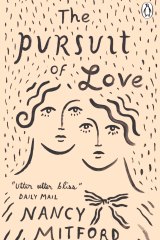 Should you read the book? It’s a resounding yes – but expect a few differences from the show. Credit:

The Linda and Fanny show

This is one area where the updated screenplay has improved on the original. Mitford’s novel is very much the Linda show. Fanny is the narrator, sturdily reliable and self-effacing, keeping our attention on Linda and her constant storm of emotions. But in the adaptation, their passionate friendship is the core of the story.

From childhood on, we see these girls devoted to each other in the most physical way. They hug and cuddle and roll around, often wearing nothing but bath towels. Indeed, the most enduring love affair in the story is between the two women. But it’s a platonic connection: their obsessive dreams of love always centre on men.

The most frustrating thing about Mitford’s story is that we never get a proper handle on Fanny: is she smug or repressed? The TV show reveals more. She’s insecure because her mother, nicknamed the Bolter, left her to run off with a new man, as is her habit.

The TV Fanny is allowed to feel possessive of Linda, resentful and jealous. Her marriage to the nice but dull Alfred is not the perfect match it seems. She wonders if flighty Linda’s incurably romantic streak makes for a better life: it’s certainly more exciting. “I’m lost without you,” cries Linda. “You always say that, but you always leave me,” says Fanny.

While the television show focuses on Fanny and Linda, Mitford’s novel is more of an ensemble piece. Linda is the heroine, but her family, friends and in-laws all have deliciously quirky and ghastly roles to play. We get telling glimpses of these folk on screen, brought to us by an excellent cast, but for the full experience we need the novel.

Brittle, sometimes cynical, always beguiling, Mitford’s genius is to write about dark times, tragic events, cruel behaviour and terrible people in an acerbic way that makes me laugh out loud. Some of her best chapters are about the childhood of Linda and her siblings under the tyrannical rule of her father, Fanny’s Uncle Matthew, who likes to send his bloodhounds out to hunt his children.

He’s a furious medieval-minded Philistine, outrageously racist, sexist and violent towards children; yet Mitford presents him as a comical figure who is oddly charming.

If you think Uncle Matthew’s mad and bad, you should meet the others. My favourite character is Lord Merlin. A rich aesthete who dyes pigeons bright colours and gives his greyhounds diamond collars, you expect him to be fey and weird; but he is often the only person who can talk any sense into Linda. 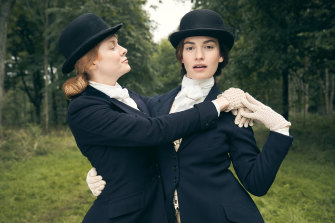 How true is it?

The Pursuit of Love is often described as an autobiographical or semi-autobiographical novel. Certainly the childhood chapters are true to the bizarre lives of the Mitford children with the real Uncle Matthew, the second Baron Redesdale.

Like Linda, Nancy Mitford was a rebellious and poorly educated child who grew into a woman with a tempestuous love life. She was engaged to Hamish Erskine, a homosexual, then married Peter Rodd, who turned out to be a feckless husband.

Like Linda, she worked to help Spanish refugees at the end of the Civil War, but she didn’t marry a Communist. That was her sister Jessica, who caused a huge scandal by eloping with her cousin Esmond Romilly. Sisters Diana and Unity notoriously went to the other extreme of politics. They were big fans of Hitler, and Diana married the English fascist leader Sir Oswald Mosley.

Again, like Linda, Nancy’s great love affair was with a Frenchman, Gaston Palewski, a hero of the Resistance. But the affair was not as idyllic as Linda’s: Palewski two-timed her with another mistress and expected her to put up with it.

But Nancy also fell in love with France and lived the last 30-odd years of her life there, writing novels and historical biographies.