The Ben Roberts-Smith defamation trial will be unable to resume next month as planned due to border closures in Western Australia and Queensland, which would prevent witnesses from returning home after they give evidence, a court has heard.

Mr Roberts-Smith, 42, is suing The Age and The Sydney Morning Herald in the Federal Court over series of stories published in 2018 which alleged he was involved in unlawful killings during missions in Afghanistan with the Special Air Service (SAS). 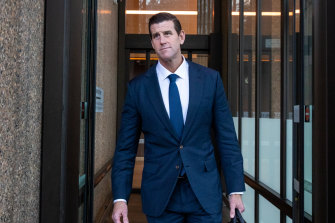 The former soldier has denied all wrongdoing, telling the court earlier this year that he only killed suspected Taliban insurgents during the heat of battle and it “breaks my heart” to be described as a murderer.

The news publications are relying on a defence of truth. The trial has already heard from four Afghan witnesses, one of whom said he saw a “big soldier” kick his uncle, Ali Jan, off a cliff in the village of Darwan before shots were heard.

On Friday, one of Mr Roberts-Smith’s barristers, Arthur Moses, SC, said there appears to be a “blanket refusal” on allowing West Australians to return to the state if they travel to Sydney, as several witnesses will have to.

He said he will apply to have the trial relocated to South Australia, which will have the lowest ramifications for the travel of witnesses, however the logistics of this are expected to take the Commonwealth up to 12 weeks to organise.

Mr Moses said the newspapers have suggested keeping the trial in Sydney, and adjourning it to February next year, but there was no guarantee that border restrictions would lift by then – even though WA Premier Mark McGowan has indicated restrictions in the state would lift by February, March or April.

“One really can’t rely on the public statements of any politician in order to make decisions as to when court hearings will be listed,” Mr Moses said. He said it would be an “extraordinary step” to adjourn the proceedings, which have to be brought to an end one way or another.

“We need to have a solution, not just keep raising the problem as to why the trial can’t come to an end,” Mr Moses said. “Otherwise it truly will be like Waiting for Godot, your honour, for this thing to finish.”

Nicholas Owens, SC, appearing for the newspapers, said the hearing cannot resume on November 1 as planned, as much as everyone would like it to, due to the restrictions in WA and Queensland.

He said his clients are open to any solution that will get their witnesses into court as soon as possible, but even if the trial was moved to Adelaide it would still not resume until early next year.

“The one thing that my clients desire most fervently above all is for the trial to recommence, and to be able to call witnesses in support of their truth defence,” Mr Owens said. “Despite what we all want, for the trial to resume as soon as possible, it can’t happen.”

Justice Anthony Besanko said it is “very unlikely” the trial will resume on November 1, but he would not make a formal order vacating that date at this stage.

An application to adjourn the trial to next year or move it to South Australia will be heard on October 15.