Gordon Ramsay is amazing source code. Since the Scottish chef-turned-television-terror debuted Ramsay’s Kitchen Nightmares on Britain’s Channel 4 in 2004, the reality format where the host visits a doomed restaurant and applies shock treatment to the failing proprietor, menu and staff has been duplicated more than 25 times. Nearly every country in Europe has a homegrown version, although the most famous successor is Ramsay’s own hit American edition, Fox’s Kitchen Nightmares. Debuting in 2007 and running for seven seasons, it accumulated untold decibels, expletives and spat-out food. 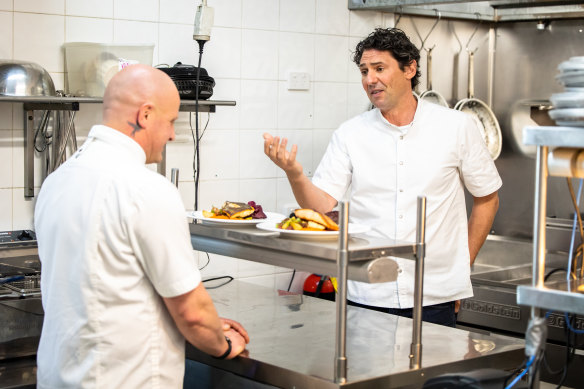 Colin Fassnidge makes a point in an episode of the local Kitchen Nightmares.Credit:Geoff Magee Photography

Australia is behind the times in cloning Ramsay’s caustic creation – France’s Cauchemar en cuisine has been airing since 2011 – but it’s understandable when you ask yourself this: who can host it? Fronting Kitchen Nightmares requires a confrontational poise. You’ve got to like a scrap enough that the audience enjoys your having one. Exasperated swearing, to convey frustration, helps as well. Reality TV stars who wear the black hat are a rarity in this country, which is why the gig finally went to the Irish-born chef and presenter Colin Fassnidge.

“If you live and die by your chips, then we just died,” declares Fassnidge, taste-testing the menu at a chaotic American diner in NSW’s Central Tablelands. On My Kitchen Rules Fassnidge presented as the cheeky bad boy, and he leans into that persona here. The show meets him halfway, serving up disastrous venues in the first two episodes with owners set in their ways; the second, running a cafe in the hills behind Queensland’s Sunshine Coast, has a distinct whiff of David Brent to him. Bombs away.

The eternal friction in Kitchen Nightmares is craft versus confrontation. Do you define and defuse the obvious failings, or just broadside the owner until they bite back? Ramsay himself favoured the former in Britain, the latter in America. Fassnidge’s iteration also likes a blunt review, peppered with beep-worthy interjections, although the narrative very quickly arrives at tears and welcome teachings. The American diner’s pugnacious boss Mumma Jo starts out rebuking Fassnidge, but soon becomes his disciple, even if that road to Damascus moment mostly happens overnight and off-camera.

Fassnidge is quick with a consoling hug, but the show’s attitude to kitchen culture is sometimes thoughtless. There are several scenes, for example, where Mumma Jo harangues her staff, which is presented without caution or commentary. The staff risk being cannon fodder, whether for Fassnidge or Mumma Jo. In another scene the assembled employees are told on camera that cost-cutting requires a reduction in their shifts and that if anyone objects they should speak up now. The scene has all the charm of a dictator demanding allegiance of his subordinates live on state TV.

Fassnidge has the knowledge and the inclination to try and right these culinary death spirals, and it’s fascinating to see him take practical steps. In the second episode he steps into a crumbling kitchen to get the orders moving and his actions are decisive and tone sharp. The first two episodes are frisky and watchable, but over an entire season the show risks becoming bluntly repetitive. The producers will need to have the confidence to vary the guests. How will Fassnidge fare with a kind-hearted failure, as opposed to a deluded overseer? Even Kitchen Nightmares needs a few good dreams.