A Commonwealth Bank loan officer has pleaded guilty to stealing $3.75 million which he blew on “a lot of” cocaine and a lavish lifestyle more than a decade after the bank failed to report his crime spree to police.

George Vrettakos, who was caught falsifying loan documentation by the CBA in 2010, went on to work at other financial institutions and the debt collection industry before his misconduct and the bank’s lack of action was exposed by The Age and The Sydney Morning Herald in 2018. 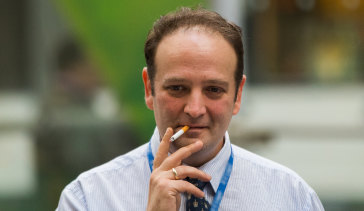 On Tuesday, the 41-year-old pleaded guilty to three charges of obtaining financial advantage by deception two months after being charged by Victoria Police’s fraud and extortion squad in December 2020.

The bank made the decision in 2010 not to report the $3.75 million theft despite Mr Vrettakos making full admissions at the time and offering to provide information implicating other members of staff.

Mr Vrettakos’ extensive mea culpa was documented in audio recordings of interviews with internal CBA security specialists, where the former mobile lender described how he ran the scam and spent the money.

Mr Vrettakos also claimed at the time that he was only one of many CBA employees who were engaged in misconduct in the home lending division.

“I’m not a rat and I was never gonna talk. But I’m not gonna sit there and cop it because, yes, I did wrong, but I wasn’t the only one. I was taught how to do it,” Mr Vrettakos said during a recorded interview with the bank’s security department.

Mr Vrettakos revealed to the CBA the ease with which insiders could circumvent the bank’s compliance and monitoring systems to generate false loan statistics and create fraudulent accounts linked to the property assets of real customers.

Instead of reporting the criminal conduct to Victoria Police, the bank quietly sacked Mr Vrettakos and tried to force him to repay the money in 2010.

The bank obtained a civil court order freezing Mr Vrettakos’ assets and he was forced to sign an agreement where he agreed to pay back $2 million of the allegedly stolen funds. The CBA did not report Mr Vrettakos to law enforcement authorities even after he defaulted on the deal.

The CBA has previously told The Age that Mr Vrettakos’ actions had no financial impact on any customers or third parties. “CBA incurred a financial loss as a result of this employee’s actions,” a spokesman said.

The bank only reported Mr Vretakkos to police in 2018 after The Age obtained copies of the interview recordings and other documents.

It remains unclear whether the bank has investigated the allegations raised by Mr Vrettakos or referred any other current or former staff to police.

Mr Vrettakos, who is on bail, returns to court in June.

At the end of each day, we’ll send you the most important breaking news headlines, evening entertainment ideas and a long read to enjoy.  Sign up here.