The Morrison government has refused to release the findings of its inquiry into the expenses culture at Australia Post which was triggered by revelations the former chief executive spent $20,000 of company money on Cartier watches for senior employees.

Communications Minister Paul Fletcher signalled on Monday the report would kept secret, despite indicating last month that it would be made public. 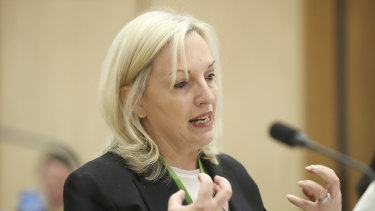 Christine Holgate giving evidence at Senate estimates in October, when she revealed her office had purchased Cartier watches for four employees.Credit:Alex Ellinghausen

In a brief statement, a spokesman for Mr Fletcher confirmed the government had "received and considered the investigation into Australia Post".

"Departments will now apply the lessons learned from the investigation to ensure that Australia Post and other Government Business Enterprises comply with their legislative obligations, reflect community expectations, and have appropriate internal systems in place in their use of public resources," the spokesman said.

Christine Holgate quit as Australia Post boss in November after giving evidence to a Senate inquiry that she had used her corporate credit card to purchase the luxury watches for four employees in 2018 as a reward for their work securing a major banking deal.

The revelations were seized upon by Prime Minister Scott Morrison who said in a fiery speech to the Parliament that he was "appalled and shocked" by the gifts.

The government subsequently commissioned the Finance and Communications departments to lead a four-week inquiry into the purchases, assisted by Maddocks law firm.

The inquiry was given an expanded remit to examine the broader governance arrangements and management culture at Australia Post. This included examining whether the Australia Post board, which includes several Liberal Party figures including former federal party director Tony Nutt, acted within their obligations as chief executive and directors and whether this was consistent with the "ethical expenditure of money and use of public resources".

In an interview with the ABC in November, Mr Fletcher said he expected the report would be made public "in due course" with some redactions, but said it was ultimately a matter for cabinet to decide.

"This non-response is pathetic and, just like the purchase of luxury Cartier watches, does not pass the pub test," Ms Rowland said.

"If the government does not think taxpayers deserve to know if their money has been wasted by Australia Post executives, then the Senate will need to take up the task."