The last time “Atlanta” was on the air — on May 10, 2018 — Donald Trump was still president, no one had heard of COVID and the show’s creator, Donald Glover, debuted as Lando Calrissian in “Solo: A Star Wars Story,” which was released later that month. If you can’t remember such a time, don’t worry: Neither can anyone else.

Season 3 of “Atlanta” — delayed at length by both Glover’s schedule and by the pandemic — is scheduled to premiere on FX on Thursday with two episodes (they’ll stream the next day on Hulu). And luckily, the show, which earned Glover acting and directing Emmy awards for its first season, filmed Seasons 3 and 4 back-to-back. Unluckily, Glover announced last month that the show’s fourth season — premiering in the fall — will be “Atlanta’s” last.

But none of those facts help you remember where the second season of “Atlanta” left off, so let’s get down to business now.

The second season of the show, “Atlanta Robbin’ Season” — so coined by Darius (LaKeith Stanfield) in Episode 1 as he surveys the aftermath of a deadly crime and says, “Robbin’ season: Christmas approaches, and everybody gotta eat” — veered inventively from the structure of the show’s first season. While there were certainly episodes in which the “Atlanta” ensemble of Earn (Glover), Alfred, aka Paper Boi (Brian Tyree Henry), Van (Zazie Beetz) and Darius were together in various combinations, the 11-episode season featured wildly imaginative episodes that broke any format “Atlanta” — or any show on television — ever had. In the fifth episode, “Barbershop,” for instance, Alfred just wants a haircut from his favorite barber, Bibby (Robert Powell III) — but instead gets taken all around the city on a wild adventure; it’s the tonal opposite of the also Alfred-focused “Woods” (Episode 8), when he escapes from being mugged, and ends up lost and alone in a forest, unable to get out. (Both episodes were written by Stefani Robinson.) In “Champagne Papi,” Van just wants to take a selfie with Drake after she’s broken up with Earn, but finds herself at an absurd New Year’s Eve party (no, Drake isn’t there — but there are two cardboard cut-outs of him for photos). And then there’s the indescribable “Teddy Perkins” — directed by “Atlanta” auteur Hiro Murai — in which Glover (wearing whiteface, and terrifying) plays the title character, who’s lured Darius to his mansion with the promise of a free piano in order to… well, it’s not quite clear, but not for anything good. “Teddy Perkins” is a rumination on childhood abuse, and on race as well as the presentation of race (think: Michael Jackson). It’s a 34-minute horror movie.

But the major theme of “Atlanta Robbin’ Season” is whether Earn can hack it as Alfred’s manager, and take his cousin’s rap career — which grows as the season goes on, almost despite Earn’s management — to where it needs to be. In “North of the Border,” the season’s ninth episode, Alfred all but tells Earn he’s about to fire him — a conversation brought about by yet another screw-up on Earn’s part.

Which brings us to “Crabs in a Barrel,” the Season 2 finale of “Atlanta,” directed by Murai and written by Stephen Glover, Donald’s brother. Here are six key things you need to remember in order to dive into the third season of the FX show. Though notably, and perhaps typically of “Atlanta” at this point, its season premiere does not pick up where the second season left off. But we’ll get there. 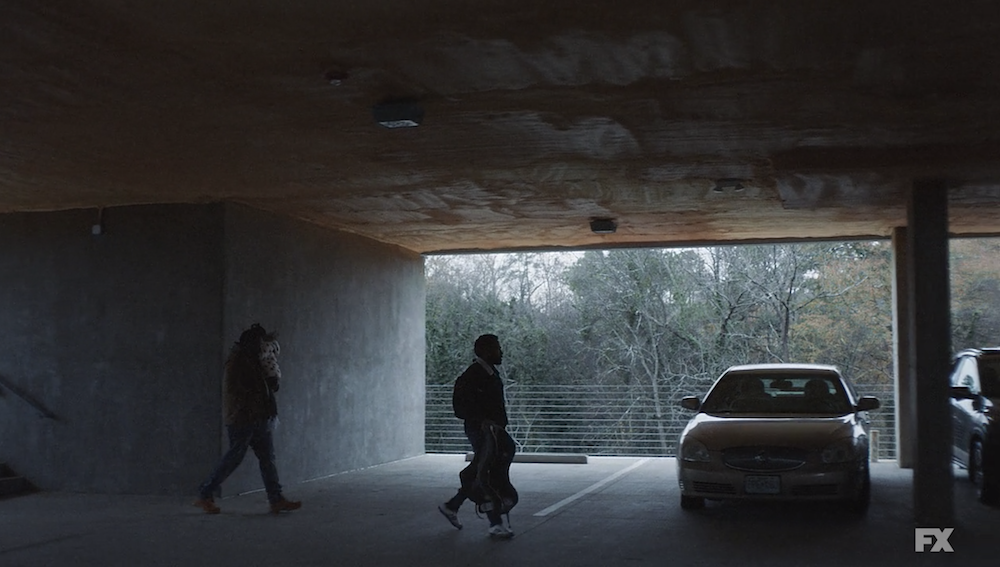 Things are quite tense between Earn and Alfred

Alfred, never the most effusive person, seems annoyed at Earn through his body language and speech. The two of them are searching for an entertainment lawyer for Alfred, and Earn not only arrives late to their meeting with a prospective one, but he’s brought Lottie (Mia Atehortua), his toddler. But Alfred doesn’t like this lawyer anyway — it turns him off that the guy represents just one other rapper, and has cast members from “Love and Hip-Hop: Atlanta” as clients. “Just find me, like, a big-level firm — Jewish dude,” Alfred orders Earn. They’re about to leave for a European tour, which Alfred credits to Luke (Matthew Barney), who manages rapper Clark County (RJ Wilson). Earn says awkwardly, “Yeah, but you should be headlining that tour.” Alfred responds pointedly: “I should be. But I ain’t.” 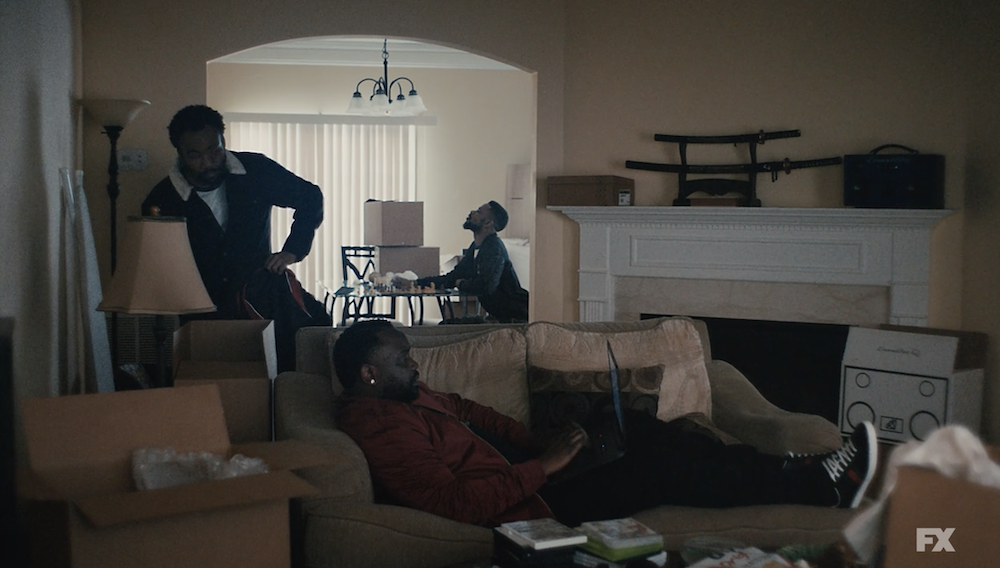 They’re leaving for Europe that night, and Earn is supervising Alfred and Darius’ move out of their house

The movers, who are drinking on the job, are not helping matters. As Earn looks around, Alfred points at a box with a golden gun in it — the gun Uncle Willie (Katt Williams) had handed over to Earn in the season premiere. Is it Chekov’s gun? Whatever it is, it’s going to go off. “You’re gonna jam me up,” Alfred says to Earn, who promises he’ll get rid of it.

Then Darius tells a stressed-out Earn that his passport has expired, but he knows a place where he can get one that day.

Earn and Van have no idea why they’ve been summoned there, and they’re nervous — but Lottie’s teacher (Greta Glenn) tells them that she’s an advanced little kid, to their relief. She says that Lottie should go to a private school for pre-K, one she’s spoken to a friend about, and has a “reasonable tuition,” she says. Earn and Van try to put it off, panicking at the idea of paying tuition, and ask whether Lottie can stay at the school she’s in now. “Stay here?” the teacher asks in horror. “No. This school is awful.” Earn asks if there’s anything they can do that would be cheaper. “Keep her in a happy, two-parent household,” the teacher replies. Oof.

They leave together, and Van confirms that Earn is leaving on tour for two months — adding that if Lottie does go to the private school, she’s going to need Earn to be more present. Van then says that she knew Lottie would be gifted. “You’re smart,” she says. “I figured some of it would get passed along, hopefully.” Earn says: “You’re smart too.” He says goodbye to Lottie, and emerges with tears in his eyes. 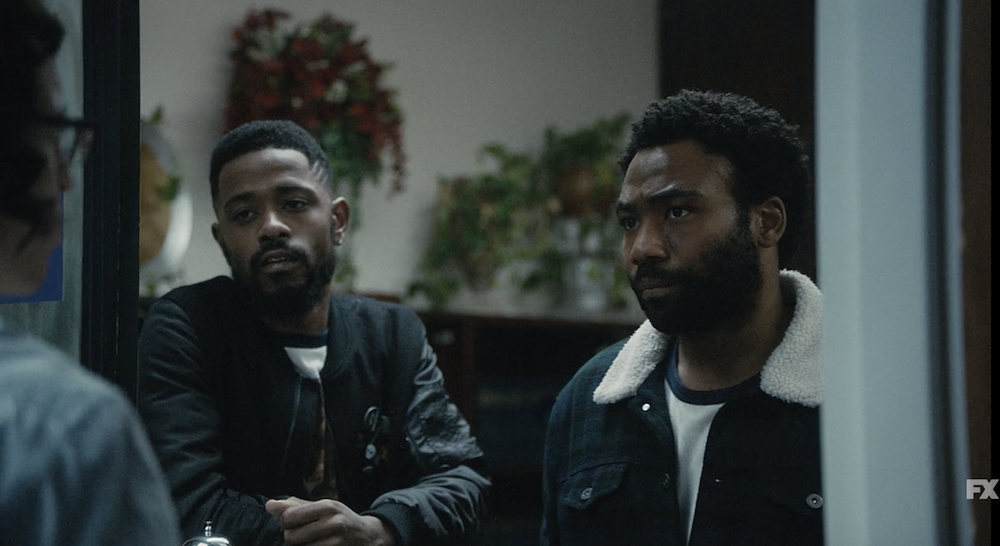 Earn and Darius are sitting in the rush-passport office, discussing the right way to pee, while surrounded by Orthodox Jewish men

They’re called up to a window, and the clerk (Daniel Annone) confirms that, yes, they can renew Darius’ passport in a few hours, much to Earn’s surprise. He asks whether they’re going on tour as part of a “rap entourage,” which also surprises Earn, who asks how he’s guessed. “We kind of have a specific clientele here, and rappers are procrastinators — no offense,” says the clerk. He’s heard of Paper Boi and Clark, and asks whether Al needs a lawyer: “My cousin is primo.” Earn asks him whether he thinks there are Black lawyers as good as his cousin. “There definitely is,” the clerk says carefully. “But part of being good at your job are your connections. And Black people just don’t have the connections that my cousin has — for systemic reasons.”

As they start to wait, Earn gets a text from Van saying she’s thinking of moving back to her mother’s house — with Lottie. It’s clear she has no faith in Earn at this point, and he sinks into a chair, absorbing the text. Earn asks Darius whether he thinks Alfred is going to fire him. “I don’t know,” Darius says. “Maybe.” Earn looks like he might cry, and says, “I know you’re always at peace with everything, but my whole world’s falling apart.” Darius tries to assure him by saying that if Alfred does fire him, he’ll do it in Europe so Earn can see the world. 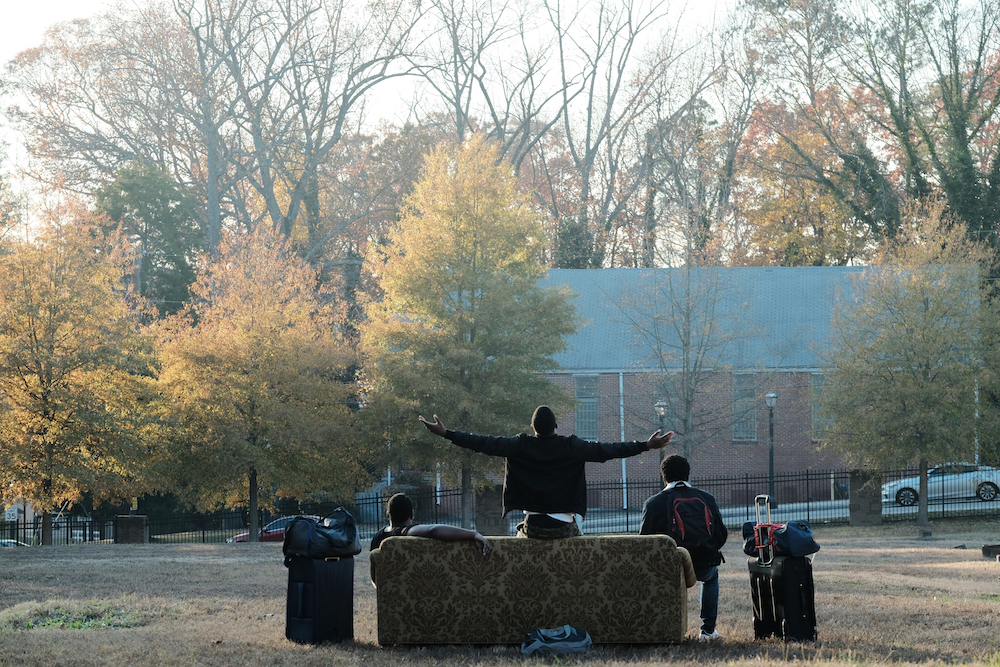 Back at home for the last time, they find Alfred on the couch in the field

Earn asks him if they can talk. “Let’s talk when we land, man,” Alfred replies, possibly confirming Darius’ theory. They head off to the airport, and we see them barely making it to security — where they run into Clark and Luke. Alfred hugs Luke, who says to him, “Did you check out that lawyer I sent you?” It’s a question that makes Earn wince — but he doesn’t know yet that he’s about to get his revenge, if inadvertently. 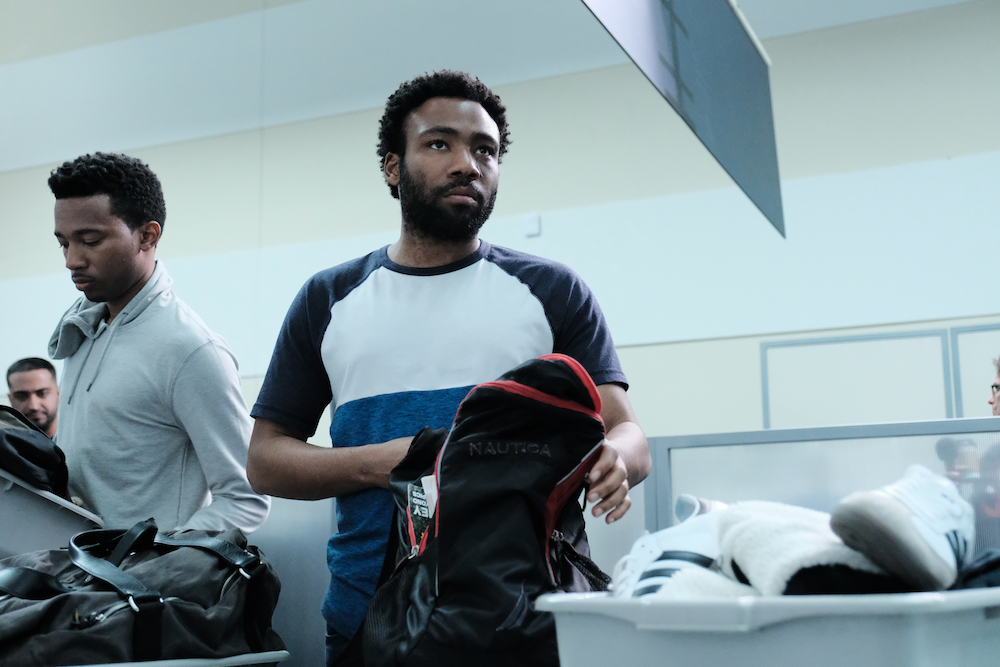 As they go through their bags at the TSA checkpoint, Earn opens his backpack only to see that he’s forgotten to get rid of the gun. Here, Murai mutes the sounds of the busy airport as Earn silently contemplates his options. He turns to Clark and Luke, and asks for a bin — and then we see that he’s gotten through security. “Whose bag is this?” yells a security guard behind them, but Earn doesn’t break stride.

As Alfred and Earn take their seats on the plane, Earn is slitty-eyed at the window seat. “I saw what you did,” Al says to him quietly. “At TSA. You ain’t gotta say shit.” Earn stares ahead, looking both half asleep and full of dread, bracing himself. Al continues: “You my family, Earn. You’re the only one that knows what I’m about. You give a fuck. I need that. Aight?” Earn nods.

Clark passes them as he heads to his seat: without Luke. “Luke got in some shit. Cops took him,” he says. Clark describes the golden gun, and Darius looks confused. Earn turns to Alfred, and says meaningfully, “The piece was in Clark’s bag.” Earn was trying to get Paper Boi that headlining spot after all — but instead, they both now know for a fact just how ambitious Clark is. As if there were any doubts.

This gun, “Atlanta” fans, has most certainly not gone off for the last time. 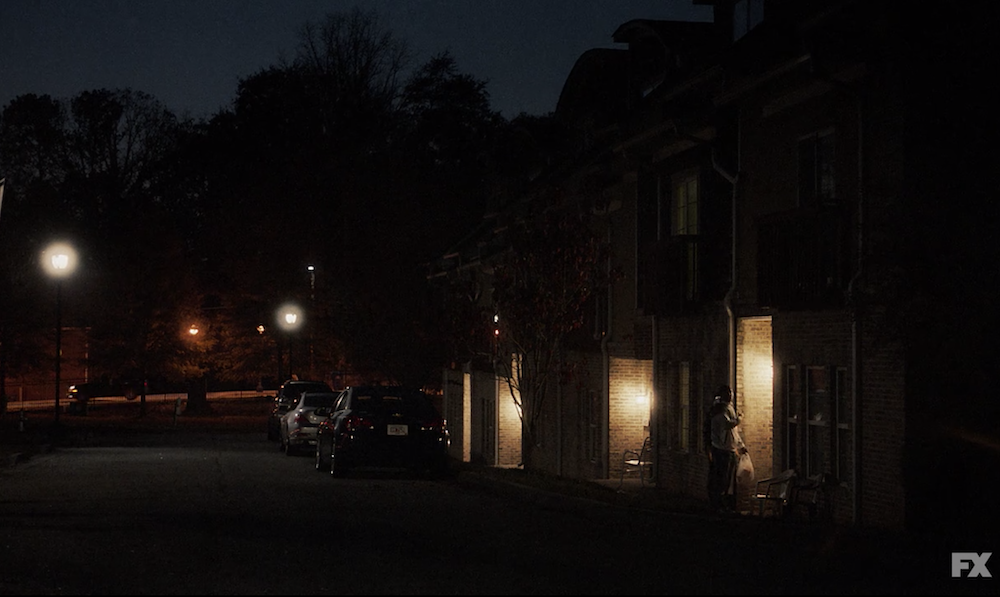 One last scene, though: poor Tracy

The sun has set on the couch, and we hear Tracy (Khris Davis) banging on the door — Tracy who’d beaten up Earn at Earn’s self-destructive behest in “North of the Border.”

Alfred didn’t even tell Tracy he was leaving. Or moving. Even though Earn had thought that Alfred had betrayed him in favor of Tracy, who was partially to blame for the comically disastrous events in that episode, Alfred has in fact chosen to stay loyal to his cousin and manager: Earn.