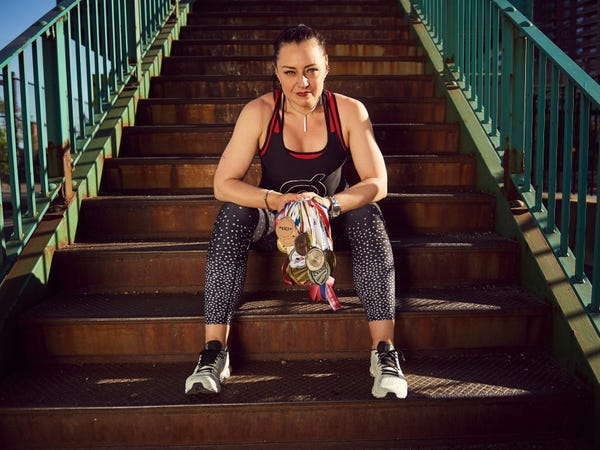 When Peloton instructor Christine D'Ercole was little, she wanted to be a ballerina.

But D'Ercole was never cast in recitals, and she eventually found out the reason why: "My thighs were twice the size of all the other little girls," D'Ercole told Insider. The realization, she said, was "devastating."

D'Ercole abandoned her ballet dreams because of the damaging messaging. But those strong thighs would later become the key to her success.

D'Ercole's path to success was neither linear nor easy

D'Ercole, 49, is one of Peloton's most popular instructors, and the only one who's a world and national track cycling champion. She's worn many hats over the years, all of which led her to where she is today. But the journey was far from a straight line.

After giving up her ballet aspirations, the young D'Ercole decided she would try acting, with her sights set on Broadway. She got into a performing arts high school and studied theater at Carnegie Mellon University in Pittsburgh.

While working an office job at the university around her studies, D'Ercole found her personal file. She knew she shouldn't, but she looked at it anyway.

"It said lovely things about my monologues," she said. "And at the bottom, it said, 'A little heavy in the thigh.'"

It was a massive blow, both for D'Ercole's self-confidence and her career aspirations. "My response to that was, 'Am I not built for any of my dreams?'" she said.

Not long after graduating, D'Ercole moved to New York. She got an agent and started auditioning, but became a bike messenger to pay the bills. (She also worked as a bartender, but she was fired for giving away too much free liquor.)

D'Ercole realized she had a natural talent when she and the other messengers raced around parks at the end of the day. "I would always win the sprints," she said.

But she had always loved cycling. "As a young teenager, I would go out on long bike rides and climb hills," she said. "I loved that rhythm of the body and pushing myself … I got [out] a lot of frustration there, and a lot of clarity."

Encouraged by her peers, D'Ercole started dabbling in track cycling and racing — and "absolutely fell in love."

Having failed to make much headway in acting, D'Ercole decided to pursue cycling.

Some of the other bike messengers were also racing cyclists, so they introduced her to the industry. Before she knew it, D'Ercole had a sponsorship deal with Nautica and was travelling across the US, racing with Olympians and world champions.

"I encourage people to listen to and follow their inklings, because if they link them together, they'll find their path," she said.

D'Ercole briefly gave up cycling after becoming a mom, but she couldn't deny her true calling

At the age of 27, D'Ercole became pregnant with her daughter. After gaining weight, the new mom decided she would become a plus-size model and got a job on the QVC network.

But this time, D'Ercole was deemed not big enough — she had to wear extra padding and could only model the fall/winter lines, which covered more of her body.

Before long, she realized she missed competitive cycling. She started racing again, but also qualified as an instructor, teaching spin classes at various studios.

D'Ercole has become one of Peloton's best loved instructors

In 2014, D'Ercole had been teaching at SoulCycle for a few years, but she knew the style wasn't quite the right fit for her.

And that's when Peloton came knocking.

Six years later, her classes are taken by thousands of Peloton members globally — her Power Zone rides have been taken over 750,000 times since January 2020.

D'Ercole's mission is to help people change the way they speak about themselves, both through her Peloton classes and her "Wordshops," which are workshops explaining how to realign your self-talk.

"And this turned into, 'I am, I can, I will, I do,' this little secret mantra of my own that I would repeat over and over," she said.

D'Ercole had been seeing the benefits of the mantra since 1996. But when she first said it in a spin class at Equinox in 2005, she was amazed by how well people responded. It's become her trademark.

"I am bigger than a smaller pair of pants."

D'Ercole believes her mantra is powerful because it's like a map: You can't know how to get to your destination if you don't already know where you are now.

"The most powerful thing anyone can say to us is what we say to ourselves," she said. "You can take a class and be inspired by 33 different instructors. You can read a book that someone mentioned on Instagram, see a billboard, read a sticky note … something will inspire you at some point.

"But inspiration is like a butterfly: It flies and it dies. And you can't harness it because it's not yours. When the words are yours, then you can make change."

It's something she uses in her own life, stretching all the way back to those damaging comments about her thighs.

"My self talk is about embracing where I am, not judging myself, and reminding myself that I am bigger than a smaller pair of pants."