Sydney Symphony Orchestra has posted its biggest surplus in more than a decade as some of the state’s leading arts companies defied predictions of financial peril to emerge from lockdown in the black. 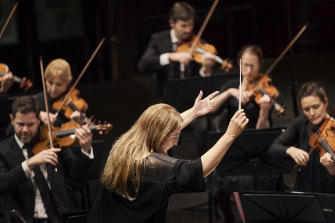 Simone Young will lead the Sydney Symphony Orchestra back to the Sydney Opera House in 2022.Credit:Nic Walker

Sydney Symphony Orchestra posted a $7.8 million surplus in 2020, its biggest since before the Global Financial Crisis, after a year in which it asked musicians and staff to take a collective $1.5 million pay cut and box office revenue plunged 92 per cent.

Belvoir St Theatre also posted a million-dollar surplus before depreciation but warned the arts sector recovery was fragile and easily undone by a COVID-19 third wave.

Disruptions to its 2020 season also proved an unexpected bonus for the SSO, which loses money each time it plays at the smaller Sydney Town Hall, its temporary home until the Concert Hall reopens next year. 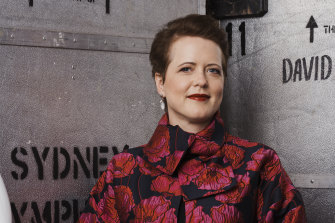 Defending its surplus, the SSO said it would be needed to deal with a looming deficit of $7.2 million projected for this year – not including Create NSW funding – and settle earlier deficits brought on by its forced move to the Town Hall.

It has pledged to return musicians and staff to full salary as soon as financially prudent and no later than the end of the year.

“Our recovery from venue dislocation and COVID-19 is a multi-year effort to keep the Orchestra artistically and financially intact and return successfully to the Sydney Opera House Concert Hall in February 2022,” Dunch said.

“COVID-19 continues to present challenges for this year and we’re not out of the woods yet. Our musicians, staff, board and government stakeholders are close partners in all of the joint decisions we are making to support the long-term sustainability of the orchestra.”

Last year SSO received $5 million from Create NSW to compensate for the $18.9 million costs of its exile from the Sydney Opera House. The remaining $5 million is expected in June. The SSO will launch its 2022 Concert Hall Reopening Season under new Chief Conductor Simone Young in August.

SSO chairman Terrey Arcus said the $3.8 million in bequests and gifts the company received in 2020 contributed to a one-time 57 per cent increase in philanthropic and sponsorship support, from $5.4 million to $8.5 million.

“Our 2022 expectations for returning to the Concert Hall are modest and
we anticipate that it will take some time to rebuild our audiences to their previous levels,” Mr Arcus said in his chairman’s letter accompanying the results.

COVID-19 forced Sydney Dance Company to cancel much of its season – 74 shows including two international tours and a national tour – and the organisation posted a $1.063 million operating surplus. Almost one-quarter of ticketholders owed a refund for cancelled dance performances donated the money back.

The $2.1 million it received from JobKeeper helped the company retain a full ensemble of 17 dancers and 82 staff including 36 casual dance teachers. All members of staff, including the executive team, took a wage cut.

Belvoir received just $401 in touring income, $974,000 from JobKeeper, and raised $2.6 million in donations and from fundraising helping to create 385 gigs for out-of-work artists.

It also instituted cost mitigation strategies including all staff going part-time for nearly six months as well as redundancies.

“We’ve been working hard to rebuild our reserves over the past few years to a level that protects us against future shocks such as COVID and this surplus is an important contribution to that objective,” Belvoir’s executive director Sue Donnelly said.

“Is Belvoir out of the woods? We don’t know. We now have more reserves and we’ve been assisted by Create NSW Recovery fund but at any minute if there are future outbreaks it could send us into a downward spiral. Really, until everyone is vaccinated we can’t be complacent. If there is a big outbreak and we have to close the theatre it will seriously impact our finances.”

Musica Viva Australia, which aims to enrich music in schools and the wider community, just broke even, a slim $75,274 surplus made possible by an injection of $1.5 million in government stimulus money.

Spokesperson Hywel Sims said Musica Viva was able to continue work through live and digital performances only because of the support from JobKeeper and other government programs which would allow Musica Viva to prepare for the uncertainties of 2021.

The organisation will be touring nationally in concert halls and schools throughout 2021 which meant 2021 would be as challenging as 2020 but in different ways.

“As we navigate health guidelines and border restrictions in different States and the continued closure of the international border it is clearly working in a COVID-conscious world will impact on all our audiences and income for some time to come. The board, management team, artists, and staff are working hard to ensure positive outcomes in an unpredictable year.”