AN AMERICAN IN PARIS

An American in Paris, the stage musical, has got it all. Powered by dance, it is a love story set in a romantic city with glorious music, witty dialogue, a touch of drama and a happy ending – for the main characters anyway. 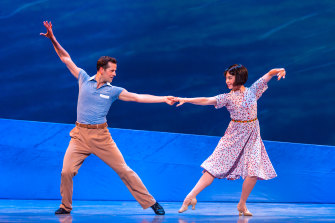 Robbie Fairchild and Leanne Cope in An American in Paris.Credit:Darren Thomas

And this Australian production makes the most of these assets with high-quality performances and presentation that lift you into another world for a precious two hours and 20 minutes.

The Gershwin Brothers, George and Ira, wrote the memorable songs: I Got Rhythm, The Man I Love, ’S Wonderful and so many more. They wrap you up in sound and energy, delivered by a feisty cast and an eloquent band directed by Vanessa Scammell.

For this production, inspired by the 1951 film, direction and choreography were handed to the English-born, international choreographer Christopher Wheeldon. While he is a product of Britain’s Royal Ballet, his skills extend to all kinds of dance, including a big tap number for those who might think fondly of the original. 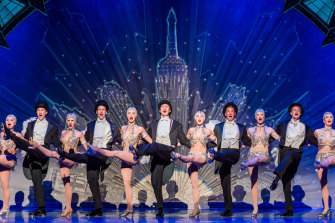 Chorus line in An American in Paris.Credit:Darren Thomas

In Robbie Fairchild, as the central character Jerry, he has a magical dancer. This is a man who can walk across the stage like an ordinary human – then suddenly take off in the lightest, fastest steps that have him practically floating. He can also sing and act, and in a bit of a ballet joke, he leaps around the stage almost at the end in a series of aerial acrobatics you might see from the prince in Swan Lake.

As Lise, the girl he falls in love with, Leanne Cope doesn’t equal his starry presence, but she dances well. Jonathan Hickey and Sam Ward as friends Adam and Henri, are outstanding in their characterisations as well as their singing and dancing. The same goes for Anne Wood as the crusty Madame Baurel and Ashleigh Rubenach as the bossy heiress, Milo.

But the power of the piece eventually comes down to the quality of the show as a whole. The ensemble, with the women in ever-changing costumes from full-skirted frocks to showgirl sparkles, makes its way through social dances heightened for the theatre via balletic gestures here and there, to contemporary dance – though oddly the concluding “ballet”, a key element of the story, was the weakest dance point of the night.

Imaginative sets by Bob Crowley are a mix of digital and actual, swiftly moved by the cast. They are lightheartedly atmospheric as they transport the audience from Paris streets and a bird’s eye view of the Seine, complete with boats, to Bohemian bars, posh art galleries and grand apartments.

This American in Paris is, without doubt, a delight.