Frumpy Emma is a sexual cliché who betrays the liberated women of my generation: As debate rages over onscreen passion, AMANDA PLATELL says older women still have sex… and without having to pay for it

When 63-year-old Emma Thompson revealed that she would be appearing naked — full-frontal and with no filters — in her new film, I, like many women of her generation, thought: ‘Good on you, girl!’

What a brave and empowering decision by one of our leading actresses. Yes, she can be annoyingly luvvie and overly woke at times, but here she was playing it for real and baring all in Good Luck To You, Leo Grande, the tale of a frustrated, older woman discovering her sexual awakening with a much younger man.

I couldn’t wait to see it … And now I have — but what a disappointment.

The lover chosen by Emma’s character Nancy (though this is not her real name) happens to be an upmarket escort — played by the utterly gorgeous twentysomething Irish actor Daryl McCormack. 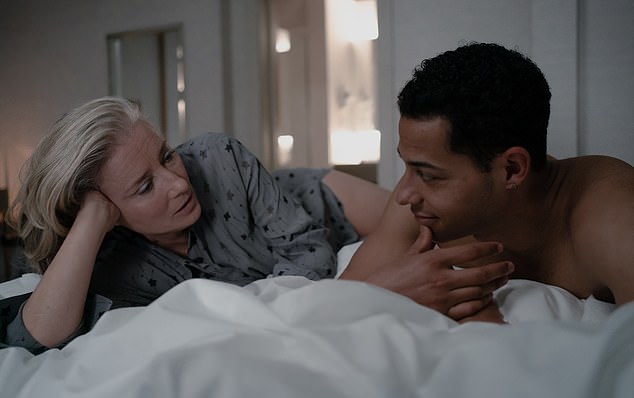 Nancy (Emma Thompson) and upmarket escort Leo (Daryl McCormack) in Good Luck To You, Leo Grande – the tale of a frustrated, older woman discovering her sexual awakening with a much younger man

No prude, me, but even I draw the line at hiring a male hooker — and I do not know of a single woman of my vintage who has.

Why would we, when there are plenty of younger men out there more than happy to squire older women, perhaps not for ever, but for fun? Then again, fun is something that has passed Nancy by. She’s a 55-year-old retired religious education teacher whose life has been one of duty and emotional repression.

For Nancy, physical intimacy involved her in her nightie, her husband shedding his clothes before jumping on her in the marital bed, followed by a perfunctionary coupling. The missionary position, of course. Sex was a chore rather than a joy.

So, following her husband’s death, Nancy decides to ‘see what all the fuss is about’ when it comes to sex and signs up to an escort website. She then forks out hundreds of pounds for a couple of hours with Leo Grande in a two-star hotel room in Norwich, which rather made me smile (shades of Alan Partridge?). 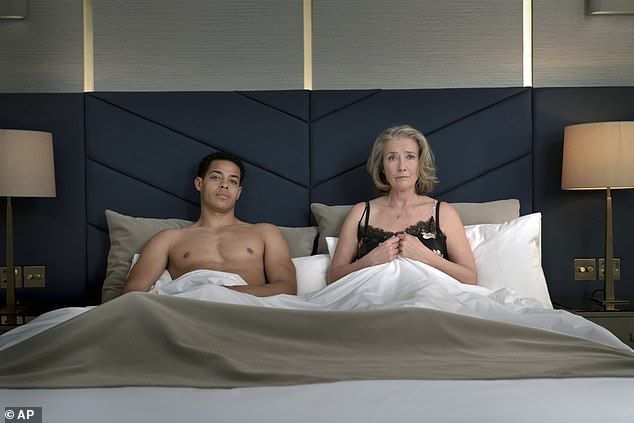 ‘What infuriated me most about this risible film is the clichéd portrayal of Nancy, who, with her badly cut, half-dyed hair and outdated attire, is frumpiness personified’

Her investment certainly pays off. Having waited decades for an orgasm, rather like buses, two come at once. And then many more.

Nancy gets to experience oral sex for the first time in her life, which, she admits to Leo, has long been a fantasy of hers but her husband felt it was demeaning. I found it an uncomfortable and unconvincing scene.

Ultimately, Nancy tries out every sexual position on her bucket list, including the face-off, the G-whiz and the wheelbarrow. (Yes, I had to Google some of them!)

Indeed, in a very short space of time, it seems that Nancy and Leo work their way through the Kama Sutra — which is all well and good, but it left me wondering how on earth this film got a 15 rating.

Swearing (their conversation is littered like confetti with f**k) and the unsizzling but explicit sex aside, the final scene has Nancy discarding her dressing gown, stroking her body in front of a full-length mirror.

The message is that, thanks to Leo, she feels beautiful at last. But it is surely not something that many parents would want their teenager watching.

What infuriated me most about this risible film is the clichéd portrayal of Nancy, who, with her badly cut, half-dyed hair and outdated attire, is frumpiness personified.

For her first encounter with Leo, Nancy opts for a drab brown skirt suit, brogues and what looked like a 100 per cent polyester patterned blouse worn over underwear that no woman would be seen dead in. 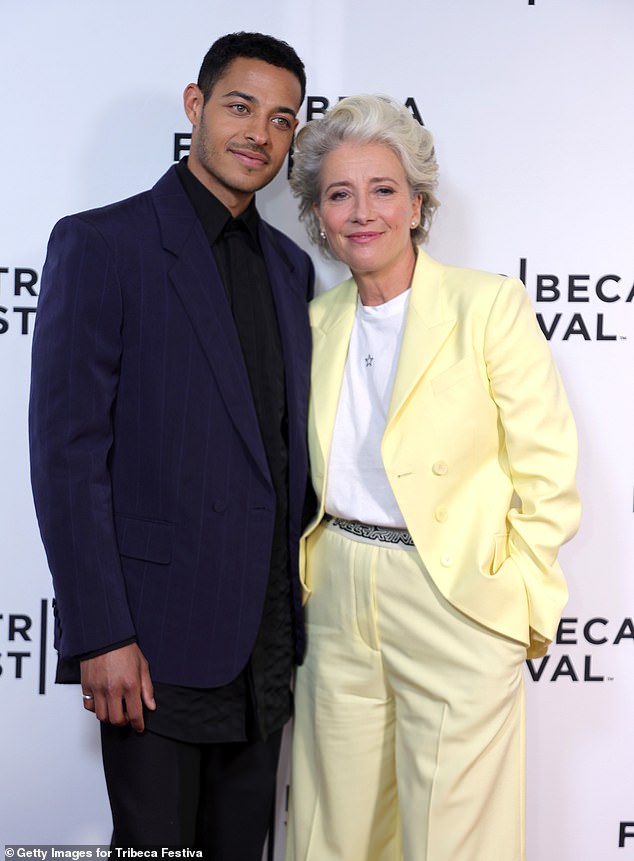 What is worse is her endless moaning — and not in a good way — about her dreary life, boring marriage and unfulfilling career.

It was never a passionate marriage, she confides to poor Leo (who really earns his fee listening to the diatribe of woe), more like ‘the bottom tray of the Aga’ where you put things to keep them warm.

That is, I admit, one of the few good jokes in the script.

Another is Leo’s response to Nancy’s whingeing about her lack of sexual fulfilment: ‘It’s an orgasm, Nancy, not a Fabergé egg. People have them all the time.’

Nancy loathes her body, her droopy breasts, fat legs and middle-age tummy. She despairs of seeing her peers ‘shrivelling’ and disappearing before her eyes with age and regret.

‘All women over 40 feel invisible and hate their bodies,’ Emma Thompson proclaimed in an interview to promote the film.

Well, Emma, I beg to differ. Your portrayal of a 21st century fifty-something is deeply flawed.

Nancy represents a breed of women born in the 1930s or 1940s, not the Fifties — the decade that you and I were conceived in. Those women were usually virgins when they married and their husbands would, most likely, be their only sexual partner.

For you and I, Emma, surveys suggest we have had between two to four sexual partners at least before we marry.

And with half of marriages in our generation ending in divorce, many of us have experienced life as single mid-life women.

So by the time we reach our 60s, I would argue that our number of lovers may be approaching double digits for many women.

Nor do we all despise our bodies. My girlfriends and I may wish our breasts still had the pertness of our twenty-something selves, but we diet, we exercise, we avail ourself of beauty ‘tweakments’ and more.

We love and follow fashion, and we buy sexy lingerie — not the long-line beige bras and thick American Tan tights Nancy favours. And certainly not when we’re anticipating a night of passion. Which, Emma, we still have — and without having to pay for it.

Recently, I shed a small tear when consigning to the rubbish bin a fabulous La Perla black basque that I’d worn in my 50s, and which now would barely fit around one of my thighs.

But I was happy that I’d once worn it with great joy.

Women like me don’t feel miserable or invisible. Many of us are still working well into our 60s, in jobs we love, and rejoicing that the world increasingly embraces our wisdom. We’re not all suffering a post-menopausal mid-life crisis; just a midriff one at times.

And for the record, Emma, I’ve just bought another black basque, albeit in a larger size. It was certainly cheaper than a male escort.