The ALP has pulled in the big party names in the dying days of the election campaign to support Melton’s Labor MP Steve McGhie in the target seat, just as the powerful United Firefighters Union (UFU) begins a mega offensive to back independent Dr Ian Birchall. 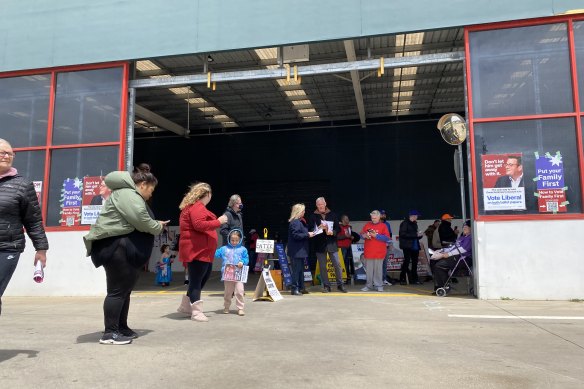 Melton, a satellite city 45 kilometres west of Melbourne’s CBD, is considered a “canary in the coal mine” of sorts for traditional Labor seats in Melbourne’s west, where the huge population growth over the past decade has put a strain on roads, transport, hospitals and schools.

On Tuesday, as early voters trickled through the early voting centre, a fire truck emblazoned with anti-Labor slogans was parked outside. UFU Secretary Peter Marshall said Melton was one of a number of target seats in the west where the union was deploying resources to back independents to hurt Labor this weekend, including Dr Joe Garra in Werribee, Brimbank councillor Virginia Tachos in St Albans, and Paul Hopper in Werribee. 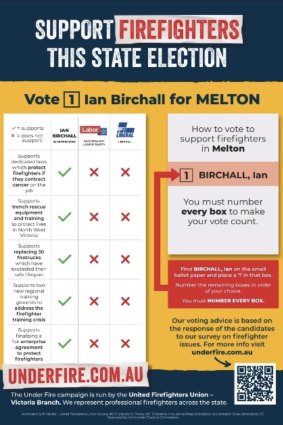 “Every household in Melton received a direct mail-out from us yesterday, and we’re meeting tomorrow to plan where to deploy people on Saturday,” Marshall told The Age.

The backing from the union, which is spending more than $200,000 on target seats, is a significant intervention for Birchall’s campaign. The local brain scientist has campaigned hard on Labor’s “neglect” of infrastructure in the area, but his politicking in recent days has raised eyebrows in Melton.

Birchall’s how-to-vote cards handed out at early voting centres last week put Liberal candidate Graham Watt at number 11, above Labor’s Steve McGhie at number 13. However, at the weekend, a how-to-vote card appeared on the official VEC website showing Birchall had put McGhie above the Liberals.

By Monday his card had changed back to having the Liberals ahead.

Quizzed on Monday about the backflip, Birchall said he had initially thought that in the event he didn’t win, having a Labor member in the seat would at least deliver infrastructure in Melton, albeit more slowly.

“I swapped initially because I thought having more of the same of what we’ve got, although developing slowly, was better than having a lame duck liberal in there who can’t do anything [in the event of a Labor government],” he said. 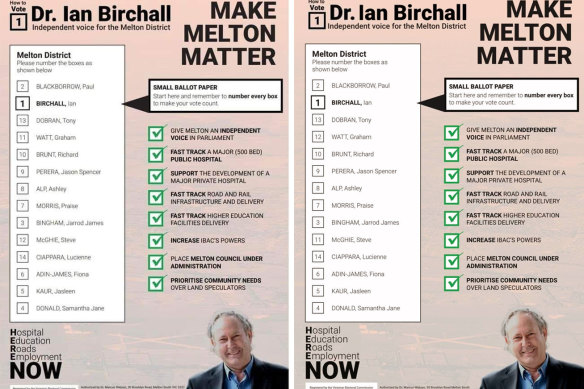 Before and after: Dr Ian Birchall’s preference backflip on where to place Liberal’s Graham Watt and Labor’s Steve McGhie.

Birchall also said he had offered to preference Labor or Liberals higher if they were willing to up the size and speed of their commitment to the new Melton Hospital, but neither side responded.

Meanwhile, late independent contender and local snake catcher Jarrod Bingham has made a deal with the Liberals to place the party in the number two spot on his how-to-vote cards.

“Hardly independent in my eyes,” said Birchall on Tuesday.

The Deputy Premier and Higher Education Minister Gayle Tierney joined the frontline in Melton on Tuesday, amid a growing sea of anti-Labor and anti-Andrews material from multiple parties.

Voters continued to turn up in droves to Melton’s two early voting centres to cast their vote on Tuesday, as polling revealed the major parties were neck-and-neck on primary votes as those surveyed significantly cut their support for the Labor government.

Couple Fiona and Christian Ferris said they were tossing up between Labor and independent Jarrod Bingham in the lead-up to voting on Tuesday. They ultimately placed Bingham first and Labor second.

“We actually had a conversation about politics five minutes ago, but that was about it,” said Fiona. 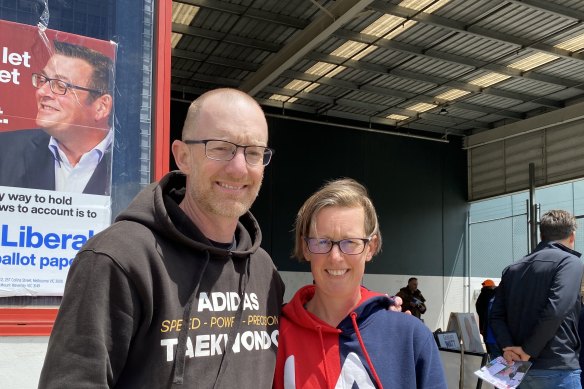 Christian and Fiona Ferris at an early voting centre in Melton on Tuesday.Credit:Rachael Dexter

“I went with Jarrod because we’ve seen him a few years ago at another polling booth and he was quite funny,” said Christian. “And then Steve [second] because he supports my local sporting club.”

Another couple, Dolma and Dean Thornton, said they had previously voted Labor but had placed Liberal candidate Graham Watt in the top spot due to his party’s promise to start the hospital a year earlier than Labor. The couple, who are both nurses, had read all the election pamphlets sent to their homes and attended candidates’ barbeques.

“I didn’t hear Melton get mentioned in Labor’s last ad campaigns about hospitals, and I was just shocked about it. I thought, ‘I hope we’re not going to get forgotten because I really want to work there one day’,” said Dean. 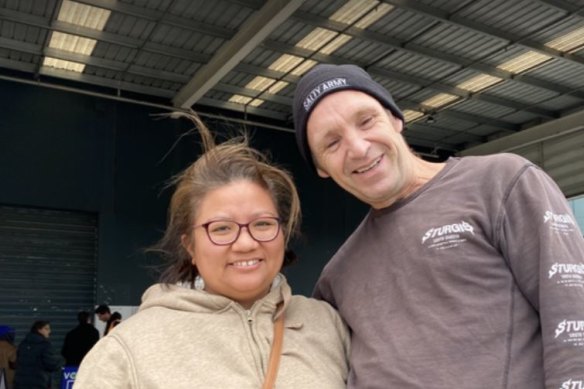 This story is part of our in-depth local coverage of the key seats of Melton, Hawthorn and Richmond at the November state election.