A senior Reserve Bank official has been given one of the nation’s most intriguing jobs – being sent to London to check the bank’s 80-tonne store of gold is still sitting in vaults beneath the Bank of England.

RBA assistant governor Christopher Kent on Wednesday revealed the official was about to “hop on a plane” to check over the holding of about 6400 bars of the precious metal that is worth more than $6 billion. 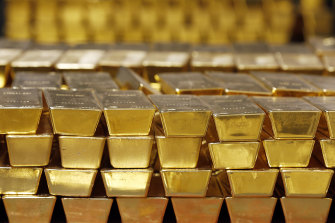 The Reserve Bank is about to audit its $6 billion gold holding stored beneath the Bank of England.Credit:AP

The Bank of England holds a large proportion of the world’s gold as it is the centre of the world gold trade. The RBA’s 6400 bars sit alongside another 400,000 that are located in special vaults that have been in use for centuries.

Under questioning from LNP senator Gerard Rennick, Dr Kent said the official sent to London would conduct an audit of about 10 per cent of the RBA’s holdings.

“It’s quite an intensive process. It’s quite well considered in terms of selecting the gold bars,” he said.

The Bank of England will be asked to produce some of the bars, but the RBA will not giving the bank a head’s up as to which bars it wants to see. The audit includes checking serial numbers to ensure they match what the RBA is supposed to hold.

About 10 per cent of Australia’s holding will be checked in the audit. Dr Kent noted this was at the upper level for a Bank of England gold audit.

The Bank of England has to make good any “lost” gold if the audit reveals less than the full 80 tonnes.

The Reserve physically audits its London gold holdings about every 6 years.

Former deputy Reserve Bank governor Guy Debelle noted two years ago that the gold was rarely moved due to the threat of losing small flakes of the metal.

But Senator Rennick said he had been contacted by several people saying it was untrue that gold “flaked”.