DAVID MELLOR: A German MEP said that it’s time the EU ‘showed its weapons’. Wow! Did his forebears use such sorry rhetoric in the Thirties?

As a 71-year-old, I was invited for my Covid vaccination a fortnight ago. I accepted with alacrity and was given an armful of potentially life-saving fluid – as well as complimentary chocolate – at Queen Mary University in London’s East End.

The doctor advised that I would be called back for the second jab within 12 weeks. Great, I said. What could possibly go wrong?

Having totally messed up its own vaccine procurement and rollout – 12 per cent of Brits have been vaccinated so far, against two per cent of EU citizens – Brussels has turned nasty. 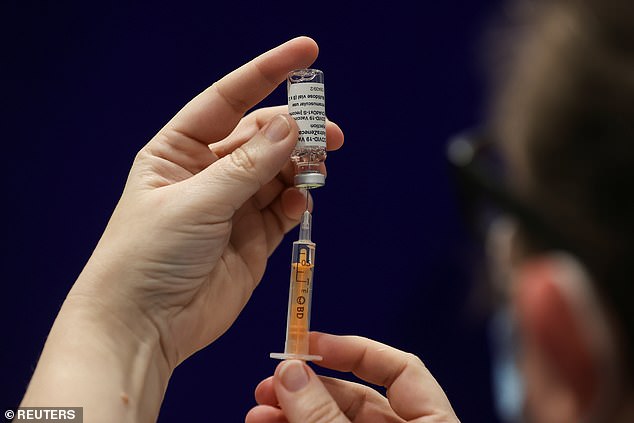 We had already agreed contracts for the full range of jabs under development by the middle of last year, three months before the EU signed up to anything. Pictured: A health worker draws a dose of the AstraZeneca vaccine in Newcastle upon Tyne

On Friday, it threatened to confiscate Pfizer/BioNTech vaccines bought by the Government by setting up a mechanism to block exports here. This was an interference with a lawful contract that is not permitted in civilised jurisdictions.

Thanks to our Government’s Vaccine Taskforce, presided over by the redoubtable Kate Bingham, we were quick off the mark for once.

We had already agreed contracts for the full range of jabs under development by the middle of last year, three months before the EU signed up to anything.

Britain did this by acting alone.

In contrast, Brussels insisted on moving slowly and collectively, employing the rickety old procurement machinery that had failed before, and, inevitably, failed again.

And now that they are getting a kicking, senior European politicians are mad as hell and determined to do us down. Even if that means driving a coach and horses through our contractual arrangements.

The German president of the EU Commission, Ursula von der Leyen, claimed the EU contracts with AstraZeneca, which is making the Oxford vaccine, were clear-cut and had to be delivered on.

Even if that meant taking a share of production already destined for the UK.

Not the EU. Its leaders immediately announced that exports of vaccines, even those contracted for by other countries such as the UK, would from today require permission of the host country to be carried out.

You don’t need a vivid imagination to appreciate that such permission might not be granted. And that draconian confiscations would ensue.

Who needs a court when you’ve got a Valkyrie in charge like Ursula?

It was a grotesque over-reaction and an illegal one. But then this crisis is a desperate matter for the EU and Frau von der Leyen.

They fear not only the angry reaction to the lives wasted by their long-winded, botched procurement, but also the damage caused to the very future of the bloc.

Hungary has already broken ranks with the other member nations, describing the EU delays as a scandal and negotiating private deals for Russian and Chinese jabs behind the backs of a horrified Commission.

The coming months bring a series of regional and parliamentary elections across Europe, when the displeasure of vaccine-deprived voters is likely to be felt in full.

And now, with French president Emmanuel Macron running neck-and-neck in polls with the neo-fascist Marine Le Pen, the patriotism card has been played – in characteristically despicable terms.

Macron has no basis at all to claim, as he did on Friday, that the (British) AstraZeneca jab ‘doesn’t work as expected’ and appears to be ‘quasi-ineffective’ in over-65s. 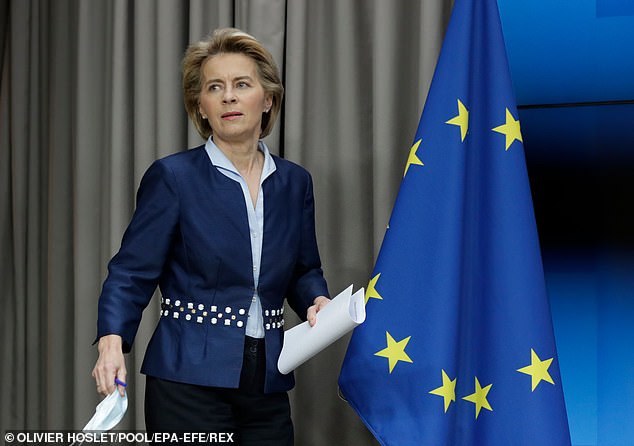 The German president of the EU Commission, Ursula von der Leyen, claimed the EU contracts with AstraZeneca were clear-cut and had to be delivered on 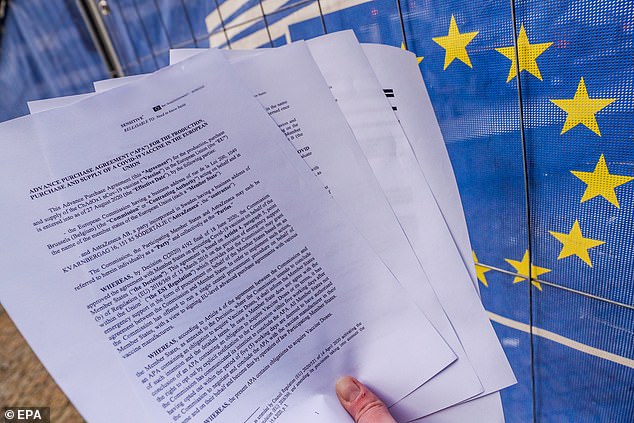 He does, though, have every interest in suppressing demand for a commercial rival to France’s Sanofi vaccine. And how much the better for him if he wounds recalcitrant Britain in the process?

The French contribution to this mess – and pretty much every European mess – has been predictable.

Following the national humiliation of the Pasteur Institute having to abandon its main coronavirus vaccine after disappointing test results, the French dragged Sanofi into the EU purchasing schedule.

However, there was a little problem. In fact, quite a big one. Sanofi doesn’t have a vaccine to sell, and is unlikely to have one until the end of the year or later.

Hence, no doubt, the delays that are costing EU citizens so dear. And hence all the panic and the lashing out, including the ill-judged attempt to impose a hard border across Ireland and block vaccine deliveries to the North.

The threat was withdrawn almost immediately when the Irish Taoiseach explained what a terrible idea it would be.

And the pantomime continued when, yesterday, the Commission let it be known that its grand vaccine confiscation plan was all a big mistake! So that’s all right, then.

EU leaders have been hopelessly embarrassed, a fact that only makes them madder. And for daring to stand up for its basic legal rights, Britain must be punished.

In advocating this extremist policy, some German politicians have behaved appallingly.

Dr Peter Liese, a senior MEP from Chancellor Angela Merkel’s ruling party, has said: ‘The only consequence can be immediately stopping the export of the vaccines… the company [AstraZeneca] and the UK had better think twice. When we see Europe not treated well, it’s time we begin to show our weapons.’

Show our weapons? Wow! Did his forebears use this sorry rhetoric in the 1930s?

How ironic, too, that Brussels is trying to interfere with our vaccine contract even though both Macron and the German health ministry claim, erroneously, that the AstraZeneca vaccine isn’t even suitable for the older population.

Meanwhile, the rest of the EU stands by and watches as this sorry farce plays out. 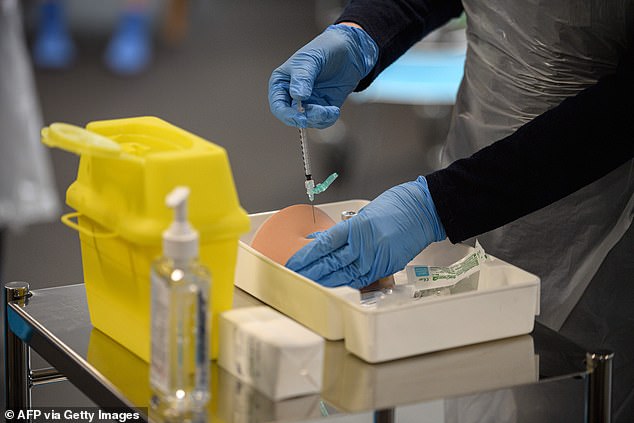 The EU Health Commissioner, Stella Kyriakides, a woman from Cyprus, where only 197 people have died from the virus, weighs in to say that buying vaccine can’t be treated like buying meat at the butchers.

Really? Of course, it can.

You contract for a consignment of vaccine and the manufacturer supplies it. Legally it’s the same thing.

In most civilised legal jurisdictions, interference with a valid contract, whether for sausages or vaccine, is treated as a serious illegality. But the EU Commission has no time for such niceties.

For our part, we have a right to expect a tough response from Boris Johnson. I am sure he won’t need reminding, as a long-time Brussels-watcher, that this EU inspired disruption to the one bit of his coronavirus strategy that has worked well – the rollout of the vaccine – would be a major blow to his Government.

But let me end on a happier note. The announcement about successful trials for the Novavax vaccine is a triumph for a burgeoning British industry that didn’t exist before the pandemic.

Until recently, the only vaccine factory in the UK, in Liverpool, was turning out flu jabs. Novavax is to be made on Teesside, and plenty of other different vaccine manufacturing plants have been set up or are planned.

That’s because the Government offered a warm welcome to companies researching, testing and introducing vaccines.

Lots of red tape has been cut. Thus, for example, a remarkable 400,000 volunteers have already taken part as guinea pigs in tests on emerging vaccines, all set up in a very short time.

Being a safe haven for some of the most creative and vital people in the world is a good way for Britain to respond to this pandemic. And we may need their brains again in the future.

According to a top China expert last week, there are plenty more viruses poised to escape from China that could have far more serious consequences than Covid-19.

We have been warned.