From a bra-flinging bride to a raucous couple’s cake smash: Award-winning wedding photographs reveal the VERY different ways newlyweds celebrate their nuptials around the world

A series of heart-rending wedding photos from ceremonies around the world are being celebrated for their unique portrayal of couples’ happiest of days in a newly-released list of award winners.

The Fotografos de Boda Wedding Photography Award showcases some of the most emotional moments from nuptials that have taken place in the past year – revealing just how different every couple’s special day really is, while also documenting the excitement and joy that brides and grooms felt at being able to finally tie the knot among their nearest and dearest in the wake of relaxed COVID restrictions.

Photographers from locations across the globe – from Spain to Venezuela – submitted their most touching and unique images for consideration in this year’s awards, with the winners featuring a wide variety of different snapshot moments from a host of different ceremonies.

From a bra-flinging bride to a raucous cake-smashing couple, this year’s top picks prove that there is no right or wrong way to celebrate a wedding.

Fotografos de Boda was founded in 2012 by Martino Buzzi with the goal of celebrating the world’s best wedding photographers. The FbB Award was launched to award the most prestigious of these.

Although based in Spain, this year’s award received entries from 400 photographers from across the globe. 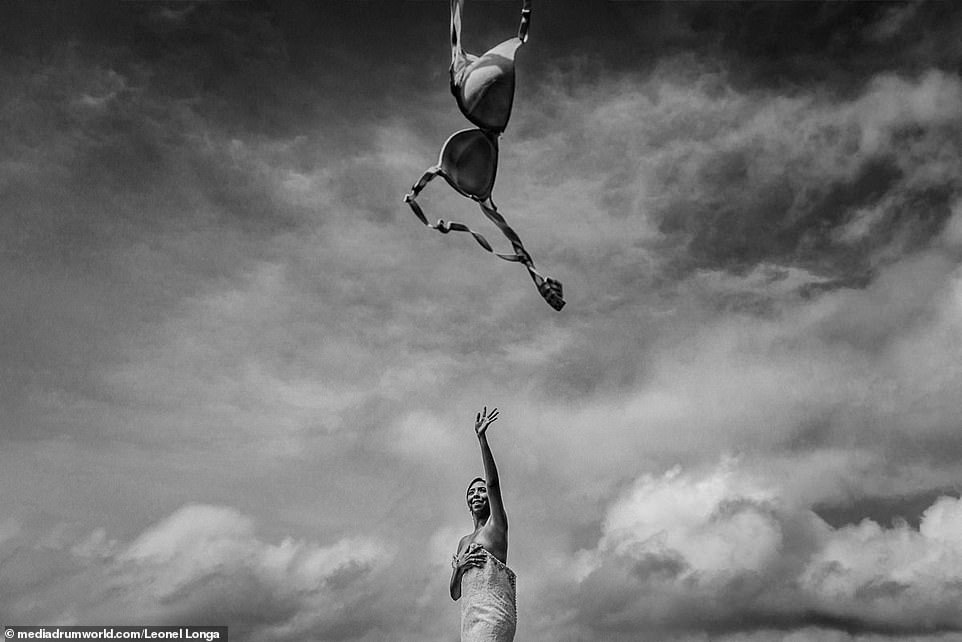 Wave your bra in the air like you just don’t care! The Fotografos de Boda Wedding Photography Award has revealed its winning images from the past year, including this snap of a bride in Venezuela flinging her lingerie into the air while holding her dress 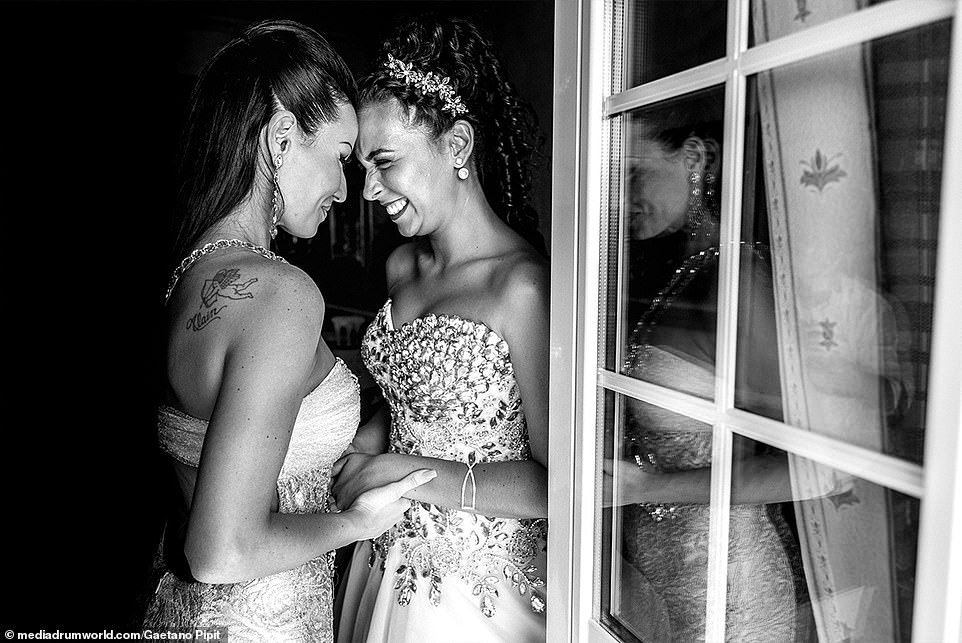 Touching: Some of the images – including this shot taken by Italian photographer Gaetano Pipitone – capture intimate moments between the couples, with this photo capturing the sweet excitement of two brides as they prepared to tie the knot 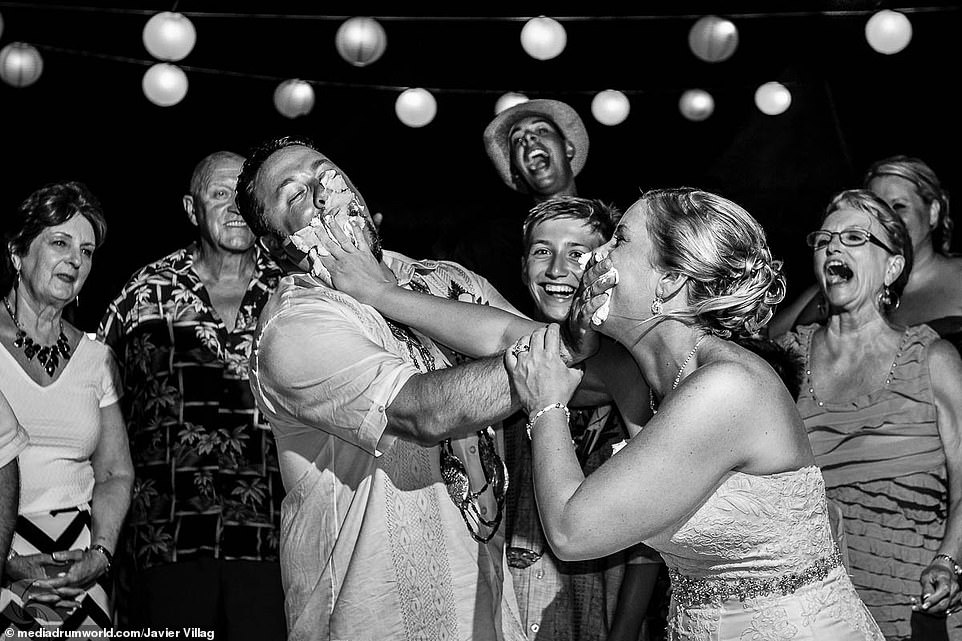 Sweet! Photographer Javier Villagran, from Madrid, Spain, was awarded one of the top prizes with the image of a couple cramming cake into one another’s mouths while their guests watched on in delight 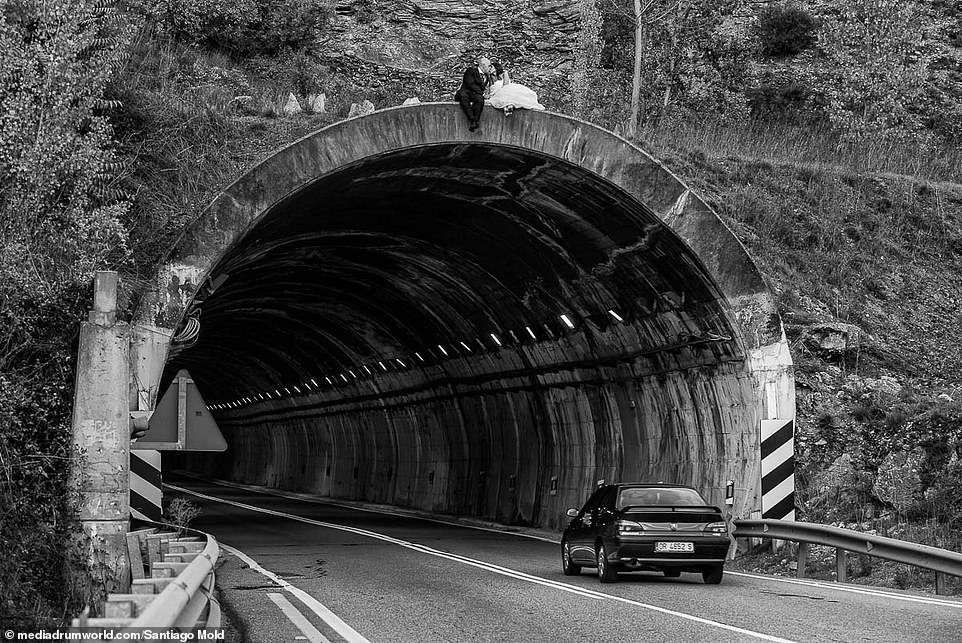 Need for speed: Santiago Moldes, from Ponferrada, Spain, captured a particularly unique photo of a bride and groom sharing a kiss while perched on the top of an underpass – as a seemingly-ignorant car drove beneath their dangling feet

‘Many photographers have suffered due to the COVID-19 crisis but now, they’re willing to get back to work with more energy than ever,’ Martino said.

‘Couples have learnt that there is nothing more valuable than photos of their special day so it’s important to make a good investment in your wedding photographer.’

In one image, photographer Spanish photographer Dami Saez photographed a bride standing in front of a mirror wearing a white lace dress whilst one of her bridesmaids zipped the dress up, and another started on the champagne.

In another, photographer Isma Sanchez, also from Spain, captured the moment a bride descended downstairs with her father, arm in arm, with the duo’s shadows cast against the wall marking a poignant moment on the bride’s special day.

In one winning photograph, photographer Leonel Longa, from Venezuela, captured the moment a horde of female attendees scrambled to grab the bride’s bouquet as she threw it over her shoulder, signifying who was next in line to tie the knot.

Spanish photographer Javier Villagran’s image featured a bride and groom stuffing each other’s faces with cake much to the amusement of the guests who stood around them.

Other stand-out photos included one by Roberto Abril, also from Spain, who photographed a mask-clad couple admiring the bride and groom who shared a kiss during their pandemic wedding, and Remedio Cruces’ image which showed a young flower girl trailing behind the bride’s train wearing a floral headdress and with a huge beaming smile on her face. 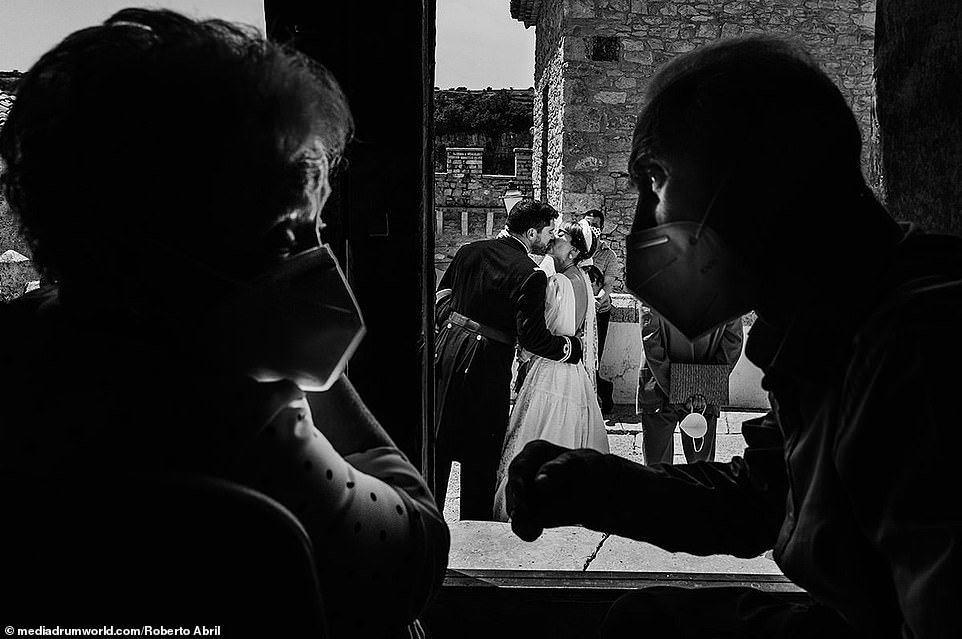 Reality: Only a handful of the images show a glimpse at how wedding celebrations have changed amid the COVID-19 pandemic, with Roberto Abril capturing an elderly couple wearing masks while gazing at one another – as a bride and groom celebrated their nuptials in the background 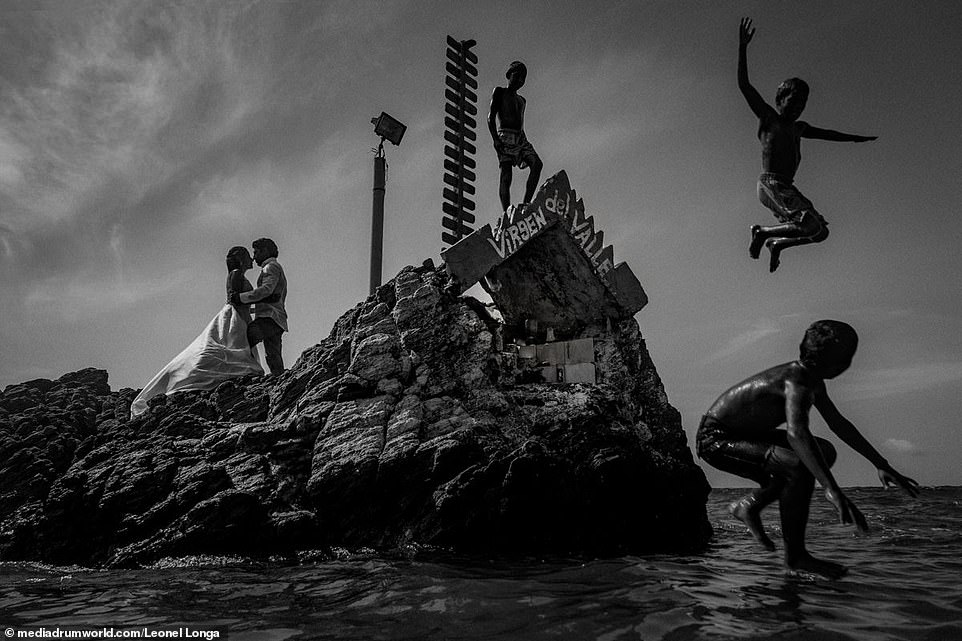 Twice as nice: Longa managed to get two images in the top list of award-winners, including this image of a bride and groom in Spain embracing one another as children jumped off rocks into the ocean 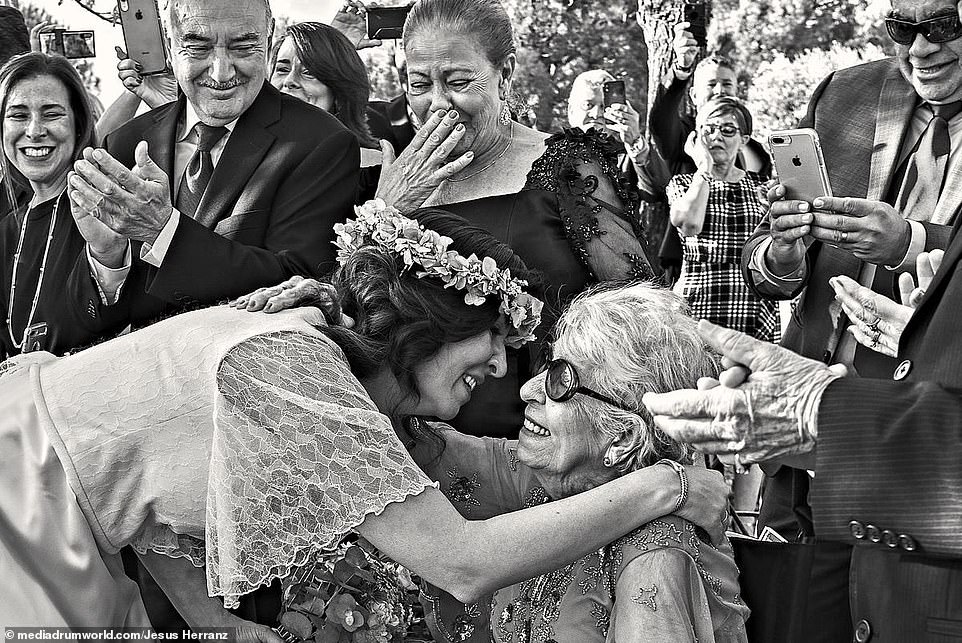 Family: Spanish photographer Jesus Herranz focused his camera on a bride and her grandmother, who shared a touching hug while surrounded by their family – a particularly poignant moment given that so many people were unable to embrace their loved ones during the height of the COVID-19 pandemic 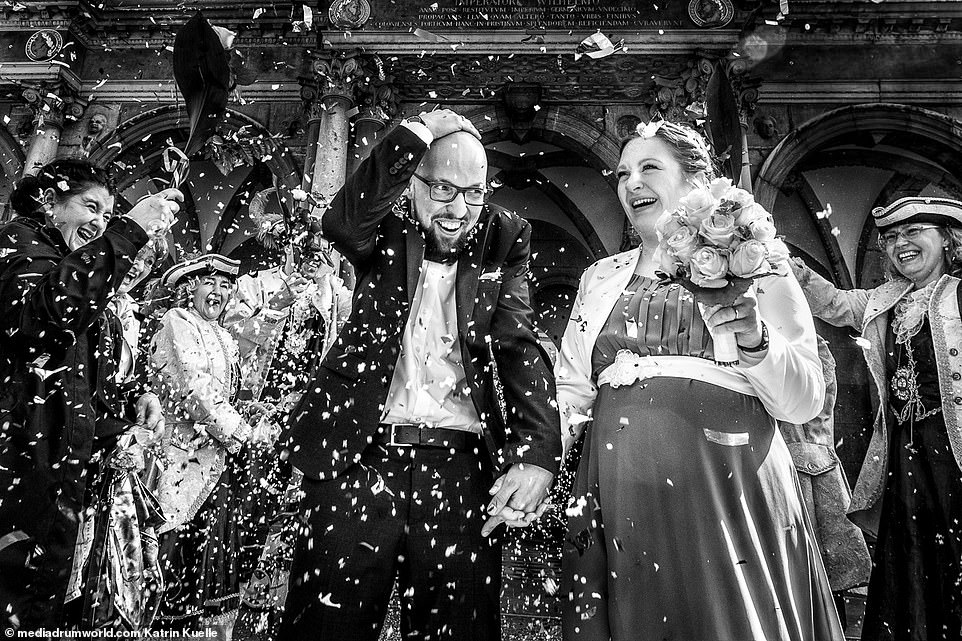 Overwhelmed: Katrin Kuellenberg, from Germany, snapped one of the more traditional wedding moments, captured a pregnant bride and her groom being showered with confetti by their eager guests as they emerged from their ceremony 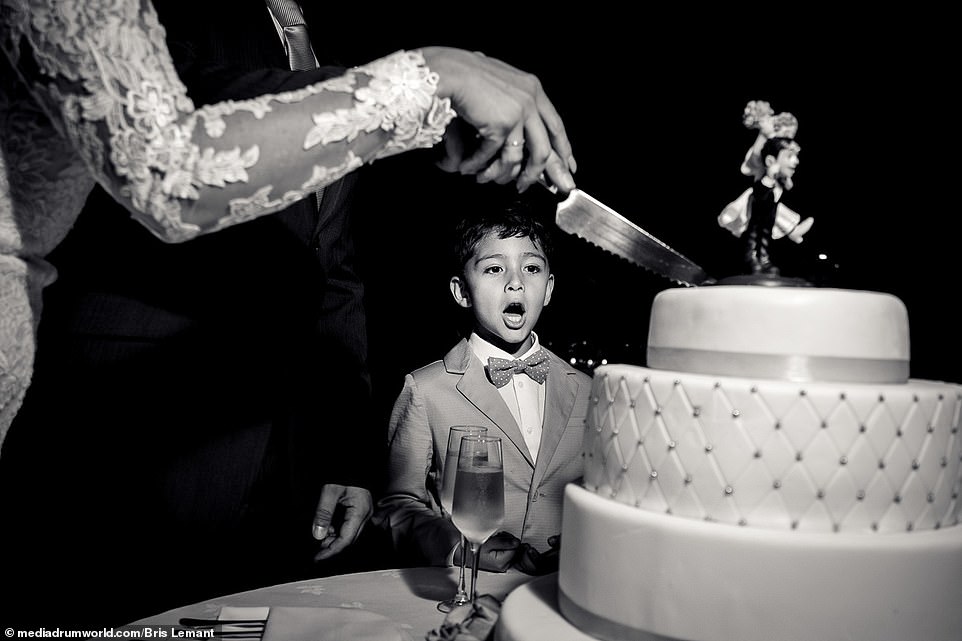 Eyes on the prize: Proving that brides and grooms are not the only focus of wedding photography, this image by Spain-based snapper Bris Lemant captures a sweet young boy watching on as a couple’s cake was sliced – clearly eager for his piece 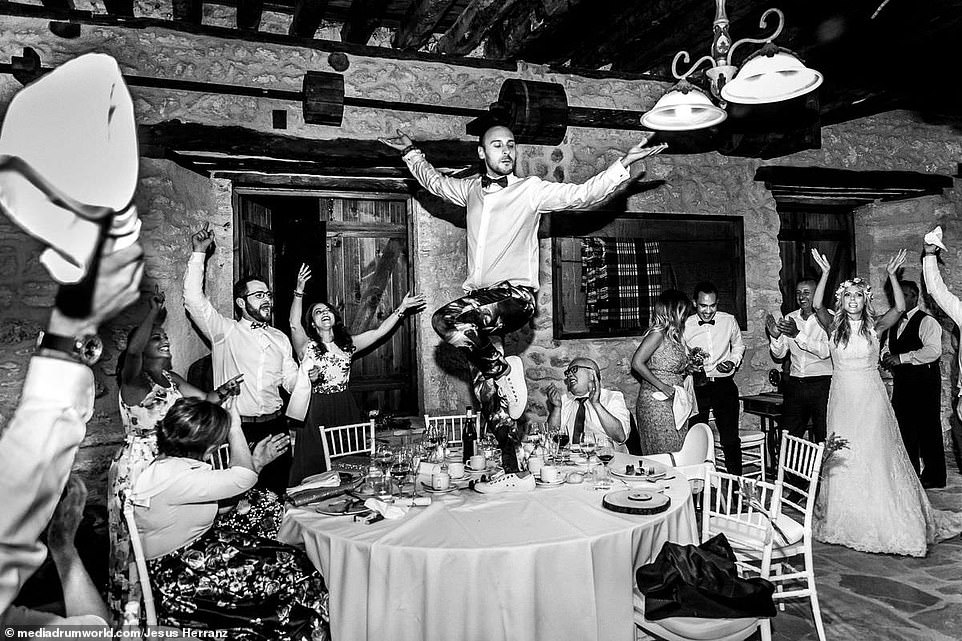 All singing, all dancing: Herranz is another photographer who landed two images in the list of award-winners, thanks to this celebratory snap, which shows a man in floral trousers dancing atop a table at a wedding, while his fellow guests crowd round to applaud his moves 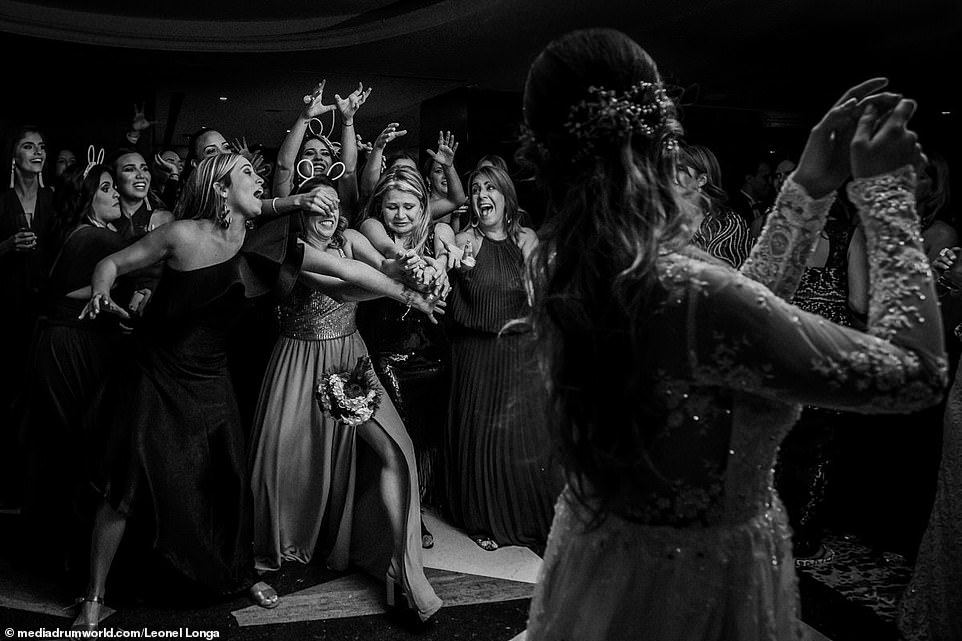 A swing and a miss: Bridesmaids and female wedding guests at this ceremony in Spain were captured by Longa clamoring to catch the bride’s bouquet – only for the entire group to miss the floral arrangement, which went crashing towards the ground as the women grabbed at empty air 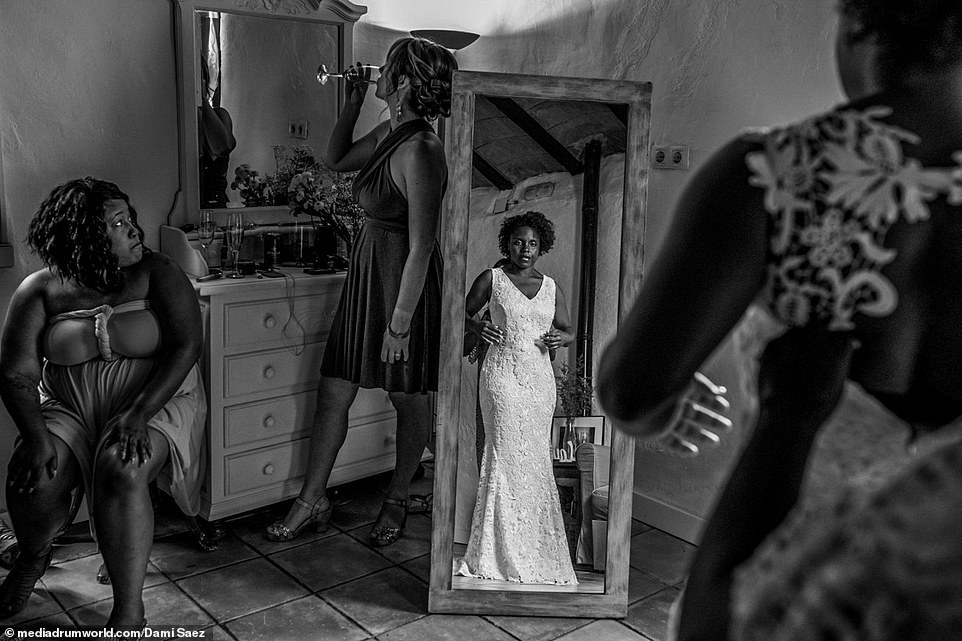 Preparations: Dami Saez, a photographer based in Spain and Norway, offered an intimate look into this bride’s final few moments as a single woman, documenting one bridesmaid helping to adjust her dress, while the other members of her bridal party relaxed in the room 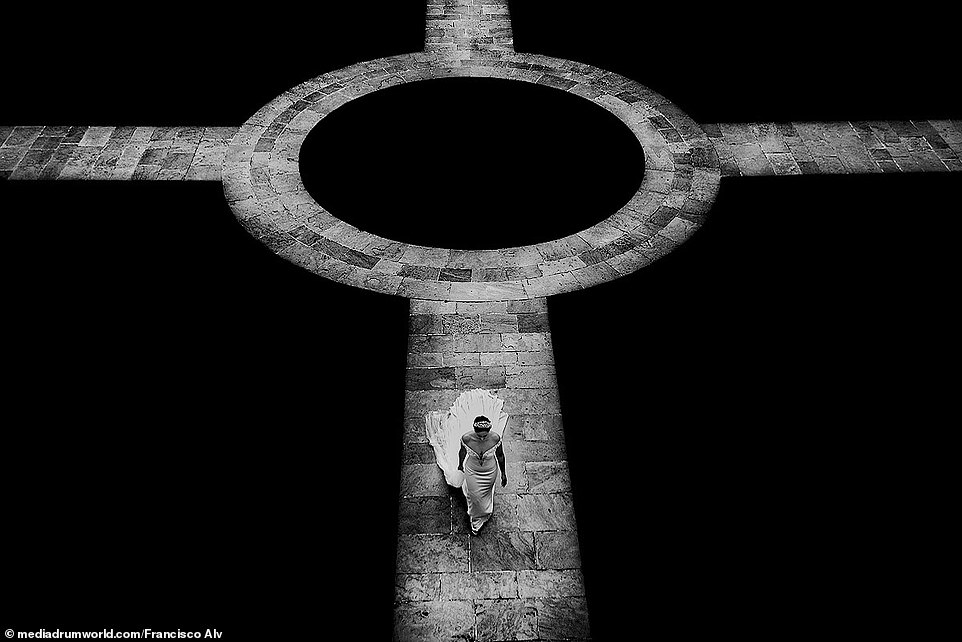 Arty: Spanish photographer Francisco Alvarez Fraco caught one bride’s brief moment of solitude at her wedding – before she was surrounded by guests and family members 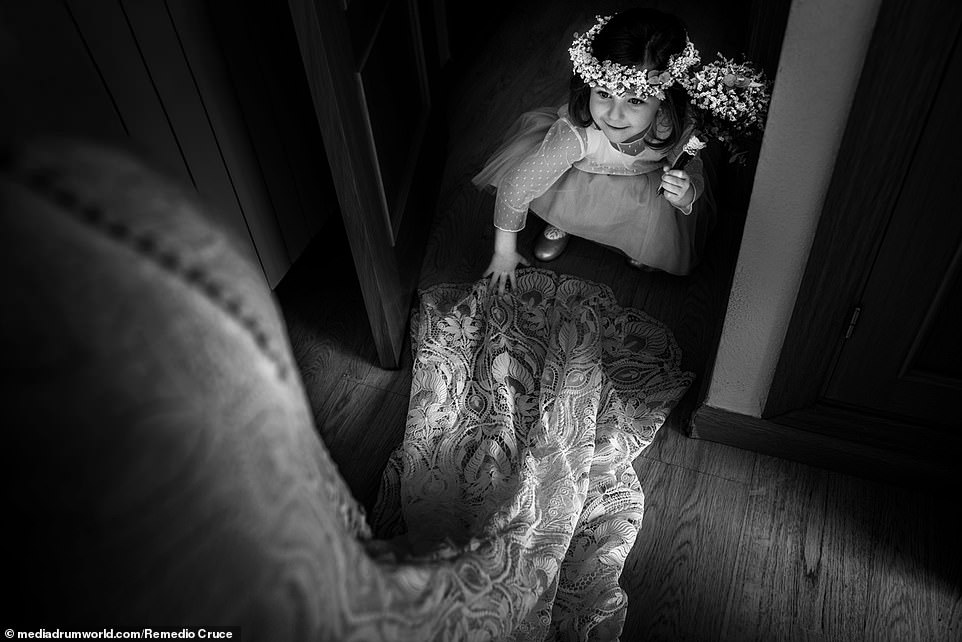 Helping hand: Remedio Cruces, from Spain, focused the camera on a sweet flower girl, who seemed completely awed by the bride’s beauty – and her incredible dress – while helping to pick up the train as it dragged behind her 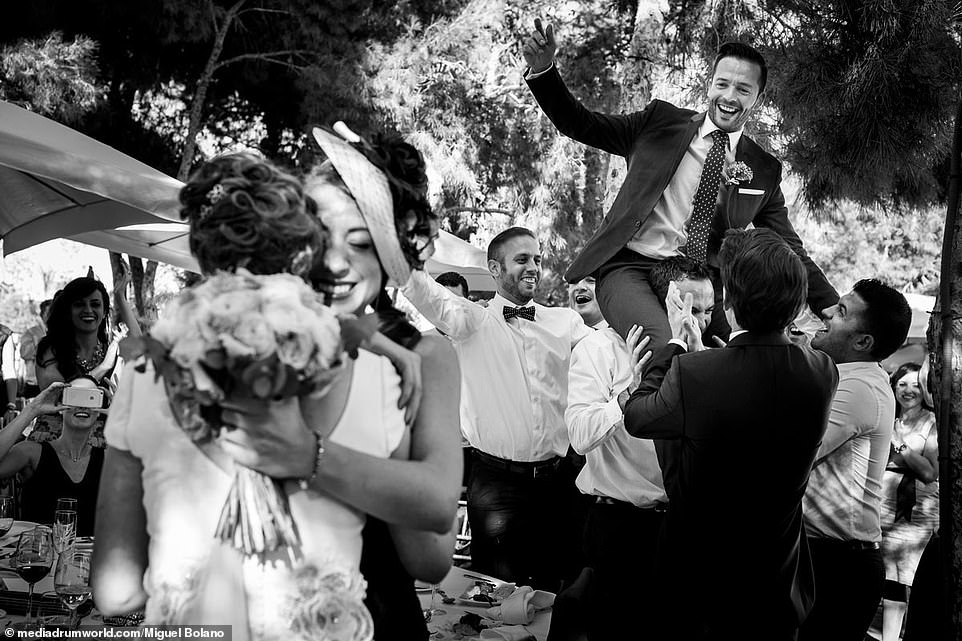 Something for everyone: A couple in Spain are seen celebrating their newlywed status with their friends, with the bride sharing a touching hug with her maid of honor – while the groom was given a rather more raucous greeting by his pals 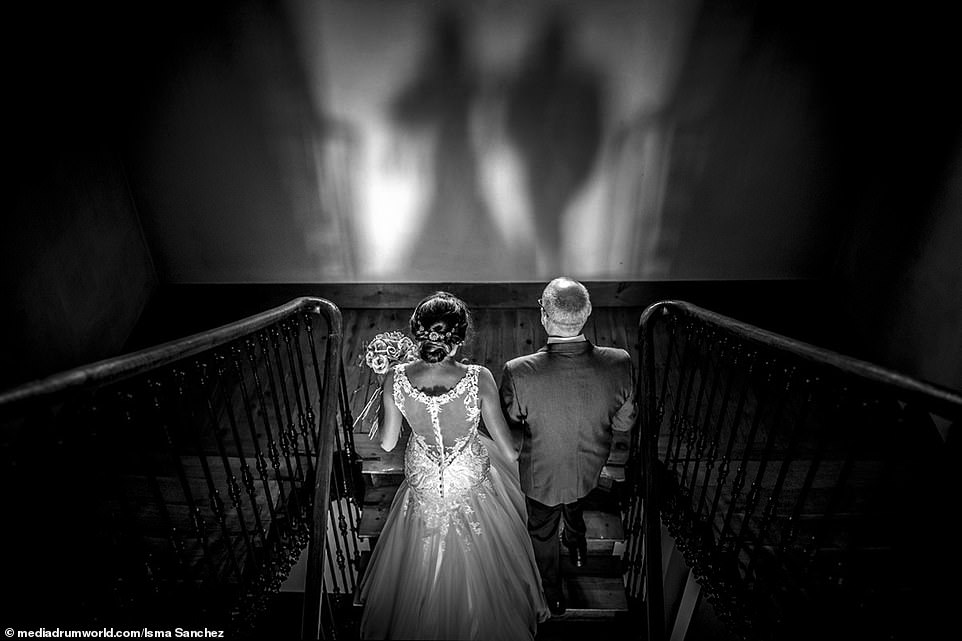 Coming together: Isma Sanchez, also from Spain, documented the final few moments before a father gave away his beloved daughter at her wedding, with the pair seen ascending some steps at the venue 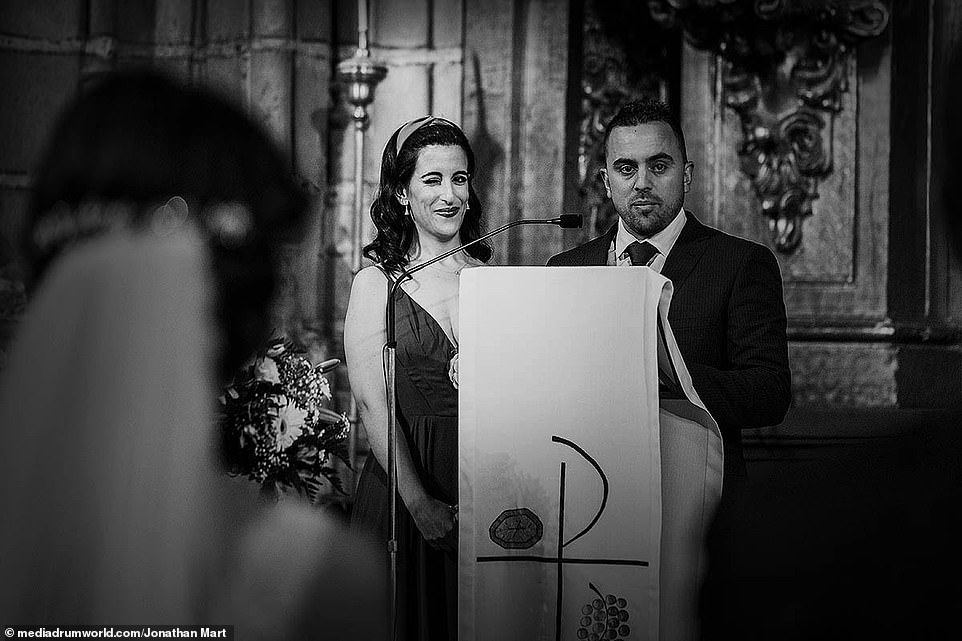 Wink wink: The final image in the line-up, captured by Jonathan Martin, shows the bride being given a cheeky wink at the start of her wedding ceremony