‘I’m sexually assaulted by women up to 10 times a night’: Bouncer, 19, reveals other guys think he’s ‘lucky’ because girls try to grab his genitals and unzip his clothes – but insists men wouldn’t get away with doing the same thing

A bouncer who says women touch him inappropriately throughout his shift at work is sharing his experiences to TikTok to bring awareness to male harassment.

Charlie Jeer, 19, from Canterbury, revealed that he’s been grabbed on the bum, genitals and even had women try to unzip his clothing while at work – with one brazenly declaring ‘Who cares about sexual assault?’ when being chucked out.

The teenager says he doesn’t want to be seen as a victim, but wants to highlight what he and countless others experience working in the industry ‘to start a conversation’.

The TikTok videos, which have racked up more than one million views, show Charlie recounting experiences he’s encountered while working on the doors. 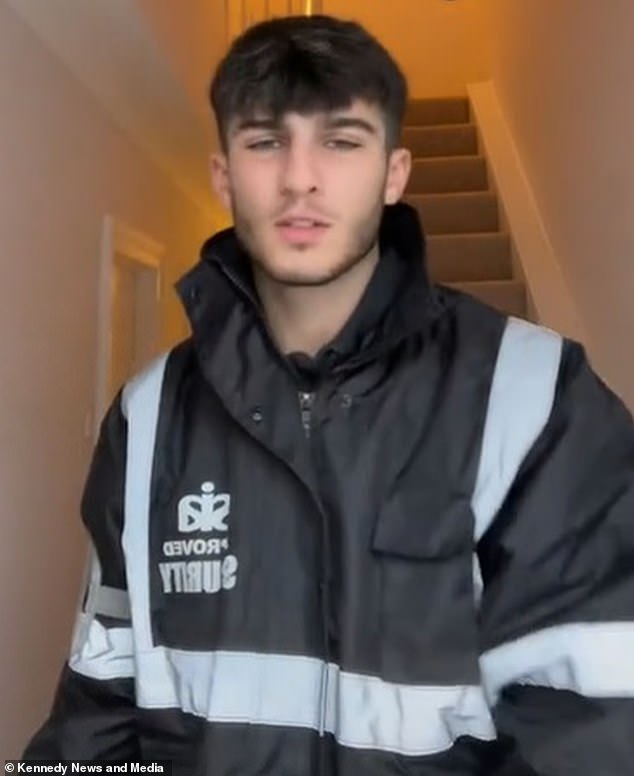 Despite feeling that his story needs to be heard, Charlie recognises that he is in control as a bouncer and as such he doesn’t feel like a victim 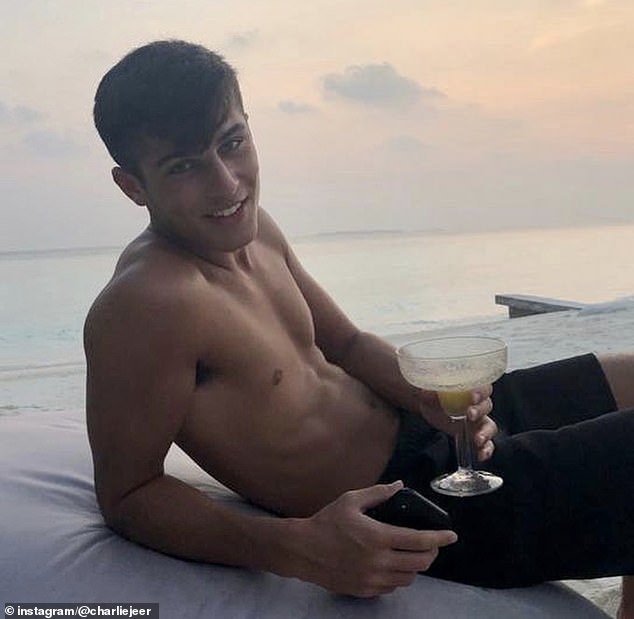 Charlie, pictured on holiday in the Maldives, is focused on changing the minds of men who say they envy him and implores women who grope men to stop

The economics student, who works on security alongside studying, said most commenters supported him for speaking out, but that some blokes joke, ‘Why does this never happen to me?’.

Charlie said: ‘So many guys and girls get sexually assaulted working the doors, and I don’t think it gets spoken about at all.

‘I was told, going into the industry, that this might happen but I had no idea it would be so regular.’

‘I’ve only been doing security for the last year and in that time, there are countless occasions where women have come up to me and attempted to unzip my clothes or grabbed me sexually.’ 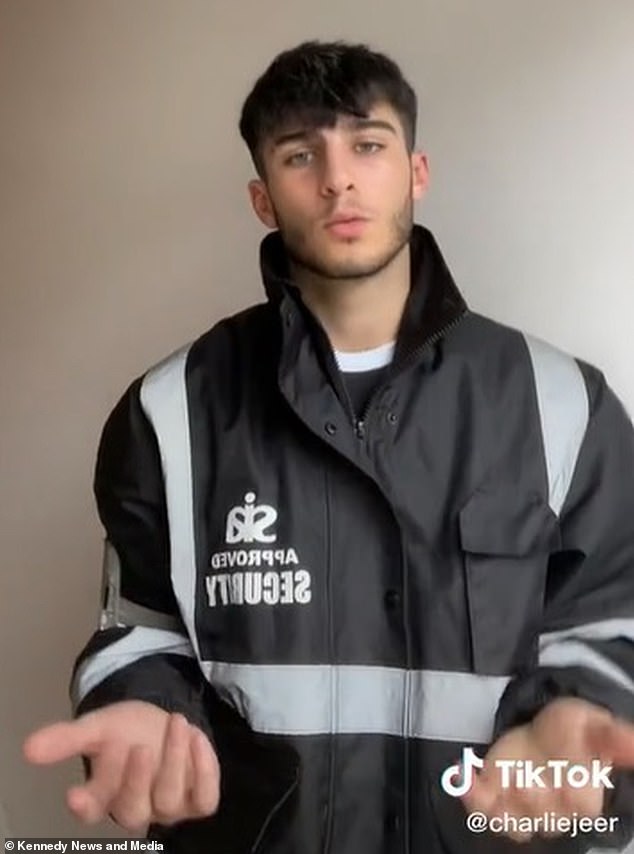 Despite having many stories of being assaulted under his belt, Charlie has only been working as a bouncer for a year 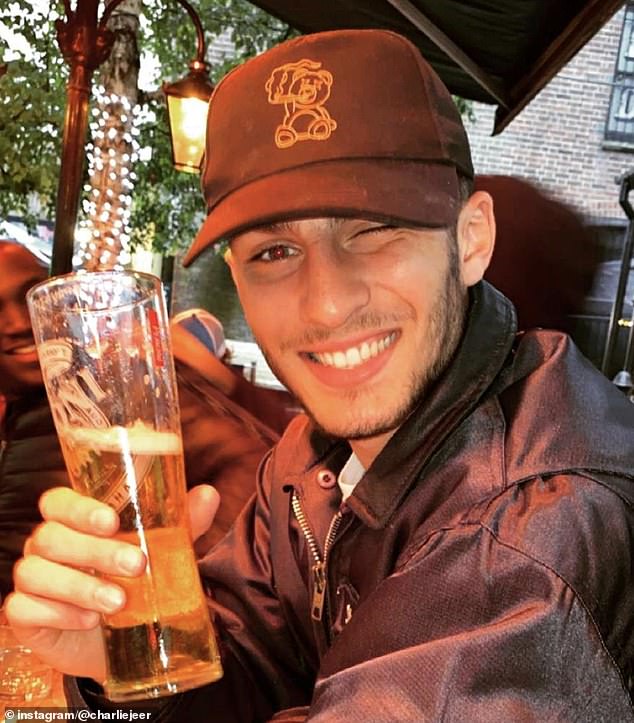 The economics student, who works on security alongside studying, said most commenters supported him for speaking out, but that some blokes joked: ‘Why does this never happen to me?’

‘I don’t feel like a victim because in working security you do have some kind of control over the situation.’

‘You have people working with you, there’s cameras on you.

‘If a woman’s grabbing me, I feel strong enough to get her off me, which makes me feel like less of a victim.

‘But at the same time, the touching is unwanted.’

One unpleasant incident highlighted was when Charlie was grabbed on the bum three times by a woman before she was kicked out. 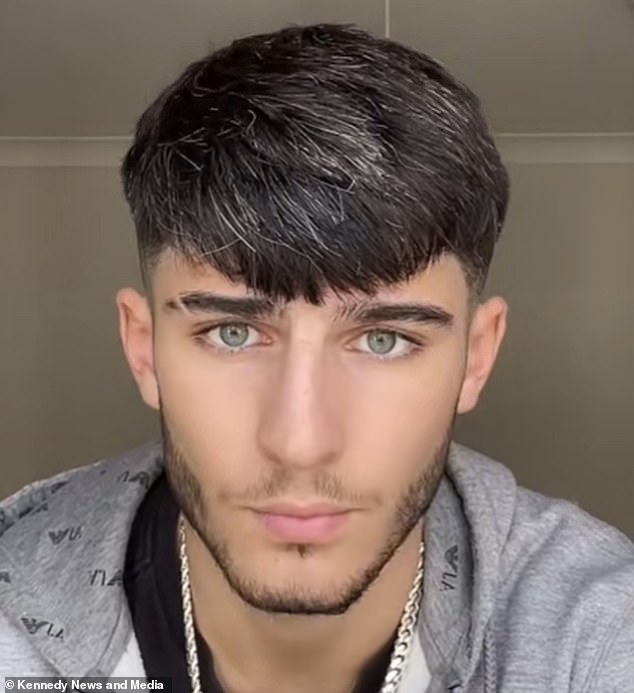 The unrepentant reveller apparently declared ‘who cares about sexual assault?’ as she was being frog marched out of the doors.

Charlie said: ‘I was working at an event in Norwich, and the policy at our venue was that people couldn’t get up on the tables and chairs.’

‘A majority of our job that night was going up to people and telling them to get down. I went up to this one lady and told her to get down.’

‘As I was walking past them again, she grabbed my bum. I ignored the first time, but as I was passing back through she blocked my way.’ 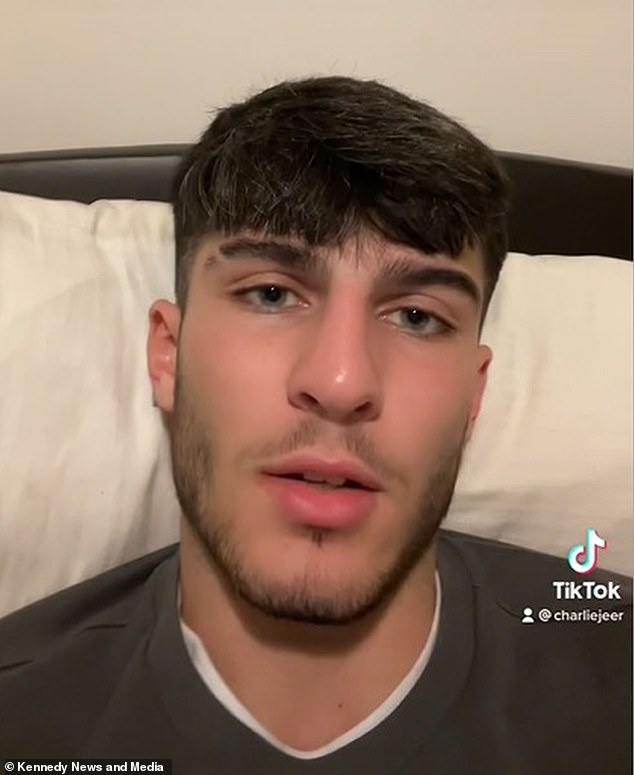 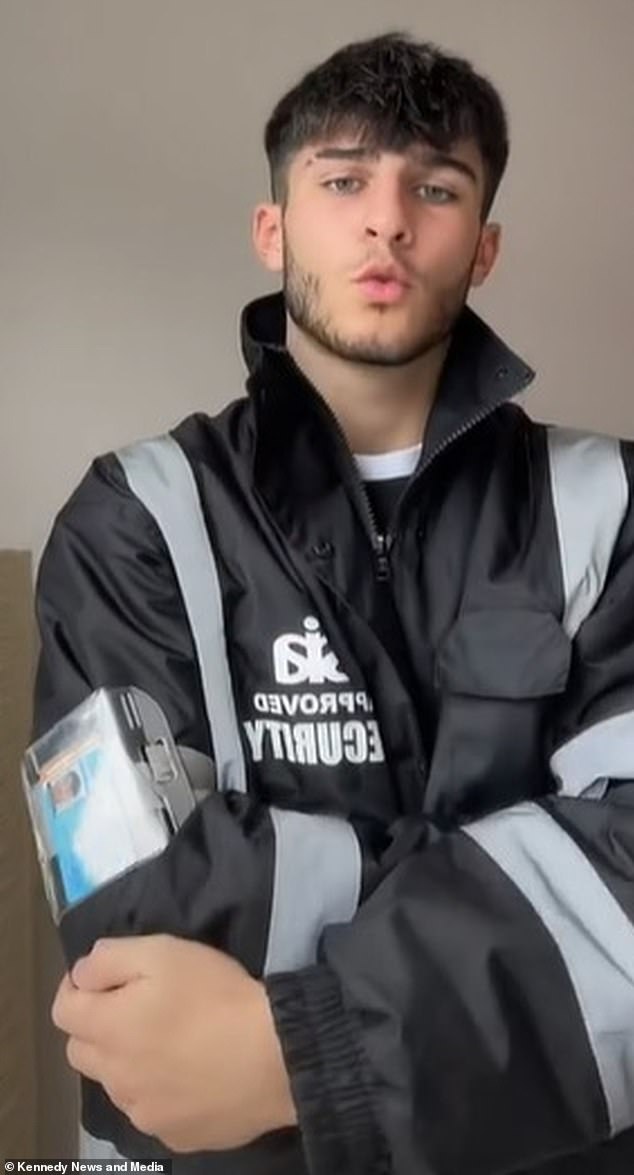 Despite the occasional negative experience, Charlie largely enjoys his work and feels it provides a lot of good opportunities.

‘I asked to get out of the way and as I got past she grabbed my bum again.

‘I turned around and said ‘do not touch me again’.

‘Later on I approached her table again to tell her friends to get down off the table.’

‘By this point I’d been walking through a sea of women for the last two hours who’d been touching me.’

‘I’d say I got touched over ten times that night – in ways that I didn’t want to be touched.’

‘I asked one woman to get down off the bench, and she started rubbing and touching my face. I found that really uncomfortable.’

‘While this was happening, the same woman who had previously been touching me walked around and grabbed my bum for the third time.’

‘At that stage, I just got fed up. I turned around and said ‘it’s time to go now’. She obviously wasn’t very happy about that.’

‘I asked my two female colleagues to take her out of the building. It was on her way out that she said ‘who cares about sexual assault anyway?’

‘That’s what stuck with me about the situation and made me post about it.’

‘If she thinks that, how many other women are thinking ‘who cares about male sexual assault?’

‘How many people in general are thinking ‘who cares about sexual assaults on nights out?’

‘To make it worse, she snuck back in and she looked at me with a smug look on her face. 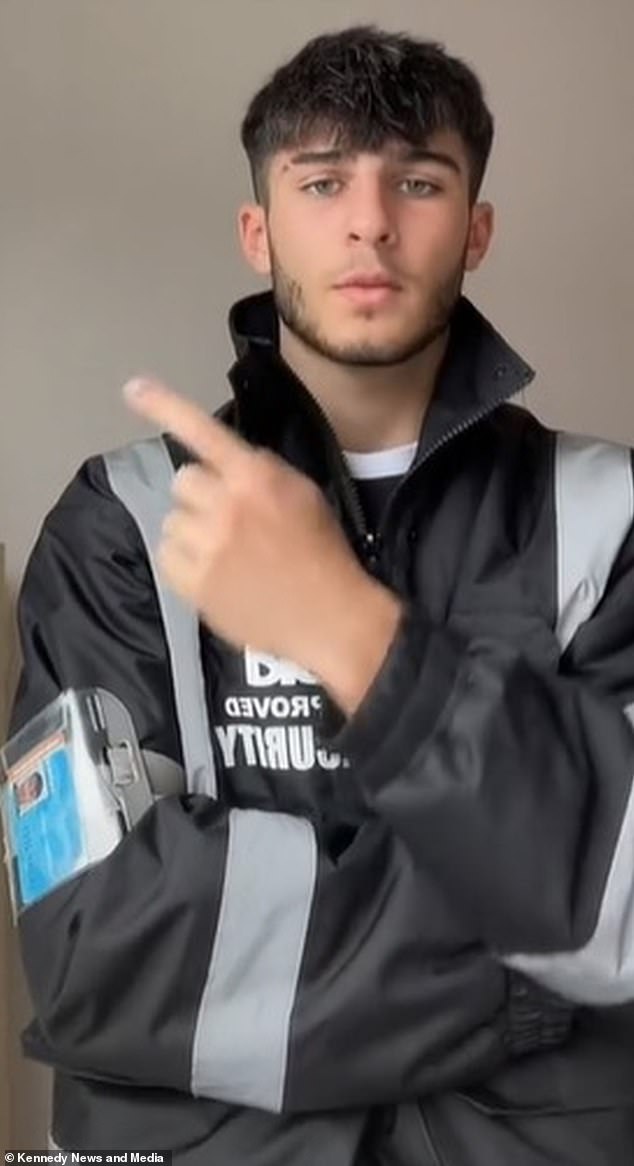 Charlie says he isn’t looking to make his TikTok a ‘doorman’s diary’ but if he thinks something needs to be said, he’ll put it out there

‘She got removed again but it frustrated me that she had the nerve to come back in after that situation. That annoyed me a lot.’

‘It’s the fact that people will go and forget their morals that they practise in day-to-day life.’

‘For people to forget about these values and act in this way is just not right.’

‘Working in this industry, you can go around and have a laugh with people, but there is a boundary that can be overstepped.’

By sharing his experiences online, Charlies wants to get revellers to think twice about how they behave on nights out.

Charlie said: ‘I made the videos to start a conversation and to get people to reassess their ways of thinking.

‘The reception I got was largely positive but there were still quite a lot of guys who said stuff like ‘I need to get this job’.

‘I felt like the response to me, as a man, was ‘I’m jealous’ and that I was lucky to have this done to me.’

‘The post wasn’t necessarily meant to raise awareness among women, even though there clearly are women who think this way otherwise this wouldn’t be happening.

‘But there are a massive number of men who think men are lucky to be touched, and don’t support other men who get touched without consent.

‘I wouldn’t want to single out one gender. Just generally, there are people out there who don’t care about men being sexually assaulted.

‘The response was divided. Most of the people who have privately messaged have been nice.’ 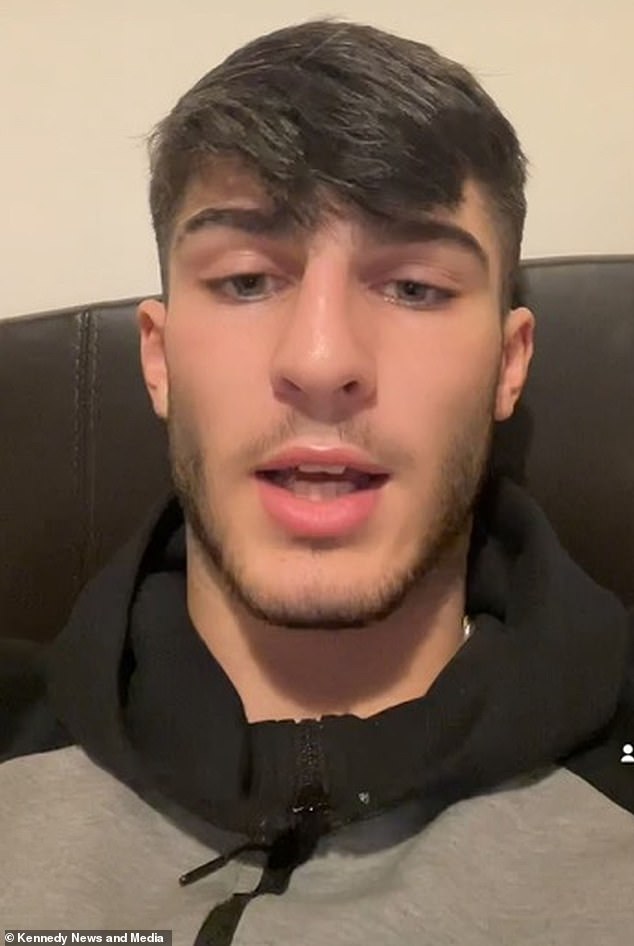 Despite the occasional negative experience, Charlie largely enjoys his work and feels it provides a lot of good opportunities.

Charlie said: ‘What I like about being a doorman is that it’s self-employed work and I can do it whether I’m in Norwich [at uni] or Canterbury.

‘The hours are convenient for student life. I still like the job, despite any negative experiences.

‘Ultimately doormen are there to help people. I make it a purpose of mine to make sure people feel comfortable to come up to me and ask for help.’ 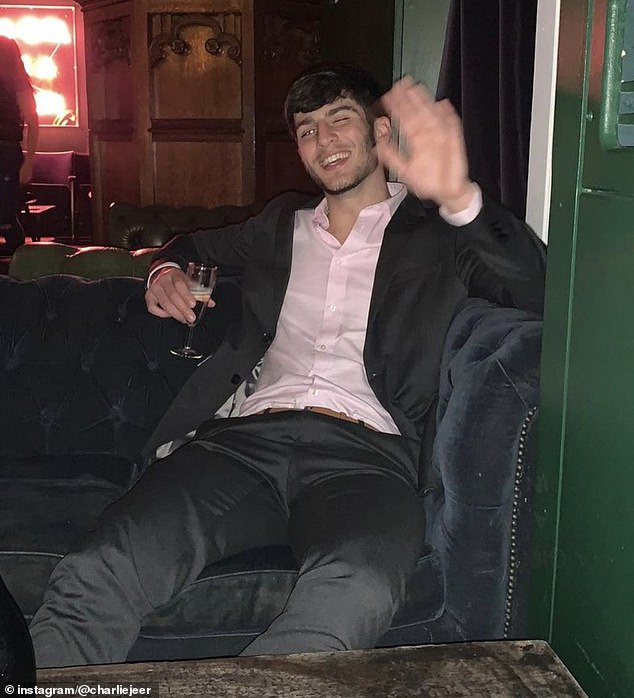 ‘It’s a really constructive job, I really enjoy it. There are just the occasional things that make it harder.

‘I’m not looking to make my TikTok a doorman’s diary, but if I think something needs voicing, I’ll put it out there.’

Many commenters commended Charlie for speaking and offered their support.

Another commented: ‘Good for you. No one has the right to touch anyone without their consent.’

Another social media user wrote: ‘It’s sad that men have to use the line ‘imagine if that happened to a girl’ to make people understand.’

Some commenters were less supportive and made light of the situation.

One commenter wrote: ‘I’m a plumber, why doesn’t this ever happen to me ffs..’

Another commented: ‘Standard but if she was peng, would you have? I would have.’

In one video Charlie speaks to the camera and re-calls the moment a woman grabbed his penis without permission.

Charlie said: ‘I do security alongside my uni degree and one night I was working at this place and I was stood at the front door.

‘And basically, these girls were on their way out. There was two of them, they’d had a bit to drink, maybe a bit too much.

‘We hadn’t kicked them out or anything like that, they’d chosen to just end the night.

‘So as one of them walked past me, they came up to me and were like ‘Ah yeah, what’s your Instagram?’

‘And I said to them: “I don’t really give my Instagram out like that”. Whatever, but they kept asking and kept going.;

He said that the womenn kept insisting and then one of them grabbed with penis with ‘no hesitation’.

‘And then, as I look away, boom. This ting just grabs my wood. No hesitation, nothing like that. Full pelt, grips my wood up.

‘So obviously, I was like ‘What the f*** are you doing?’ I pushed her off, told her she got to go or whatever. She left.

‘But then, the next weekend, she comes back with all her friends. I’m like, “Look, you sexually assaulted me. Same thing. If you’d done that to a girl, you wouldn’t get let in again. You done it to me, you’re never coming in”.

‘Anyways, I made her and her friends turn round, and she never came in again.’

In a follow-up video, Charlie said: ‘There was one woman who got up on her chair and I went up to her and said ‘can you get off the chair?’

‘As she gets off the chair, she thinks it’s a good idea to grab my bum.’

‘And I just ignored it, because there was so many other people on tables and chairs that I just wanted to go and get them down.’

‘A bit later on in the night, I’m walking back through the crowd of people, and she grabs my bum again.’

‘At this stage, I just turned around to her and said: “Don’t touch me like that. I’m just doing my job. I don’t go up to you at Tesco’s and squeeze your bum”.

‘She listened, and I carried on.

‘Of course, later on in the night, one of her mates gets up on the table. Went up to her, I went ,”Look, get down off the table”.

‘And as she’s getting down, she starts touching my face up and loads of stuff.

‘And as I said that, her mate – who was the one that grabbed me before – comes up behind me again. Boom. Grabs me.

‘I counted. That night, I got touched up by women non-consensually over ten times.’

‘I called over a female doorman to kick her out, because I didn’t feel comfortable gripping her up and kicking her out myself.’

‘And on her way out, after denying it for ages, she said to the female doorman, “Who cares about sexual assault anyways?”.’