Federal charges have been filed against five people for their alleged roles in a human smuggling operation in Houston, the Department of Justice announced on Monday. The charges stem from the Friday discovery of nearly 100 undocumented people in a single house.

Marina Garcia-Diaz, 22; Henry Licona-Larios, 31; Kevin Licona-Lopez, 25; Marco Baca-Perez, 30; and Marcelo Garcia-Palacios, 21, are all alleged to have “harbored, concealed and shielded illegal aliens for the purpose of commercial advantage or private financial gain,” the department said in a statement. None of the five are U.S. citizens and all are living in the country illegally, the department said.

Houston Police on Friday discovered 97 “undocumented noncitizens” in a two-story home after receiving a 911 call. A woman reported her brother had been kidnapped, saying she had paid smugglers “several thousand dollars” to get her brother into the U.S., the Justice Department said. The smugglers allegedly demanded more money and threatened to kill the woman’s brother.

The undocumented people were found in two separate rooms in the house that were each locked from the outside, the charges allege. The criminal complaint also alleges that they were found wearing only their underwear.

There were no children found in the home and only five of those found were women, according to Houston police. Five of the undocumented people tested positive for COVID-19, police said. 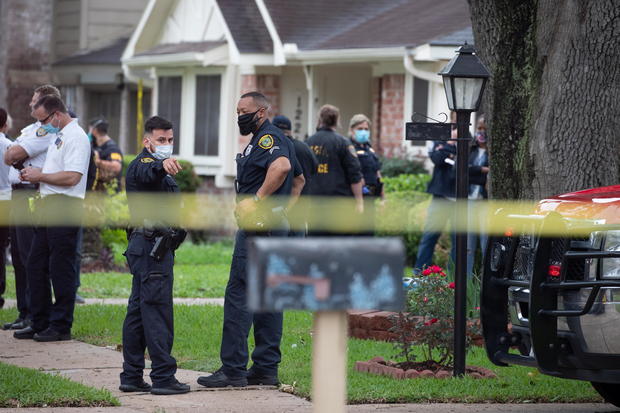 More than 20 migrants were found hiding in the back of an 18-wheeler in the Rio Grande Valley on Thursday.

On Sunday, three people were killed and five hospitalized when a boat that is suspected to have been carrying out a human smuggling operation broke apart in the water off the coast of San Diego.