YouTuber Colleen Ballinger — who rose to internet stardom thanks to her lipstick-loving character, Miranda Sings — welcomed her twins early, she announced Wednesday on Instagram. 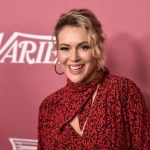 The comic and her partner Erik Stocklin were already parents to son Flynn, who was born in 2018 and now they’ve added a baby boy and a baby girl to their family.

Ballinger gave birth to her twins on November 6 with both weighing in at just over four pounds. Like their older brother, who was born three weeks before his due date, the twins arrived sooner than expected, just 32 and a half weeks into Ballinger’s pregnancy.

In a birth video posted to YouTube on Wednesday, a still-pregnant Ballinger laughs at the similarities between her all her pregnancies, before going to the hospital. “I have to pack, we don’t have names, it’s the same situation as Flynn,” she tells the camera after explaining that her water broke. “You’d think I would have learned my lesson with Flynn!”

When Ballinger got to the hospital she was told she was experiencing a dangerous complication called a cord prolapse and she was rushed into surgery for an emergency C-section, which went well. “I’m okay, the babies are both okay, and they’re going to be living in the NICU for a while,” Ballinger explained after the birth.

In the video, the comedian is also seen visiting her babies in the NICU and asking them why they came so early. The video concludes with a happy update from Ballinger who shares that while it is scary to have babies staying in the NICU, her twins are doing well and are strong and breathing on their own.

“It’s kind of scary and hard,” she explains, “But it is real and it is part of their story and our story.”

She also thanked the NICU staff and promised more updates on the birth soon…or maybe not.

Read on for these unique celebrity baby names.