In today’s great news for cannabis-loving parents (and probably disturbing news for those wary of a reefer madness resurgence): You can now soothe your sweet little one to sleep with the help of marijuana. No, not the drug itself, silly — a children’s book about marijuana, of course! Because you know it was only a matter of time before this existed, right? Right.

But the news just gets better: The book in question, It’s Just a Plant, comes to us courtesy of none other than illustrator Ricardo Cortés. Even if you don’t recognize his name, you’ll definitely remember his (amazing) work in another great children’s tome of our time, Go the Fuck to Sleep (which now also has an effing sequel). But if you somehow missed that defining cultural event of the 2010s, there’s no time like the present to hop onto the Cortés train with It’s Just a Plant, which tells the story of a little girl getting educated about pot — from the perspectives of her parents, a doctor, a farmer, and a cop.

So, why a kids’ book about pot? Well, the drug is now legal for recreational use by adults in 12 states, and for medical use in 33. Translation:

“Marijuana is around kids!” Cortés writes emphatically on his site. “Awareness of the plant can begin early, through pop culture or by simply opening a parent’s drawer. Millions of kids have a parent who uses marijuana. Many children are affected by the incarceration of a parent for selling marijuana. Other kids have parents who use the plant medicinally. We can educate children about plants without piquing a desire to try them.” 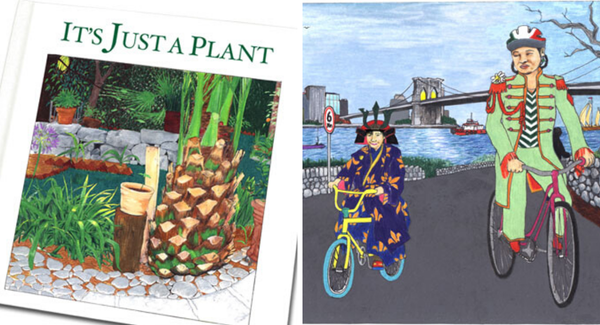 And as controversial as the topic may seem for a kids’ book, he’s actually…right. It’s crucial for parents to be open and educate their kids about marijuana (and any other drugs, really) in a factual, non-judgmental way — especially if parents are using themselves. After all, keeping drugs’ existence a mystery is only going to spark curious kids’ interests further.

“Whether it’s alcohol or cannabis, it’s all about having honest conversations with your kids, modeling good behavior and helping them develop the self-confidence and common sense to make responsible decisions,” mom and cannabis activist Jane West told SheKnows.

But that does not mean you should smoke in front of your kids (hi, secondhand smoke): “There are cannabis-infused wines, coffee and, of course, various edibles,” Junella Chin, MD, told SheKnows. “This allows parents to use more discreetly. When using a vape, joint or pipe form, the conversation of smoking and the health effects of that should be addressed with children.”

And what better way to ease into the topic than with a delightful family storytime? I mean, the sneak peek illustrations on the It’s Just a Plant Instagram really speak for themselves.

One night Jackie woke up past her bedtime. She smelled something funny in the air, and tiptoed to her parents’ room.

But before you freak out too much about this children’s book and its drug-pushing agenda, Cortés wants to clarify: The book does not advocate for marijuana use. “It’s Just a Plant explicitly addresses the potential harm of drug abuse and insists that marijuana is not to be experimented with by children,” he writes on his site. “As with books that teach kids about sex, It’s Just a Plant encourages parents to explore the topic and children’s questions about it, all the while reminding them that trying ‘pot’ is an experience for responsible adults.”

Responsible adults not within secondhand-smoking distance of kids, that is.