We’re not imagining it: However lopsided our “work-life-balance” was before the coronavirus, it’s almost certainly a mess with kids at home from school and camp. A recent study of parents in England found that women are bearing the brunt of this new situation. Not only have more women become unemployed than men, but those who are working are still doing more of the childcare and household work, and they get only a third as much uninterrupted work time as men do.

The study, done by the London-based Institute for Fiscal Studies, conducted a survey of 4,915 English parents in two-parent, opposite-gender households with children ages 4-15 in April and May, and compared their use of time to data from 2014-2015. We already knew that mothers were doing more than fathers at home before the lockdown, but the numbers now are, well, super depressing.

First of all, these moms were 9 percent less likely to still be working during the pandemic than dads. But the situation is also hard on those who are working from home.

“They have reduced their working hours more than fathers even if they are still working and they experience more interruptions while they work from home than fathers, particularly due to caring for children,” Alison Andrew, a senior research economist at IFS, said in a press release. “Together these factors mean that mothers now are only doing a third of the uninterrupted paid-work hours that fathers are. A risk is that the lockdown leads to a further increase in the gender wage gap.”

Those numbers get really startling when broken down by gender. Mothers are doing 2.3 more hours of childcare than fathers. What’s more, even when both parents are still working, fathers win in terms of getting more quality work time. The men, on average, get in 5.1 uninterrupted work hours a day (compared to 6.6 in the beforetimes), or 70 percent of their paid work time. Meanwhile, women are working uninterrupted for only 2.6 hours a day (4.7 pre-pandemic), or 53 percent of their work time. In other words, while they once could work for 60 percent of the uninterrupted hours as their male counterparts (still a terrible statistic!), now they’re down to 35 percent.

Most of that interrupted time, the researchers write, usually consists of “passive” childcare — trying to work while having the kids in the same room.

“The vast increase in the amount of childcare that mothers are doing under lockdown, which many are juggling alongside paid work, is likely to put a strain on their well-being,” IFS research economist Lucy Kraftman said in the press release. Understatement of the year?

There is some good news in this study, however. Though they’re not doing as much as mothers, fathers are doing more housework and childcare than they did in the beforetimes. They’re doing an average of eight hours a day of childcare compared to four. That may have an impact on the future.

“This may bring about changes in the attitudes of fathers, mothers, children and employers about the role of fathers in meeting family needs for childcare and domestic work during the working week,” Sonya Krutikova, IFS deputy research director, said. “It may serve as an impetus for a more equal sharing of childcare and housework between mothers and fathers after lockdown ends.”

In the meantime, moms might have to take things into their own hands. If you and your partner are both working from home, but you’re doing more of the homeschooling and multitasking, it might be time to work out a new schedule. Talk to each other and your employer about shifting hours so that both of you have the same number of uninterrupted hours and the same number of childcare hours, by working later or earlier in the day. That might be the only way to get through this thing with our mental and physical health intact.

You might enjoy laughing at these unrealistic stock photos of moms working from home. 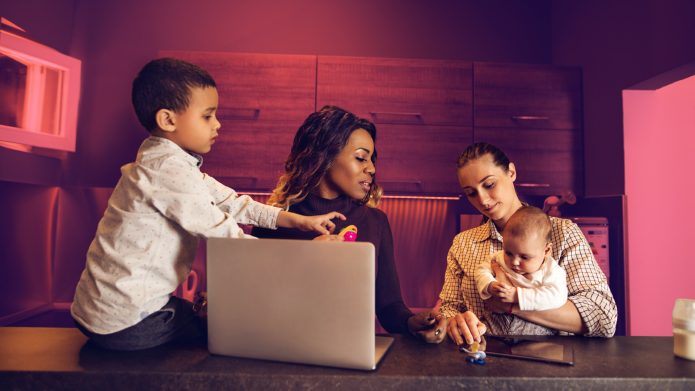 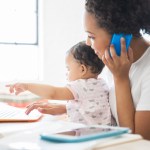 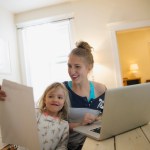 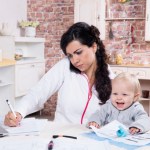 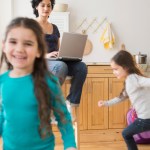