When one parent dies, it can fall to the other parent to step in and pick up the slack in areas where they may not have been as involved before. Sometimes this means stepping outside of their comfort zones and showing an interest in activities or things that may have usually been handled by their partner. There’s normally a lot of grace extended to these parents because we all know how hard it can be to learn something new, or get involved in something that you’re really not that interested in to begin with. But when it comes to understanding the complex issues about your child’s race and how it differs from yours, that grace only extends so far. 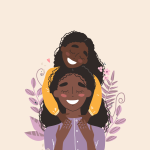 For My Black Daughter, Eurocentric Beauty Standards Are Weapons

Redditor LaughableLion went to the AITA subreddit earlier this week to get some feedback about a fight he’d recently gotten into with his late wife’s sister. The white widower explained in his post that before her death, his Black wife handled the haircare of their three daughters, who are now ages 5, 6, and 8. But, since his wife’s death four years ago, his sister-in-law has been taking his girls to a hair salon whenever they needed a cut. However, since the pandemic, she has been unavailable, so the task of maintaining their hair has fallen to him.

“Well two of my girls hair started to get really matted, and it basically came down to the fact that I was not keeping up with things, I admit,” he wrote. “Their hair was getting out of control, so I just decided to cut it by myself and figured it would grow back by the time they got back to school and stuff. I cut it really short, but it did not look too bad as I was following a Youtube video.”

The original haircut was months ago, but Lion says his oldest daughter is still upset about it. Fortunately, now that the pandemic has slowed down, his sister-in-law is back to helping with their hair needs, but his choices have raised some questions. “However, the other day when she was at my house, my SIL asked my oldest daughter why they decided to cut their hair so short and she responded with the whole story about how their hair got matted and their dad (me) made them,” he writes. “Well my SIL was angry and implied in front of my daughters that because I was white, I couldn’t understand them (my [SIL’s] really into social justice). I yelled at her because I really try my best to fight racial stereotypes and stuff, and I certainly don’t want my kids to think that I love them less because of their color.”

Although the two have since apologized for their heated exchange, OP’s sister-in-law still says he’s in the wrong for the way he handled their haircare. “AITA for cutting my daughters’ hair really short because I didn’t know what else to do?” he asked.

We honestly don’t know what’s more embarrassing for OP: the fact that he came to the internet to share with the world that he’s smart enough to go to YouTube for a tutorial for cutting hair, but not smart enough to do a quick google search to find out how to care for his daughter’s hair or the fact that he didn’t see the intense backlash coming his way.

“Seriously, he marries a Black woman, learns nothing about natural hair. Proceeds to have kids with her, still learns nothing about it, she passes away, he still refuses, hands it off to family members,” writes scarletnightingale. “Then finally when there was no one else to hand it off to and he came down to learning how to take care of his daughter’s himself, he still couldn’t be bothered, let it become matted, and did a hack job so he wouldn’t have to deal with it.”

“YTA,” writes Ok_Sympathy6395. “You have had biracial children for eight years. You are eight years late in learning how to do their hair. There is zero excuse for not doing so, and your daughters are suffering the consequences.”

User Efficient_Success_75 makes the excellent point that help was just a phone call away the entire time, if only OP Had thought to pick up the phone. “YTA – you could have gone to any drug store and bought suitable products for their hair. You could have spent five minutes and googled products to use,” they wrote. “You have YouTube. Also you could have called/Zoomed with your SIL and asked her for advice.”

And while some responses did offer sympathy, they were still quick to point out how colossal of a ball drop OP’s move really was. “YTA: you’ve had eight years to learn, four years that you REALLY ought have learned, & one year where it was crucial for you to learn,” wrote Gildedragon. “Learn now. like REALLY learn. find out as much as you can.”

We hope OP took all of this to heart, followed a lot of the really good advice he received, and started looking for other areas in his daughters’ lives where he needs to do better.

Maybe this dad should check out some of these books featuring girls of color to try and see what else he’s missing when it comes to the needs of his daughters.