I’ve made many a public tongue-in-cheek complaint about my son’s nearly impossible Santa lists. This year, prompted by Google image searches on his favorite book characters, his number-one request is a Funko Pop! Luna Lovegood figure wearing Spectrespecs — which, it turns out, was issued in 2017 and is available only on secondhand markets as a collector’s item. I used to think the toughest part of Santa’s job was making it to all those houses in one night. Now I realize it’s deciding between eBay vendors in Beijing whose wares may or may not make it across the world in time.

I should be thinking about more important things this Christmas. I’m actually writing this while isolating from the rest of my family in my bedroom as I recover from COVID-19. (Nope, no idea how I got it. I go nowhere.) The world outside is still on fire, and too many families are going hungry this winter. But that’s also why I’m stressed about making Santa happen this year. At 7, my son still deserves all the magic he can get.

The idea of Santa Claus means more to me than is logical. I was raised in an atheist household by a former Catholic mother and a, let’s say, culturally Jewish father. But even atheist kids find a way to develop their own belief systems, and mine involved unicorns, monsters in the dark, and Santa. While I personally never believed a god or gods controlling the universe, I could imagine smaller miracles. And though for most of the year, I tried to be kind and good, you know, “for goodness’ sake,” it was helpful at the end of the year to have a little motivation — to know that there was an all-seeing magical being who would weigh in on whether I deserved a Barbie Dreamhouse. 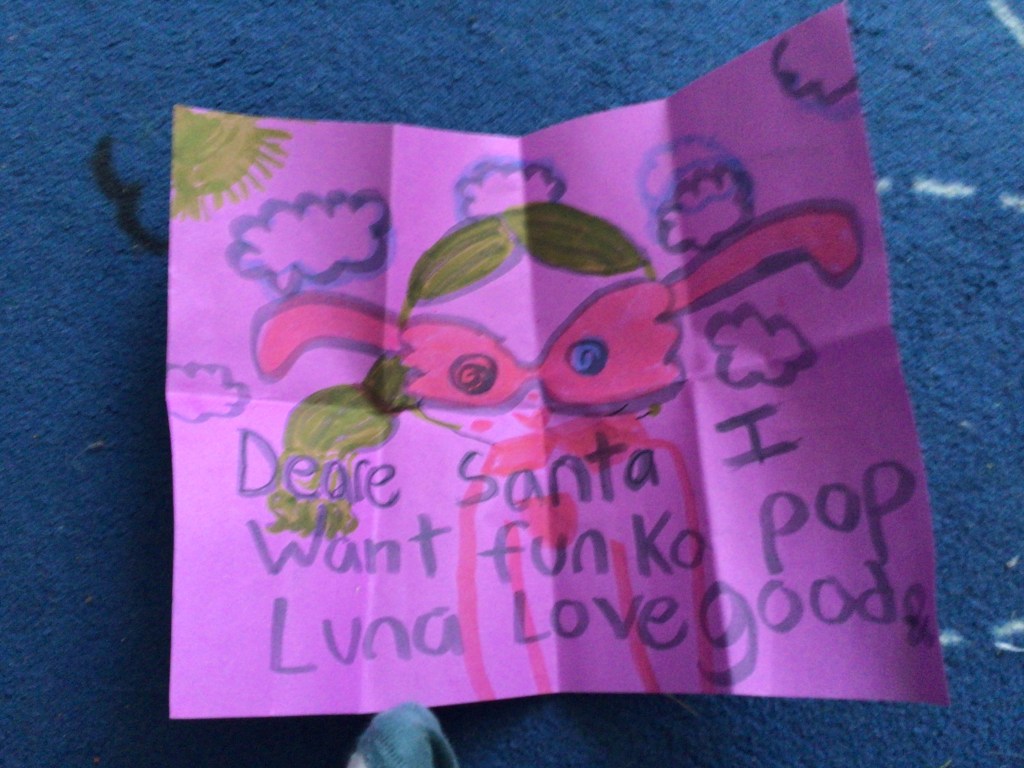 Then I remember the ambivalent time I had between whole-hearted belief in Santa and knowledge that it was all just another fairy tale. I willed myself to believe, even as I didn’t, because as a strangely nostalgic child of 8 or 9, I knew that once I let go of Santa, I would be losing a part of my childhood.

My son’s belief in Santa, unicorns, and magic, is pretty similar to my own at his age (albeit with the addition of our quarantine pet, invisible flying teacup poodle named Mr. Cupcakes). Earlier this year, he figured out that his dad and I were the Tooth Fairy, after a friend of his spilled the beans.

“Does that mean you’re Santa, too?” he immediately asked.

I froze for a second, not wanting this to be happening so soon.

“What do you think?” I said lamely.

Relief flooded through me, even as I realized that he is probably in that liminal space between belief and wanting to believe. Exhibit A: He told us a couple weeks ago that he changed his mind, and that the Tooth Fairy IS real. “You guys were just making up that it was you.”

Is this what religion is like for other people? A constant negotiation between the evidence and knowledge you have, and your desire for there to be something bigger behind it all? Well, I’ll leave aside those theological debates.

I’m just grateful to have at least one more year of paying extra for shipping the last-minute outlandish gift that has suddenly become his heart’s ONLY desire. (Thankfully, these gifts are never expensive, just obscure.) It’s a powerful thing, knowing I can create magic for someone, even if I’m just doing it with my credit card. I am thrilled to have one more year of leaving out cookies and milk, choosing a different wrapping paper just for the Santa gifts, and disguising my handwriting in labels and a thank-you-for-the-cookies note.

This pantomime connects me to the magic my mother once made for me. It reminds me of the Christmas when instead of jingle bells and hooves on the roof, I distinctly heard my parents in the basement for hours, building high chairs for our dolls out of PVC pipe. The next morning, when they’d given all the credit for their hard work and creativity to a jolly old elf, I didn’t call them out on what I knew. I accepted their act as a gift of its own.

When the jig is finally up, and he stops believing in Santa altogether, I’m pretty sure I’ll be the only one saddened by this loss. He’s not nostalgic like I’ve always been; he gives away formerly favorite toys without a second thought. My husband’s Jewish and really does not get why I’m so invested in this commercially manufactured mythology. But for me, saying goodbye to Santa going to mean an irrevocable step forward into the future, into reality and all its flaws, and away from wonder and innocence. Those are gifts that children give to their parents, and we often forget that they’re just temporary.

But here I am, already nostalgic for my present moment — in quarantine, no less! And nostalgic for tomorrow, when I’ll be released at last, with one more day to buy some special Santa wrapping paper, in the hopes that reindeer have managed to transport that Luna Lovegood doll from China in time.