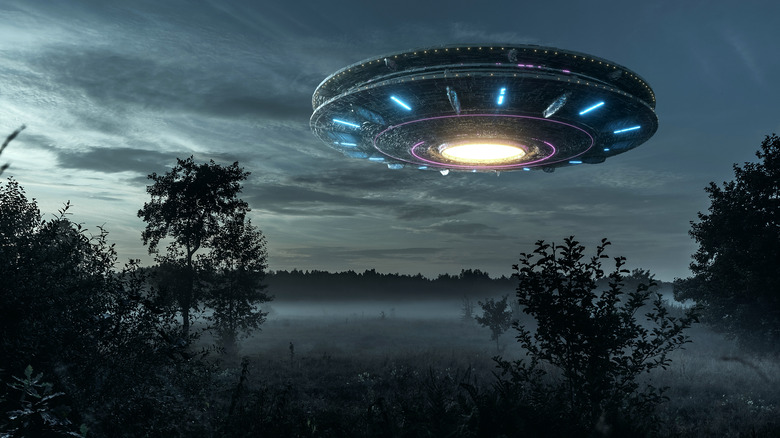 Whether or not you keep a dream notebook, living out storylines while you sleep means something about your brain and day-to-day life. Not just reserved for astrologists and the tarot-card-obsessed, dream analysis is backed by science, at least as a “data dump” or to make sense of experiences. People have been thinking about dreams since the ancient world: as per Time, ancient Egyptians “thought of dreams as simply a different form of seeing,” with intuitive seers planning wars around dream analysis. Meanwhile, the ancient Greeks and Romans thought dreams predicted the future, or were “visitations by the dead.” Today, dreams are a partner to astrological charts in understanding why we act the way we do – and they’re sometimes more significant than we could imagine.

While science doesn’t back dreams as fortune tellers, it does delve into the reason we dream in the first place. While Nobel laureate Francis Crick saw dreams as mere “garbage disposals” to clear away or purge our daily lives come bedtime, other theories see dreams as a way of compartmentalizing new information we learn each day. Similarly, the Threat Simulation Theory sees dreams as “preparation for real-life threatening situations,” making those “running away” nightmares a virtual bootcamp (via Psychology). And sometimes, things are more literal: Sigmund Freud saw dreams as symbolizing desires, thoughts, and wishes (via Very Well Mind). Since dreaming of aliens is far from literal or part of our day-to-day, it makes sense that intergalactic dreams are all about the unconscious mind.

The symbolic meaning of aliens in dreams 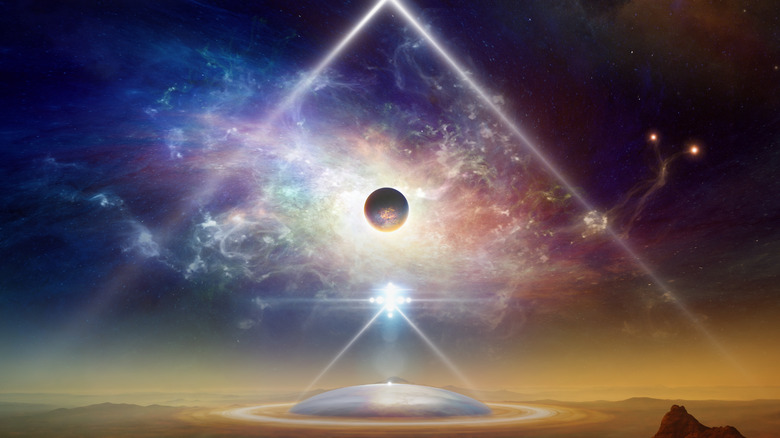 Whether you dreamed you were grocery shopping with E.T., fighting an intergalactic war, or seeing a UFO from a distance, each kind of alien dream has a completely different meaning. Still, there’s a general explanation behind seeing aliens come bedtime — and it’s pretty surprising.

According to Dream Astro Meanings, dreams about aliens are uncommon. Chances are your alien dream might “symbolically represent” your “connection to the higher realms” — whether a need for more spirituality in your life, or to the big unknown. The outlet also explains that the general meaning of seeing an alien in your dream is related to isolation and loneliness, since by definition, an alien comes from a foreign place (or orbit) and is seen as different. If this clicks with you, you should take this as a reminder to “begin building relationships with others and opening yourself towards the world.”

Aunty Flo says alien dreams are connected to a “supreme intelligence,” and desiring a life that defies convention. There might be a part of your personality that is still alien to you, and your dream might be related to you neglecting that side of yourself. As explained by Jung Page, psychoanalyst Carl Jung believed that man projects “his inner state into the heavens,” whether thinking about ancient gods or aliens. We see aliens as a possible reflection of us, so seeing one in your dream is all about wanting to get to know your inner self better.

Dreaming about being an alien 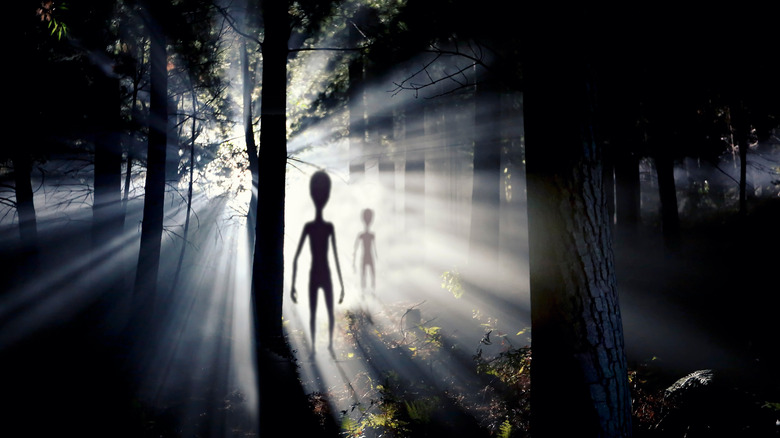 Instead of getting a glimpse of mysterious crop circles, a high-tech space ship, or an eerie green creature, you might have dreamed about being an alien yourself. Whether you looked in the mirror and saw a neon alien lifeform, were a top-secret alien that still looked exactly the same, or landed on an unknown planet as an invader, dreaming about being an alien represents how you feel about your social life and image. As per Aunty Flo, “if you dream that you are the alien, it means you are feeling like a stranger in social gatherings,” and are thinking overtime about your place in the world and how to fit in. This kind of dream probably means you are hoping to find new friends, and seeing yourself as any kind of unfamiliar creature probably means you need to arrive at a new stage in your life soon.

Similarly, Dream Christ explains that being an alien in your dream means you’re thinking about new problems, but they are usually not too serious. According to Dream Astro Meanings, this kind of dream presents “hidden or undiscovered parts of your personality” or a “desire to change your reality.” You might feel like an outsider, even towards the people closest to you. In this case, you should look for new friends, or for people that understand you wholly; dreaming about being in an alien environment is actually a good sign you’re making the necessary changes already.

All about UFO dreams 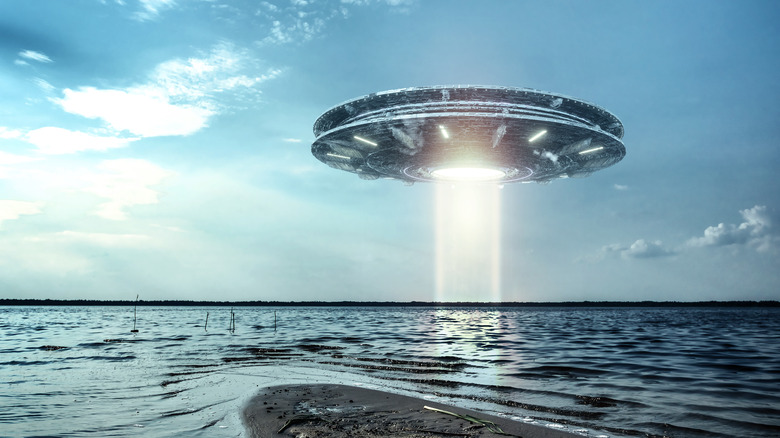 One of the most common kinds of alien dreams are those that include UFOs, the symbol many of us first think of when discussing extraterrestrials. So what does it mean to see UFOs in your dreamscape? Luciding explains that seeing a UFO means you’re probably facing an unfamiliar situation you’re nervous about – you can take this as a sign to trust your intuition. Meanwhile, Dream Christ says that people who dream about UFOs are usually extremely creative, and are on the hunt fr new ideas. Your surreal spaceship sighting means you are searching for development spiritually and professionally, but might need to slow down and stop thinking so much about the future. Also, think about how you felt in your dream upon seeing the UFO: fear could mean loneliness in your life, while calmness just means you’re looking for a new direction.

UFOs are a hot topic right now, with the U.S. national intelligence community releasing a long-awaited official report about them back in June that included video footage of strange objects in the sky (via The Washington Post). Whether or not you believe the hype, a UFO dream is about exploring your own enigmas, especially what you “find difficult to identify with” (via Cafe Au Soul). Similarly, dream analyst Jane Teresa says that spaceships in dreams serve to “remind you that however far you banish certain experiences and feelings … they still hover, as UFOs.” As per Aunty Flo, this dream might also mean “new beginnings are afoot.” 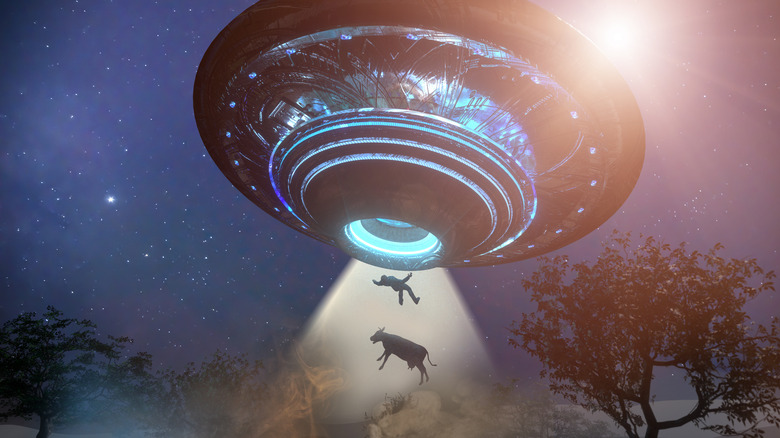 Let’s say you dreamed about getting abducted by aliens — whether caught in a UFOs super-magnetic pull, or captured by the scaly hands of extraterrestrials themselves. While you probably woke up from your nightmare in a cold sweat, not all alien abduction dreams have a negative connotation. According to Female First, being abducted by aliens in your dream might represent an inner desire to “escape from a current situation or your life in general.” You might be craving more of a challenge at work, or to end a relationship that has taken its course. Maybe you’ve lived in the same city your whole life and want to experience something new — whatever your situation, alien abduction is all about change.

Still, an alien abduction nightmare can represent something distressing in your life, too. Aunty Flo explains that alien kidnapping dreams mean you might “feel oppressed and overpowered by a family member,” or you’re facing a serious challenge. It can mean you have enemies nearby that you should be wary of, or might be feeling abandoned lately. If your nightmare was extra creepy and you were beheaded by aliens, you might have to keep a clear head (you can say that again!) and forget about your worries. As per Dream Christ, being abducted with other people “indicates emotional involvement and protection from others,” a true positive sign. And if you dream of aliens abducting other people, Dream Astro Meanings explains that could mean joyful times coming your way soon. 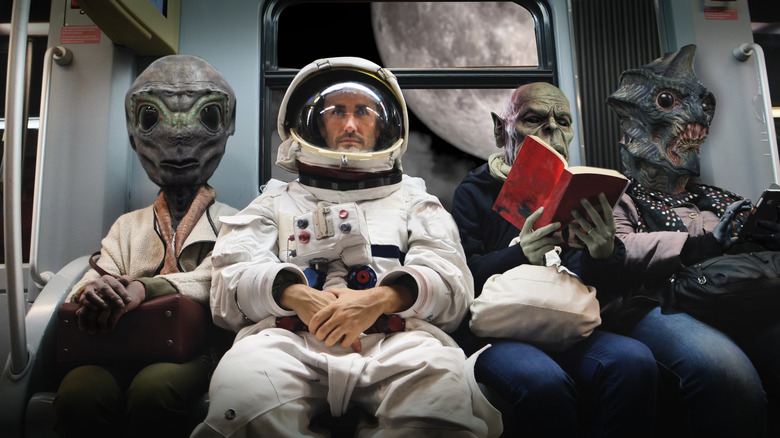 You might have dreamed you had a run-in with your own version of E.T.’ a sweet, more-than-strange creature who just wanted to see the world. If you dreamed of a cute monster rather than your very own version of “Alien vs. Predator,” then rest assured — your dream probably symbolizes positivity in your life. Aunty Flo explains, “friendly aliens in dreams can suggest you will have a wide range of social events coming up.” Even if you normally feel like an outsider, this kind of dream shows you’ve paved the way to become a social butterfly. Plus, somebody you know might offer their help soon. A friendly alien is a symbol for socializing and is all in all the most positive kind of extraterrestrial dream.

Female First agrees, adding that speaking to an alien in your dream means you’re ready to meet someone who will “show you new things and be a breath of fresh air.” Dream Astro Meaning adds that talking to aliens means you will finally resolve a looming issue in your life, with Aunty Flo explaining that conversations with aliens usually mean finding “a solution to a problem.” It could also mean you should venture out and get advice from a close friend about your difficulties. Since dreams can get weird, you might have dreamed you had an alien baby: as cute as it probably was, that can represent instability in your waking life.

The meaning of alien invasion nightmares 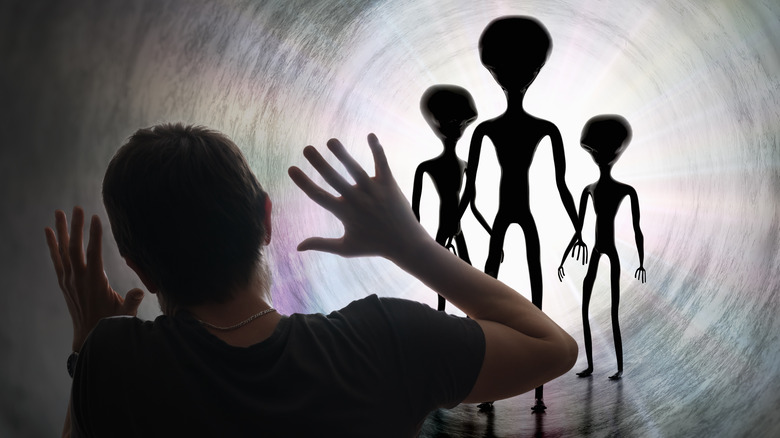 While the idea of an adorable alien companion is all we could ever want in a dream, usually, our extraterrestrial sleep narratives are on the scarier side. If you’ve watched “Alien,” “10 Cloverfield Lane” or “Prometheus,” chances are, your brain will quickly make your dream’s aliens downright-frightening. So what does a foreboding alien invasion dream mean?

As much as you watched “Lilo and Stitch” growing up, you might have dreamed of extraterrestrials that want humans — not tuna-peanut-butter sandwiches. Alien invasion nightmares are common, and deeply significant to your waking life. As per Female First, it all has to do with fear: an alien invasion dream might mean you fear losing your loved ones. Luckily, this kind of nightmare can make you realize your stress about the future, giving you a sign to meditate. Dream Astro Meanings sees alien invasion dreams as a symbol of feeling under attack, indicating “insecurity and lack of confidence in your abilities.” According to the outlet, dreaming of an alien attack on the world means you might be “refusing to make some inevitable changes in your life,” or that you’re stopping yourself from enjoying what life has to offer.

This kind of nightmare can stem from fear of losing your home, or of someone “invading your private space” — whether emotional or physical. As per Dream Christ, if you dreamed of aliens in your house, you might be craving privacy and being alone.

Dreams about fighting with aliens 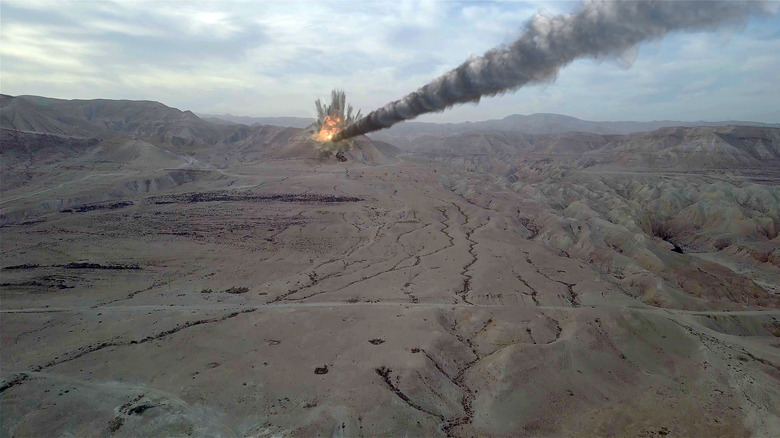 If your dream involved you grabbing weaponry, shields and a space suit to kick aliens right back to their planet, you might have woken up feeling pretty good about yourself. While we can only hope we’d have the moxie to face aliens head-on, dreaming about fighting with aliens is deeply significant. According to Dream Christ, this kind of dream might mean “you are suffering from a moment of depression because of work and emotional problems.” Have you felt an uptick in anxiety lately, or do you feel lost when it comes to important decision-making? The outlet explains that fighting aliens in your dreams usually means that you’re frustrated and need to make a change in your life to feel happiness.

If your dream involved being chased by aliens, Dream Astro Meanings says it probably means you need to “stop postponing and avoiding your duties” and accept reality. If you had a nightmare about alien torture (eek!), the outlet says that may signify you have to deal with the consequence of past actions. If you viewed alien in-fighting from afar, that could symbolize minor setbacks. Aunty Flo says this kind of dream is negative, and may “indicate minor misfortune” or lack of control. All in all, alien fighting dreams should incite you to make positive changes in your life, and to finally “increase your self-esteem and skills to make your own decisions.”