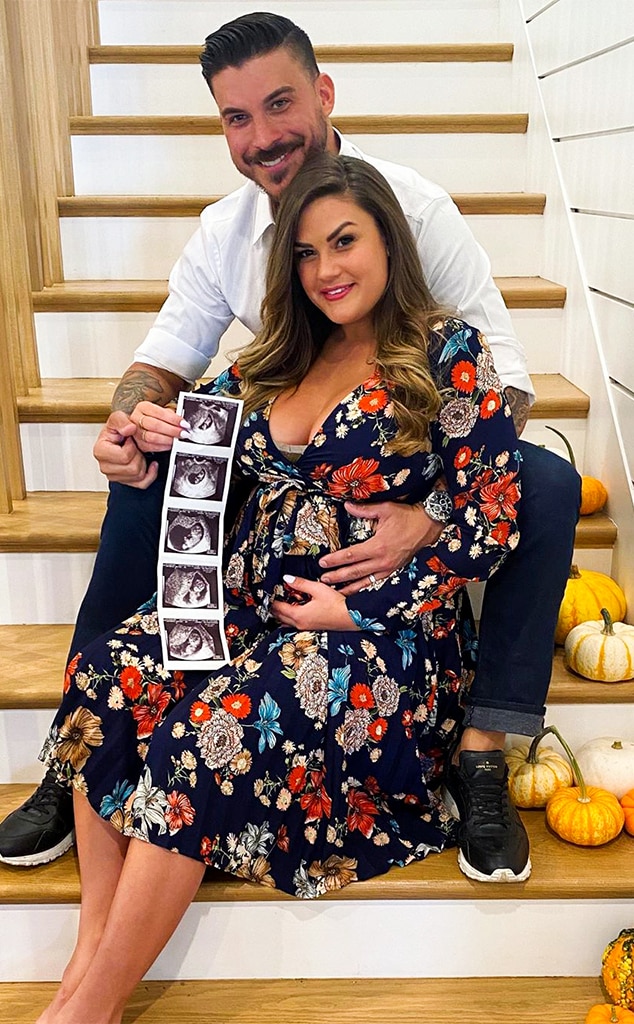 The Vanderpump Rules family is growing.

After getting married a little over a year ago, Brittany Cartwright and Jax Taylor announced they're taking their relationship to the next level. On Monday, Sept. 21, the Vanderpump Rules stars shared that they're having a baby.

"Mom & Dad. The love of our lives is coming soon," Brittany captioned her Instagram post, with Jax writing, "Sooooo,……..I am gonna be Dad.."

This marks the couple's first child together. Back in April, they opened up about wanting to start a family to E! News' Justin Sylvester.

"We're going strong. We're hoping that we can get a quarantine baby out of this," Brittany shared on the Just the Sip podcast. "We're ready to go."

Jax added, "I wasn't sure at the beginning. I was like I'm not sure this is a good idea. I don't know how long this is going to go on. I watched The Walking Dead. I saw what happened when they got pregnant. I was scared. I was like what if we won't be able to get to the doctor? But I put all of that past me."

The couple has candidly discussed children throughout their romance. In September 2018, Jax was offended after a fan asked when he and Brittany planned to start a family.

"Why? Can I get married first. I hate when people say it's time to get married time to have a baby," he wrote on Twitter at the time. "How about time to worry about yourself and Not tell me how to live my life. I am sure your not perfect why don't you worry about you. So f–king annoying."

A month later, he had a change of heart with a caption that read, "I gotta be honest, I can't wait to take my kids trick or treating and or stay home and pass out candy!! It's the dream!! Very soon!!!"

In a January 2019 episode of Vanderpump Rules, Brittany told co-star Ariana Madix, "I can't wait to start a family. That's just something I've always been so excited about. Jax is like, 'As soon as we get married, we are going to start,' 'cause he's gonna be 40."

Jax added, "As soon as we're married, we're gonna start right away. I'm 39. I can't wait too much longer because I don't wanna be, the kid's in high school, I'm gonna be like 60 years old."

He said he wants a maximum of two children, while Brittany said she wants three.

Brittany and Jax aren't the only Vanderpump Rules stars share baby news. Lala Kent recently shared she was pregnant and expecting her first child with fiancé Randall Emmett. Over the weekend, she revealed they were having a daughter.

That same month, Stassi and Kristen Doute were fired from the reality TV show after former cast member Faith Stowers opened up about her alleged experience as the only Black woman on the Bravo series.

During season six of VPR, which aired in 2017, Jax cheated on Brittany with Faith. After Bravo cut ties with Stassi and Kristen, Brittany took to social media to defend herself from critics who claimed she played a part in Faith's negative experience on the show.

"I haven't spoken to her since the night I found out [Jax cheated], and I did not say anything about nappy hair," Brittany wrote in June. "I yelled at her and did that rightfully so like any other human being would if they had just found out what I did. If she ever even tried one time to apologize to me I could have forgiven her like I did Jax but she never did or even showed remorse for how bad she hurt me."

Also, around that time, former Vanderpump Rules star Billie Lee accused Jax of not wanting to film with her because she's a transgender woman. Jax has yet to publicly address the allegations.