Tom Brady is gearing up to spend his first Christmas without his kids, and he’s doing his best to focus on getting his head in the game ahead of the major change in how he usually celebrates the holiday.

The NFL quarterback continued, “It’ll be a new experience that I’ve never had before that I’m gonna learn how to deal with. And I think that’s what life’s about.” In addition to being the first Christmas he won’t spend with his kids, this holiday will also be the first Brady has spent playing for the nation on the football field, despite his lengthy career.

It won’t be an unhappy holiday, though, as Brady clarified that he won’t miss Christmas with his kids entirely — it’ll just be a little later than usual. “[I] look forward to celebrating Christmas with my kids the day after, which is, you know, just part of what football season has been for a long time,” he said.

Brady and supermodel Gisele Bündchen finalized their divorce in October of this year after months of split speculation from the public and media. The duo had been married for 13 years, and they share two kids, Benjamin, 13, and Vivian, 10. Brady also shares a son, Jack, 15, with ex-girlfriend Bridget Moynahan. 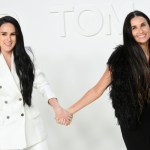