Toddlers have the sweetest hearts. They’re often the first to share their soggy, half-eaten cookie with you or give you a big snotty-nosed kiss when you’re feeling down. These acts of love may be messy — but they’re delivered with the best intentions. Most of the time, this is cute, but sometimes your toddler can go too far. This one mom on Reddit shared how her 3-year-old son scribbled all over the walls as a “gift” to his dad, and people took to the comments to praise her for staying calm.

“I’ve been painting a mural for my unborn baby’s nursery and my son (3M) has been watching and helping me do it,” the mom wrote on the “Am I The A—hole?” subreddit. “He knows it’s a gift for his little brother and he wanted to do the same for his dad so he went into his home office and scribbled all over the walls while my mother-in-law was watching him.”

OK, you can’t deny this is sweet. He’s helping his mom paint a mural (on the walls!) for his new baby brother. Everyone is so excited about the baby, and he’s probably having a blast helping out. So, he wanted to show his dad he loved him too, so he goes to do the same thing. It show initiative and creativity and love — but it’s also so damn annoying, too.

Let’s just say, her husband was not impressed. “When we saw what he had done, our son was really excited but I think my husband was in shock because he was just looking at the scribbles without saying anything,” the mom continued. So she did the first thing that popped in her head: “I told my son good job and that it looked really pretty but he needed to use paper next time instead after he said he made a present for his dad.”

I love how she isn’t discouraging his artistic side or his motivation to give his dad something, but she’s still gently correcting him and telling him to use paper. It’s annoying, sure, but also kinda cute. Unfortunately, the husband didn’t agree.

“My husband never said anything in front of our son but when we were alone, he was upset that I said ‘good job’ to him because he doesn’t think I should be praising him for vandalising his office,” she wrote. 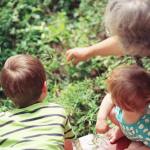 The mom continued: “I told him he just wanted to do something nice for him and we could have the office repainted or I could turn it into a mural if he wanted me to but he’s still upset at me for encouraging his behaviour and he keeps locking his office so our son can’t go inside again.”

I get being upset about the office, but it sounds like your wife is an actual artist — why not just take her up on the offer to fix it? Calling it vandalism is a little extreme…

Some Redditors disagreed with the mom’s reaction. “There is a middle ground between saying ‘good job’ and punishment,” one person wrote. “You should NOT have praised your son for drawing on the walls. Husband is right here. YTA.”

But many others praised the mom for her parenting instead. “Hell nah. NTA,” someone else wrote. “Teaching children healthy boundaries is NOT the same as punishing children for trying to do good. You will do way more to harm their confidence and willingness to go out of their way to do nice things if you flip what they think is a nice present into a scolding.”

They added: “OP handled it beautifully, and legitimately, who has children and actually gets upset at scribbling on walls? It happens. Inevitably. If you have kids, you need to be emotionally prepared for them to break, ‘vandalize’ and misuse things, and to be gentle with them when it happens.”

I agree with this completely. The toddler was in the wrong, but how is he supposed to know the difference when his mom is doing the same thing for his little brother? Plus, scribbled walls comes with the territory — it’ll be a funny story you can laugh about later.

Someone else said, “I think that the Dad calls it ‘vandalizing’ is bizarre. She’s painting a mural so there’s really no way for the kid to know that it’s not appropriate for other rooms or that what he’s doing is different (not at 3, developmentally, this is an age where you have to explicitly explain a dog isn’t a cat usually etc—children’s brains lump things together and don’t see these differences from a cognitive sense). I think Mom explained not to do it and what to do instead so did not suggest the child do it again, but why make the kid feel bad at all? The kid logically didn’t do anything he could’ve known was wrong.”

“The 3 year old was acting in a developmentally appropriate way,” another wrote. “At that age, a child has basically no impulse control. They cannot differentiate on their own between when it’s okay to draw on walls (mural nursery) and when it’s not, and even if they could, they likely wouldn’t have the control to stop themselves drawing on the wall when they really want to. That’s why you supervise a child with crayons or markers. It is not appropriate to expect a 3 year old to intuit boundaries and hold them for himself. They cannot do that. Asking them to do that is like asking them to drive a car – it’s not the toddler’s fault when the car is wrecked. Explaining and holding boundaries is the caretaker’s job. If a 3 year old gets into something you don’t want them to get into, that’s a great learning opportunity for the parent or guardian on how they should have done more childproofing or supervision.”

Others shared similar things they did as kid, and their parents’ reactions. “This reminds me of when I was around that age and my mom was stressing about making the Christmas breads,” one person said. “So I decided I would just do it. I had been helping her do it for years, so I figured I should be able to handle it. Well, they turned out pretty horrible. But my mother laughed, told me she appreciated my want to help, and then we remade the breads and she showed me where I went wrong.”

“She could have very well yelled and been upset and killed my love of baking,” they continued. “Instead she took a different route and we made memories. OP didn’t want to kill her sons creativity or desire to do something nice for someone. Hence the good job and next time we use paper instead of the wall.” This is a very cool moment that turned into a bonding experience instead of a punishment!

“I did this when I was about 13. Not scribbling on the walls, but my dad had bought some paint to redecorate the lounge. I decided to help out by decorating while he was at work,” another person wrote. “He walked into a blue lounge. All walls, doors, every paintable surface. Plus bonus splatters on the carpets and furniture. His response was ‘well…I did say I wanted it blue’ and we spent the weekend fixing it up.”

They continued, “When my dad was telling his friend about this event a couple of years later, the friend exclaimed ‘If that was me he would have been grounded forever’, which is when he dropped one of the most valuable parenting tips I ever got: ‘The execution might not have been great, but the intent came from a good place.’” Ah, I love that! Intent is a big deal, and for this kid (and the OP’s toddler!), the intent was definitely one of love.

This mom is trying to cultivate a love of creativity and generosity in her child (which is where the “good job” comes in), while also setting a boundary and redirecting him to use paper next time, which I think is great. I also think it’s great that the dad is setting his own boundary by locking his office door. Raising toddlers is complicated, but staying calm and treating them with love (especially when they get out of hand!) is the best thing you can do.